There's no shortage of buzz surrounding Google's (NASDAQ:GOOGL) new $35 Chromecast. The small dongle has already soared in popularity, thanks in large part to its aggressive price point and targeted functionality -- exactly addressing the two reasons why its spiritual predecessor failed immediately. Chromecast is sold out everywhere, a sign that Google nailed the value proposition and has a good shot at segmenting the market for streaming devices.

At $35, Chromecast significantly undercuts Apple's (NASDAQ:AAPL) current set-top box, which costs $99 new. Potentially in response to the competitive threat, Apple has now reduced the price of refurbished Apple TV units by $10, bringing the price tag to $75 and partially closing the gap. The seemingly minor move could be an acknowledgment that Apple has more aggressive TV strategies in store.

However, it's unlikely that Apple would get much more aggressive on price, especially on new units. The company has never focused primarily on price competition, which would put its premium brand at risk. Instead, Apple typically remains content to price above competitors if it feels confident that it has a better overall offering.

After Google's first TV foray flopped, Apple capitalized on the opening to grow a large installed base of Apple TV users, grabbing over half of the relatively new market last year. Apple has set the streaming standard with AirPlay, which is the driving reason behind most Apple TV purchases. The Mac maker has built an ecosystem of apps and accessories around its protocol. It has made a lot of progress with getting developers onboard, integrating the feature directly into their apps. 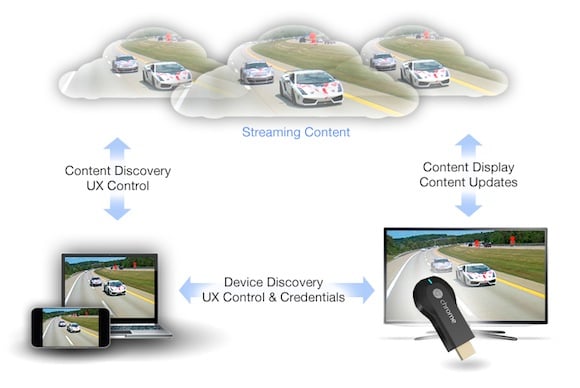 That's a critical step for adoption, and one that Google will need in order to find success. This is precisely why Google also released a Google Cast software developer kit, or SDK, for developers to do exactly that. The Chromecast mania has sparked interest among major content providers, who are exploring possible integration with the device. That includes household names like HBO, Hulu, VEVO, and Vimeo, among others. Several of these content providers already offer service through Apple TV, so Chromecast could catch up fairly quickly in support for third-party services.

Like all new platforms, Chromecast faces a chicken-and-egg dilemma with users and developers. Clearly, users are on board thanks to the low $35 price tag, which is quickly attracting developers. Apple TV has a head start right now, but Chromecast has a real shot at stealing sales from the Mac maker if the Google Cast ecosystem begins to thrive.