General run-down
Second quarter's $11.15 billion in revenue easily outpaced last year's mark of $9.79 billion. Net income dropped, however, from $566 million last year to $553 million this year, largely because of a handful of non-cash charges. Gross operating margin increased 11% to $1.1 billion. Distributable cash flow came in at $925 million, up from $876 million a year ago. Adjusting for one-time gains from assets sales, distributable cash flow provided coverage of 1.4 times payouts, which is excellent.

Digging deeper into Q2
We'll start with a year-over-year comparison of gross operating margin by segment: 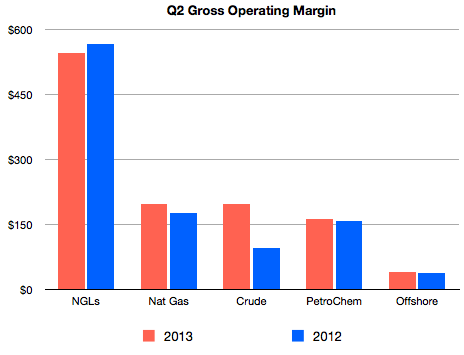 As the chart shows, the partnership's onshore natural gas and crude oil pipelines were the best performing segments, booking operating gross margin of $198 million and $197 million, respectively. Crude oil volumes increased 44% over last year, driven by the Eagle Ford pipeline extension, and increased capacity on the Seaway pipeline. Enterprise's South Texas system is really benefiting from growing production in the Eagle Ford Shale. Volumes were up 154%, leading to a $59 million increase in gross operating margin.

The partnership's petrochemical and refined products segment, which posted gross operating margin of $163 million, is up from $157 million a year ago. Despite the overall increase, this segment's results were really a mixed bag, and a rate case settlement is ultimately what drove the improved performance. Gross operating margin was down for the partnership's octane enhancement and high-purity isobutylene business, its propylene business, and its marine transportation services business. The partnership's butane isomerization business improved due to higher fees, despite volumes slightly below where they were a year ago.

Enterprise's offshore pipeline system posted gross operating margin of $40 million, compared to $38 million for 2012. Natural gas volumes were down, but crude oil volumes were up 9%, driving the growth in this segment.

Finally we have the NGL pipelines and services segment, the lone decliner for the quarter. Most investors were probably expecting this, given the extremely depressed prices for natural gas liquids right now. In that sense though, Enterprise's results were actually not that bad. Gross operating margin for the segment dropped from $566 million last year to $545 million this year.

Bottom line
For an operation so closely tied to natural gas liquids and their depressingly low prices, these results are top-notch. Enterprise's size and diversity wins out this quarter, as revenue, earnings per unit, and distributable cash flow are all up compared to the second quarter of 2012. Additionally, the partnership's distribution coverage ratio remains excellent. All signs point to a bright future for investors.