Investors love stocks that consistently beat the Street without getting ahead of their fundamentals and risking a meltdown. The best stocks offer sustainable market-beating gains, with robust and improving financial metrics that support strong price growth. Does Arrow Electronics (NYSE:ARW) fit the bill? Let's look at what its recent results tell us about its potential for future gains.

What we're looking for
The graphs you're about to see tell Arrow's story, and we'll be grading the quality of that story in several ways:

What the numbers tell you
Now, let's look at Arrow's key statistics. 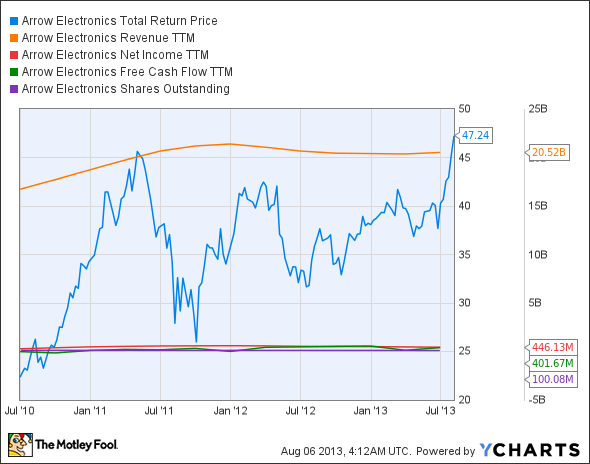 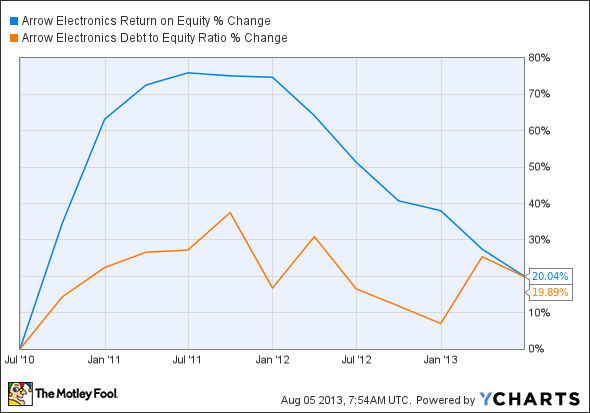 How we got here and where we're going
Arrow flew straight out of the bow with a strong showing, but it was tripped at the start and end of our analysis, which cost it two passing grades. Over the past three years, Arrow's revenue has been increasing steadily, but it hasn't been booming. That isn't enough to call this stock stale, as Arrow earned five out of seven passing grades, and it has a very good chance to pick up at least one more passing grade next time. How might Arrow push its revenue even higher over the next few quarters?

Just this past week, Arrow reported its second quarter earnings, which offered up a 3% year-over-year increase in net revenues to $5.31 billion. However, the high cost of Arrow's restructuring has sent net income plunging by over 21% year over year to $89.9 million. Arrow's Asia-Pacific component sales increased by over 10% year-over-year, while American and European markets impeded overall sales growth because of the same old reasons you've got to expect by now whenever a company points to these regions as points of weakness. Arrow's enterprise computing solutions segment was a standout, as it generated $1.91 billion in revenue, up 12% year over year.

Arrow's ArrowSphere cloud platform which was launched in Europe last year, has also recently been made available to the North American market. With demand increasing for cloud-based services, Arrow has found room to aggressively extend its geographical presence to maintain a competitive edge. In addition to this, the company has also signed a one-year agreement with IBM to provide software training. This will enhance IBM's Big Data analytics and cloud efforts around the world, and it could also spill over into Arrow's own cloud-based segments.

Putting the pieces together
Today, Arrow has some of the qualities that make up a great stock, but no stock is truly perfect. Digging deeper can help you uncover the answers you need to make a great buy -- or to stay away from a stock that's going nowhere.