CoreLogic reported that home prices in the U.S. rose 1.9% in June. Over the past year, low inventory has pushed prices up 11.9%. Home prices have now increased for 16 consecutive months. July's growth moderated from May as a result of the large rise in mortgage rates. 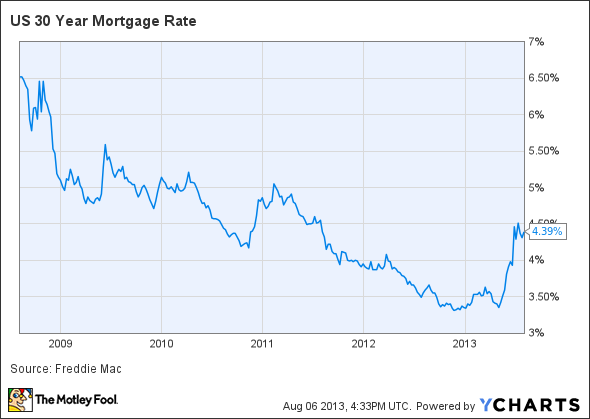 CoreLogic CEO Anand Nallathambi had this to say: "The U.S. housing market experienced robust price appreciation during the first half of 2013 and our forecast calls for double-digit growth through July. Despite their rebound of late, home prices remain reasonable in a historical context, with most states near peak affordability levels."

While it's hard to say whether rising home prices are a good sign for the economy, a lower trade deficit is surely a good sign. Imports fell, and exports rose to bring the trade deficit sharply below last month's $45 billion and analyst expectations of $43 billion. This is the lowest trade deficit since 2009. 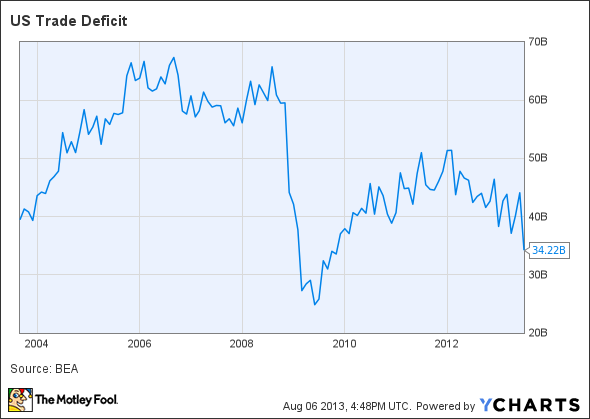 US Trade Deficit data by YCharts.

The better-than-expected trade deficit led some analysts to up their estimates of GDP. The advance estimate of Q2 GDP showed 1.7% growth, but some analysts believe this will be revised upward to 2% growth.

Nevertheless, the market is down today after Dennis Lockhart, president of the Federal Reserve Bank of Atlanta, said the Fed could taper its asset purchases at any of the next three FOMC meetings if it sees signs of stronger growth. Today's trade deficit is surely a sign of stronger growth, so it bodes poorly for the market -- in the short term, at least.

Today's Dow leader
Today's Dow leader is Disney (NYSE:DIS), up 1.2% in anticipation of the company's earnings release, due after today's market close. Analysts expect the company to report earnings of $1.01 per share on revenue of $11.64 billion. Estimize's crowd-sourced estimates call for EPS of $1.03 on revenue of $11.7 billion. Although the company is expected to take a hit from its box-office flop The Lone Ranger and report weaker revenue in its television segment due to poor ratings for the NBA playoffs, ESPN is still one of the most valuable television stations in the world, and over the long term it will remain strong.