The Dow Jones Industrial Average (DJINDICES:^DJI) is continuing last week's slide after an up-and-down morning. As of this writing, the Dow is down 15 points, or 0.1%, partially because of a weaker-than-expected GDP number from Japan that made investors nervous. Right now Disney (NYSE:DIS) is the Dow's biggest loser, down 1.5%, but looking past today's volatility I think Disney still appears to be a solid investing opportunity.

When looking to invest in a company with its hand in so many industries, it's best to have an idea of how each business segment contributes to the top and bottom lines. Disney theme parks and resorts brought in about 30% of revenue last year and include well-known assets such as Disney World, Disneyland, and its Disney cruise line.

Another big part of the Disney story is studio entertainment, which includes the company's film and home video business and accounts for 14% of revenue. Disney's consumer products fill the toy aisles and find themselves in households across the nation, but they only account for 8% of revenue. While the films and toys are largely visible in our everyday life, this breakdown shows us how extremely profitable the Disney you see on TV is.

With a better understanding of Disney's money makers, let's look at some positive aspects of being a shareholder.

Acquisitions and spending
Disney has a proven track record of making great acquisitions that add significant value to its business. Last year's acquisition of Lucasfilm, which is known for its Star Wars franchise, was a $4 billion blockbuster. Years ago Disney acquired Pixar for more than $7 billion in stock, and then it picked up Marvel for roughly $4 billion in cash and stock. Both have provided excellent revenue streams and content, and Lucasfilm aims to deliver on the same level. Disney has also spent money wisely on its theme parks and resorts through two new cruise ships and three new area expansions at Disney World (and rumors of a new Star Wars expansion are being tossed around).

When Disney isn't spending money on smart acquisitions or expanding its products, it finds other ways ways to reward shareholders. Disney increased its annual dividend by 25% to $0.75 a share last December for a yield of about 1.16%. Disney has also unleashed its buyback program over the last few years, and it recently announced an extension to its share repurchase program to the tune of another 400 million shares. The program has significantly reduced the number of shares outstanding. 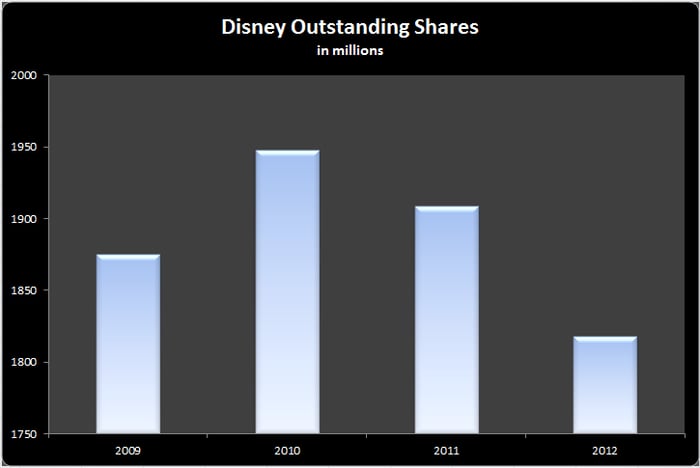 Further proof that Disney spends its money wisely can be found by looking at its consistently improving return on equity, assets, and margins -- which show management is able to turn cash spent into strong earnings. 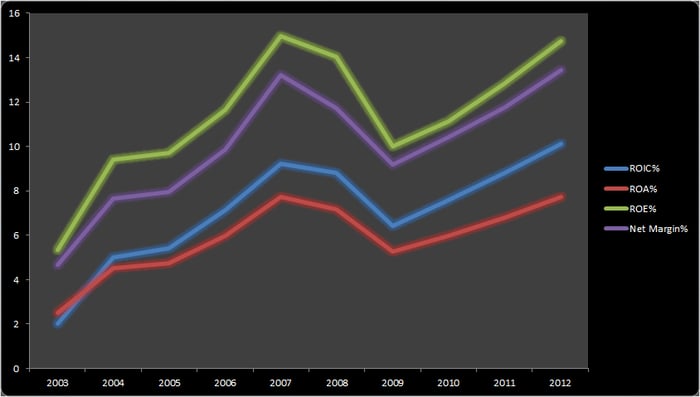 The road ahead
Owning a company like Disney is a good idea for many reasons. It's a well-diversified company with multiple revenue streams. It's financially sound and is finding multiple avenues to reward investors through share buybacks and dividend increases. Disney's brand image is arguably one of America's strongest and most recognized, and that brand keeps people lining up at Disney theme parks even during tough times and enables the company to easily sell products in almost every aspect of a consumer's life -- be it through movies, games, toys, or vacation.

There's reason to be excited for the future, as Disney has plenty of blockbuster movies and shows in the works. Consider that its Marvel acquisition brought with it more than 5,000 characters for Disney's exclusive use. Or consider that S.H.I.E.L.D makes its debut on television this fall, further boosting revenue in Disney's most profitable business segment.

There will always be competition from the likes of Time Warner, or even Fox, but there is no reason to believe Disney won't keep its success story going. Disney's revenue and profit will grow so long as it continues to write compelling stories for its vast amount of characters and expands its use of acquisitions through television and consumer products. There's even room for international growth: Disney plans to open a theme park in Shanghai by 2016. Rarely can you get a company so well-branded, diverse, and profitable with so much remaining potential. For those reasons, Disney still looks like an attractive investment today.