The Dow Jones Industrial Average (DJINDICES:^DJI) looks set to open below the 15,000 mark today. Stock futures as of 7:20 a.m. EDT indicate a 22-point drop at the opening bell -- enough to make the index start below that threshold for the first time since July 5. Worries over tweaks to the Federal Reserve's bond-buying program are pushing markets lower. Exchanges in Europe and Asia fell as investors await a key Fed report due for release at 2 p.m EDT.

Deja vu all over again
Meanwhile, maybe improvement in housing can shake the market out of its August funk. Just as its larger rival Home Depot (NYSE:HD) did yesterday, Lowe's (NYSE:LOW) reported surprisingly strong earnings this morning. Lowe's booked a 10% jump in sales to $15.7 billion in the second quarter and a 26% bounce in profit. Comparable-store sales spiked 9.6%, and the company raised its outlook for the year. The stock is up 4.3% in premarket trading.

Home Depot's results were similarly strong across the board yesterday: The company logged its first quarter of double-digit sales growth since 1999. However, the stock didn't so much as budge on the news.

Investors appear to be concerned over the threat of rising mortgage rates and their potential effect on the home improvement business. But a look at the following graph shows that there's plenty of room for the market to expand from here. 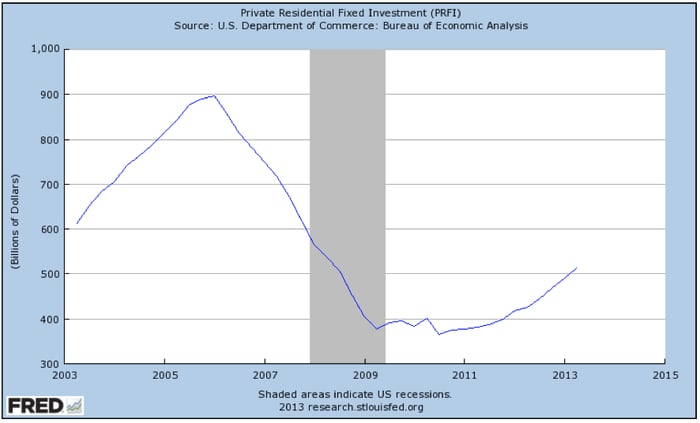 The pace at which Americans have been plowing money into their homes has spiked since 2011. Spending on homes and home improvement is up by more than 25% in the last two years. While that's good news, the figure is still well below the $900 billion annual rate that was set at the market peak in 2006.

Looking ahead
Elsewhere on the Dow, Hewlett-Packard (NYSE:HPQ) is due to report earnings after the closing bell today. Analysts expect HP's profit to shrink by 14% to $0.86 a share in the second quarter. The tech giant has made progress in its turnaround, with sales dips moderating and cost cuts helping it beat earnings expectations for the past two quarters. Still, as the PC market shrinks -- and with the company's stock up 81% so far this year -- HP will need to show investors some evidence of sales growth on the horizon to keep marching higher.