Delta Air Lines (NYSE:DAL) is focused on cash flow generation, strengthening its balance sheet, and improving customer experiences, and it's made good progress in each of these areas. However, that doesn't necessarily make it a good investment.

High fuel costs have led to the demise of many airlines throughout the years. They're often the biggest reason airlines struggle to stay profitable.

Delta is no different. Fuel is its biggest expense. With the average fuel price per gallon rising from $3.05 in 2011 to $3.26 per gallon in 2012, those costs have become a bigger issue.

Anticipating a potential increase, Delta purchased the Trainer oil refinery, which is capable of refining 185,000 barrels per day, from Philips 66. This investment had the same cost as a single widebody aircraft, but it has the potential to reduce the company's fuel expenses by $300 million annually. It will also give Delta a seamless fuel connection in the Northeast, thanks to the facility's Pennsylvania location.

Delta isn't just looking to cut costs on fuel. As part of its ongoing $1 billion cost-initiative plan, Delta aims to trim expenses in various ways, including taking up to 200 of its fleet of 50-seat regional aircraft out of service. These older aircraft require a substantial amount of costly maintenance. The fleet reductions represent just one of Delta's efforts to make better use of its resources and reduce its transportation expenses.

To further cut costs, Delta wants to make its staff more efficient, using technological upgrades to achieve higher productivity goals. This might be a nice way of saying that the company will reduce headcount in order to improve earnings.

At the same time that Delta cuts costs, it wants to improve customers' experiences. Even as it reduces aging aircraft counts, it will also upgrade aircraft interiors with more First Class and Economy Comfort seats (including four added inches of leg room and 50% more recline space), in-flight WiFi, and extra carry-on space.

Delta has also invested in Aeromexico and GOL, giving the airline increased exposure to the two largest markets in Latin America. And Delta took a 49% stake in Virgin Atlantic, which will improve its trans-Atlantic position with 66 connections to North America and the United Kingdom. Both deals increase Delta's potential revenue.

Cost-cutting strategies are a great idea, but they don't mean much without results. While we don't yet know the long-term effects of some of the plans mentioned above, we can take a look at Delta's progress thus far.

Therefore, Delta is seeing a similar situation to many other companies in other industries. Demand isn't increasing, but companies with good management teams are still finding ways to grow the top line, often through price increases.

Delta might be similar to other companies throughout the broader market, but we should take a look at peers for a better idea of industry performance.

Year-to-date, Delta's stock has appreciated approximately 65%, which is much more impressive than United Continental (NASDAQ:UAL) and US Airways (NYSE: LCC), which have seen stock appreciations of 32% and 19%, respectively.

Furthermore, Delta sports a stronger net margin of 4.75%, versus a negative net margin of (1.51%) for United Continental. US Airways is at least in the same ballpark as Delta in this area, with a net margin of 4.36%. That said, US Airways finished even lower in the aforementioned study, with an industry rank of 13th. However, those trading US Airways aren't doing so on that news.

These traders are more interested in the potential merger with American Airlines, which was recently opposed by the U.S. Justice Department, six attorney generals, and the District of Columbia. While Delta's stock is somewhat affected by this news, it's a safer play, since the company's not directly involved with this merger dispute.

Regulators and critics worry that this merger, which would create the largest airline in the world with $40 billion in annual revenue, would hurt travelers by reducing airlines' competition, and increasing their power to hike prices and fees. Therefore, a merger wouldn't just help US Airways and American Airlines, but other airlines as well, including Delta.

Delta's short position of just 2% should be somewhat comforting to investors, especially considering the whopping 26.30% short position on US Airways. However, it's important to remember that airlines don't make good long-term investments. Consider the chart below: 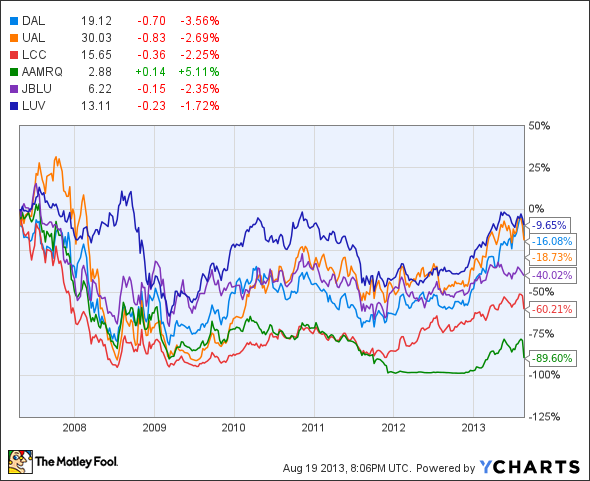 Despite upside moves for airlines over the past several years, based on historical trends, no airline should ever be considered as a long-term investment. While Delta has consistently improved its business by executing on its strategies, the industry as a whole is now seeing downside stock momentum. Therefore, the window of opportunity to take advantage of a good upside trade has likely been lost.