The future of the retail sector has been cast into doubt ever since Wal-Mart and Macy's reported lackluster growth last quarter, with an unexpected decline in consumer sentiment topping off those tepid earnings. However, that doesn't mean that investors should dismiss all retail stocks. In a previous article, I noted that the decline of Wal-Mart and Macy's represents weakened discretionary spending from lower to middle income households, but higher-end retailers, such as Tiffany & Co. and Michael Kors, have been spared thanks to their more affluent customers.

Whereas that disparity can be considered a macro factor, I'd like to take a moment to discuss the micro factors as well, specifically how certain companies have thrived by concentrating on narrower markets. Two companies in particular -- Urban Outfitters (NASDAQ:URBN) and the Estee Lauder Companies (NYSE:EL) -- recently bucked the trend and reported robust top and bottom line growth, surprising investors who had expected consumer weakness to take its toll on makers of kitschy clothing and beauty products.

The decline of the apparel retail industry, especially those company's focusing on teens and young adults, has been well documented. Abercrombie & Fitch (NYSE:ANF) and Aeropostale (NYSE:AROPQ) have been leading the decline, as their once-popular logo-branded clothing have been overshadowed by the rising popularity of H&M and Forever 21, which offer cheaper, trendier fashions refreshed at a faster rate.

Last quarter, Abercrombie's earnings declined 400% as its revenue slid 8.9%. Aeropostale did just as poorly, reporting a 223% decline in earnings on a 9% drop in revenue. Same-store sales at Abercrombie and Aeropostale both fell 15% from the prior year quarter. 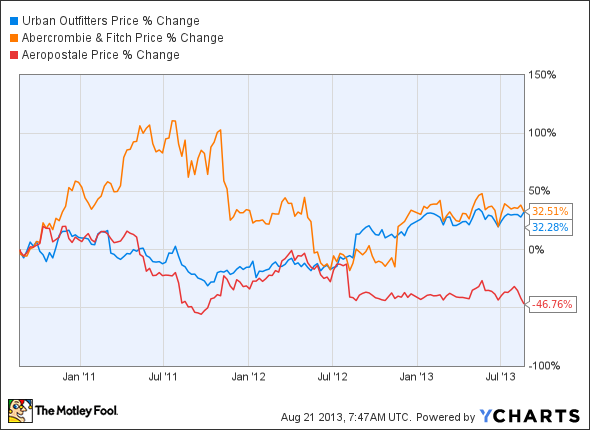 Yet Urban Outfitters surprised analysts and investors with its second quarter earnings, reporting a profit of $0.51 per share, up from $0.42 per share a year earlier and beating the consensus estimate of $0.48. Revenue climbed 12% to $758.5 million, falling slightly short of the $768.1 million that analysts had expected.

However, same-store sales surged 9% across the board, topping the consensus estimate of 8.1%. Same-store sales rose 5% at its namesake stores, 9% at Anthropologie, and 38% at Free People. Those huge growth numbers made it clear that Urban Outfitters is a survivor in a sea of drowning industry peers. The company's digital initiatives, which I previously discussed, are also far ahead of its industry peers, and are helping it keep in touch with its younger customer base through mobile apps and social connections.

Although beauty products are often categorized as discretionary purchases, many women consider them every bit as necessary as groceries and fuel, a fact that was reflected in Estee Lauder's impressive fourth quarter earnings. 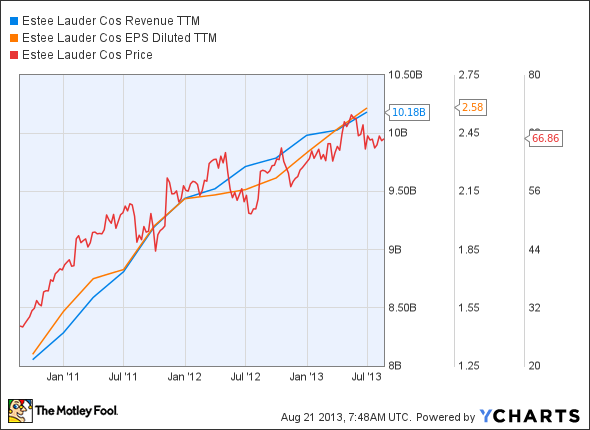 The company expects its current quarter sales to rise 5% to 7%, although profit is expected to come in below Wall Street expectations for $0.90 per share. Estee Lauder attributes the slower growth to weakness in south Europe, South Korea and the United States, exacerbated by higher promotional and advertising costs. Investors, however, weren't too concerned about that cautious outlook, instead focusing on its impressive top and bottom line growth in the fourth quarter. Estee Lauder is also expanding heavily into emerging markets, most notably in Africa, to offset its weakness in developed markets.

Analysts noted that the company appears immune to both an economic slowdown and competition. Morningstar analyst Erin Lash stated, "Estee Lauder has not been swayed by slowing global economic growth or competitive pressures, as evidenced by its continued top-line growth and margin expansion."

Estee Lauder forecasts that the global prestige beauty market, which includes L'Oreal and Coty, will grow 3% to 4% -- a slow but steady pace that still might be an attractive alternative to the current volatility in other retail stocks.

Macro-focused investors might believe that the fall of Wal-Mart and Macy's are ominous precursors to a market plunge, but more adventurous investors should really refrain from tossing out the babies with the bathwater.

Urban Outfitters is showing remarkable growth as its primary rivals are marking down prices in their desperation to reduce inventories and generate revenue. Estee Lauder, on the other hand, is showing slow and steady growth, which shows that beauty products should be considered necessary, rather than a discretionary, purchases.