Every investor has heard the old line "sell in May and go away." That wasn't such great advice this year with the S&P 500 index up nearly 5% since the beginning of May. And even if it were a good idea, it would be too late now if you didn't heed it before summer started.

However, we will enter a new season next month. Since I focus primarily on health care, I'm especially interested in any seasonal effects on stocks in the industry. Maybe we need a new adage, perhaps "health care stocks fall in the fall"? Could this be a better investing mantra? Let's take a Foolish look.

Proxies
If we wanted to do a statistically significant study, we'd need to look at lots of health-care stocks over decades of market history to see if there is any seasonal effect. That doesn't seem like too much fun, does it? Instead of spending more hours than any sane person would give up for an admittedly whimsical effort, I opted to take a shortcut.

Rather than review dozens of stocks, I chose a handful to serve as proxies for the health care industry as a whole. I picked Pfizer (NYSE:PFE) to represent the pharmaceutical group. Pfizer has a huge market cap of more than $200 billion and tracks pretty well with other big pharma stocks.

Health care doesn't consist of pure pharmaceuticals alone, though. We need to throw a biotech into the mix as well. I went with Amgen (NASDAQ:AMGN) as our biotech proxy. It's one of the largest biotechs and has plenty of history under its belt.

It was a tough decision on which medical device company to include. After mulling it over, I thought that we needed to be able to claim that there was at least something scientific about this study -- so I chose Boston Scientific (NYSE:BSX). The company has a market cap of around $15 billion and revenue of more than $7 billion, so it's a reasonable representative for the medical device makers.

We wouldn't have health care in the U.S. as we know it without insurers. I figured we should just go with the biggest of the bunch -- UnitedHealth Group (NYSE:UNH). Generally speaking, as UnitedHealth goes, so goes the health insurance industry.

My final selection for the analysis combines two areas of health care in one stock. McKesson (NYSE:MCK) is one of the largest medical supply distributors but also is a major player in the health information technology market.

Performance
If you recall, we would ideally review decades of market history. That's what I did -- but just barely. I looked at the stock performance for each of the five proxy companies for the fall seasons of 1993 through 2012. There was one exception that should be noted, however. McKesson went public in 1994, so the analysis didn't go back a full two decades for this one stock.

So, do health care stocks fall in the fall? Sometimes, but not usually. 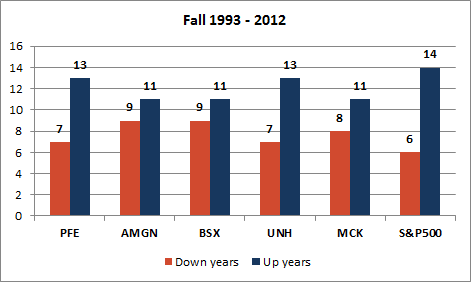 As the chart above shows, all five of our proxy stocks experienced more fall seasons with positive gains than they did seasons with losses over the last 20 years. Pfizer and UnitedHealth did best in the "up years" count. However, none of the health-care stocks had as many positive fall periods as the S&P 500 index did.

Merely counting the number of up and down years doesn't tell the full story, though. Seven to nine down years that were really bad could make those 11 to 13 up years look less positive. 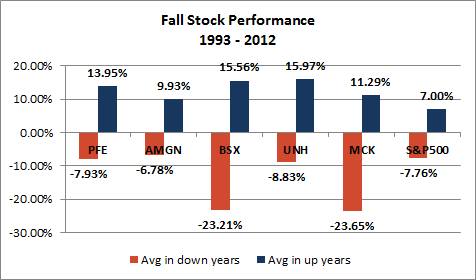 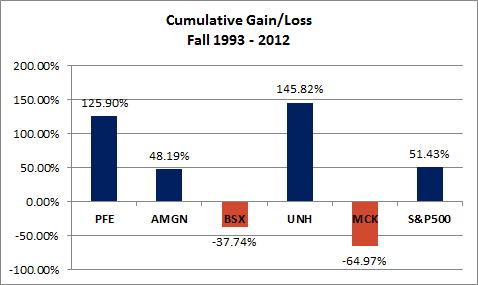 Remember in September
I'm afraid that the "health care stocks fall in the fall" phrase appears to be a bust. Actually, perhaps a better adage might be "buy health care stocks in the fall and have a ball." Some of those fall gains over the last 20 years look mighty tempting. Even that line doesn't work across the board, though.

What this little exercise doesn't show is how well these stocks did over the entire two decades. The worst performer, Boston Scientific, still gained more than 130% during the period. The best stock, Amgen, soared nearly 1400%.

Whatever month it is, if you think with a long-term perspective -- you'll be better off. So, here goes one more stab at creating a new investing line: Remember in September adages fall and burn like timber. You can even use this one in December, but it would be even better to keep it in mind year-round.