It helps to have powerful friends, and very few companies have allies as strong as IT virtualization specialist Citrix Systems (NASDAQ:CTXS). With partners Cisco Systems (NASDAQ:CSCO) and Microsoft helping to push some of Citrix's newer solutions, the company looks well-positioned to grow, even as its core desktop virtualization sales are slowing.

Citrix's changing end market
Desktop virtualization allows companies to centralize their application software management so that their hardware (PCs) become virtual devices. Installing new applications on a single central computer -- and having those changes instantly show up on every employee's PC -- makes managing IT infrastructure a lot easier for big companies.

The big story in computing over the last few years has been the shift from desktop PCs toward mobile devices and cloud-based solutions. This powerful trend has left some tech behemoths, like Microsoft and Intel, struggling to remain current.

Simply put, Microsoft's Windows has very low penetration on mobile devices. Meanwhile, Intel has been too slow to develop chips for the new ultra-mobile world, and the second half of 2013 is going to be an important period in its long-term plans. Within those six months, Intel is releasing a few new chips with which it is trying to establish a foothold in the ultra-mobile market.

All of this forms the basis for discussion of the challenges facing Citrix in 2013. If PCs are no longer the dominant force in computing, and Windows is no longer the default standard operating system, where does this leave Citrix's core desktop virtualization market?

XenMobile to the rescue
Citrix hasn't been slow to adjust to the changing reality. In the first quarter, it released its enterprise mobility solution, XenMobile. Unfortunately, it seems to have affected its growth pattern. Indeed, at the time of its first-quarter results, Citrix argued that the XenMobile release caused customers to delay orders as they assessed which type of solution was optimal. A chart of product revenue growth reveals how choppy the company's growth has been as a consequence.

Growth in products and licenses is the key to growth in the other revenue streams.

The second quarter saw an impressive bounce back in overall product and license sales growth. But within that, mobile and desktop only generated a 2% increase. So, even though mobile and desktop revenue actually rose 11%, Citrix's future growth is not assured.

However, on the conference call, management was keen to stress that: "...regarding mobile and desktop, I believe that the growth will accelerate as we look into Q3 and Q4. And that's a function largely of productivity starting to flatten out and mobile starting to ramp."

Desktop virtualization and application delivery controllers
Alongside the plan to push XenMobile -- which, by the company's own admission, is hurting its efforts to sell its stand-alone desktop solutions -- Citrix is also releasing its latest desktop virtualization solution, XenDesktop 7. Microsoft has a vested interest in helping this solution succeed because it brings Windows virtual desktop and apps under one structure, encouraging corporations to keep running Windows.

While XenMobile and the XenDesktop 7 are about generating future growth in mobile and desktop, the current star performer is Citrix's networking and cloud division. The latter grew revenue at a whopping 46% in the quarter, with product license revenues up 54%. In fact, the share of total revenues coming from networking and cloud solutions has risen from 16% in 2010 to around 22% so far this year. 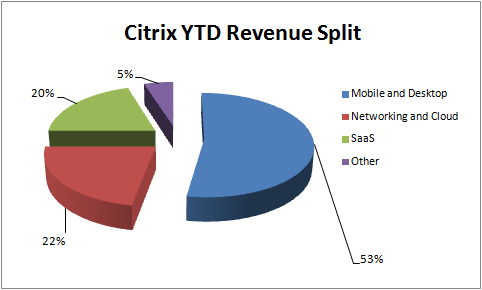 The biggest contributor to growth in networking and cloud revenue came from Citrix's application delivery controller, or ADC, NetScaler. F5 Networks (NASDAQ:FFIV) is the global leader in this market, but Citrix's NetScaler has a couple of key advantages.

First, Citrix is able to include NetScaler as part of its virtualization offerings. Indeed, it announced that it signed 550 desktop virtualization orders in the quarter on this basis. Second, Cisco Systems is a key partner of Citrix, and since Cisco stopped investing in its own ADC (called ACE), the two companies have teamed up to sell NetScalers.

There is more growth to come. On the conference call, management argued that the replacement orders for Cisco's ACE only contributed a "minor amount" to the current results. In other words, Citrix still has a significant amount of Cisco's installed base of ACE customers to target in the future. Naturally, F5 will also fight hard for this business, but it's difficult to conclude that Citrix isn't taking market share at the moment.

Essentially, Citrix investors should be looking for a few things going forward:

The desktop virtualization market is far from dead, and still has some good growth catalysts. In addition, the changing tides in IT spending are about integrating solutions across multi-platforms, so Windows still has a key role to play. Meanwhile, XenMobile and NetScaler promise to offer alternative sources of growth. 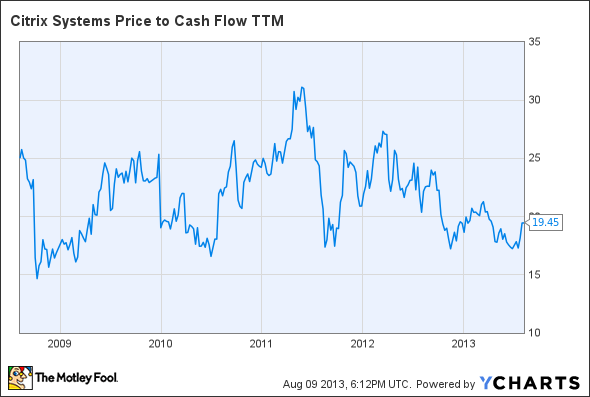 Provided it can execute on the above points, the analysts' consensus price target of $80 looks achievable. It's well worth a look.