When the vast majority of stocks appreciate for several consecutive years, it can be difficult to determine which companies are for real and which companies are simply riding the wave. Chipotle Mexican Grill (NYSE:CMG) clearly fits into one of these categories.

If you had approached someone in the 1980's and told them there would be a healthy and popular Mexican fast-food chain in the future, they would have laughed at you and brushed you off. Your feelings would have been hurt, and you would have quit making prophetic statements. However, if you were patient enough, you would have been proven correct.

Chipotle takes a unique approach to its operation. Of course, some of its produce items are organically grown, and almost all of it is secured locally (within 350 miles). Chipotle also promotes animal welfare and is environmentally friendly. All of this is great, but another major selling point is the atmosphere.

Instead of taking the traditional fast-food restaurant approach for décor, Chipotle used fine-dining restaurants as inspiration. This comfortable and appealing atmosphere makes you feel as though you're eating somewhere nicer than a fast-foot restaurant, yet you're still paying fast-food prices. This has been a key to the company's success. And with demand high, it makes sense for Chipotle to want more.

Chipotle opened 44 restaurants in the second quarter. While this growth isn't as aggressive as last year's second quarter (55 restaurants opened), it's still a positive sign. It also contributes to revenue growth. However, keep in mind that newer restaurants usually have lower margins due to high expenses and growing pains related to operating efficiencies.

Chipotle now has 1,502 restaurants total, with 1,490 of them in the United States. You might look at the high domestic exposure as a negative, but it's actually a positive. Chipotle has barely tapped into the international market (Canada, England, France), which means there is still a ton of international growth opportunity.

Chipotle also has two ShopHouse Southeast Asian Kitchen restaurants, and it plans on opening four more locations by year end. Over the long haul, it's possible that Chipotle becomes similar to a Yum! Brands (NYSE:YUM), which owns market-leading brands Taco Bell, KFC, and Pizza Hut. Chipotle might take a slightly different route in regards to cuisine, and a much different route for food quality.

Overall, Chipotle aims to open 165 to 180 restaurants by year end. This, in turn, should help the top line. In Q2 FY 2013, average restaurant sales were $2.1 million, which was a slight increase over the year-ago quarter.

For the second quarter, all-important comps increased 5.5%, which was impressive, but it wasn't as impressive as the 8% gain seen in the year-ago quarter. Chipotle expects full-year comps to come in between the low-and mid-single digits. It should also be noted that Chipotle aims to grow using its catering service, which was launched in select locations in the first half and should be available at all restaurants by the end of the year.

The only bad news you can find for Chipotle (as a company, not a stock) is food-cost inflation. Management expects this trend to continue throughout the remainder of the year, but it shouldn't play a significant role on the stock price. A more concerning factor exists in that regard.

If you're the type of person who ignores valuation and broader market conditions, then the following information might not concern you. However, this information matters.

High multiples don't matter much when the broader market is stampeding higher, but the market will eventually pull back, and when it does, Chipotle isn't as safe as McDonald's or Yum! Brands. The chart below provides an example. Pay attention to how these stocks performed when the market crashed in 2008. 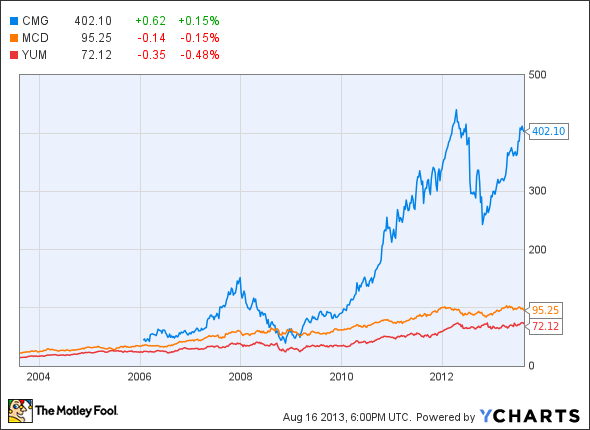 McDonald's and Yum! Brands were clearly safer places to be.

Yum! Brands has 39,000 restaurants in 125 countries, with broad exposure in China and India. With more middle-income consumers in these countries, growth should be stable. On the other hand, the domestic market might not perform as well, as Americans are becoming more health conscious by the day. Yum! Brands should find a way to continue to grow, since it always has in the past. However, if Chipotle manages to steal significant market share from Taco Bell, then it might aim to attack Yum! Brands in other markets as well.

McDonald's might not be growing at the rate of Chipotle, but it's still the strongest brand of the three by a landslide. The company is facing increased competition, but its menu innovation (including healthy options) and marketing power should lead to a defensible market position. McDonald's is also trading at 17 times earnings, representing fair value. McDonald's isn't a serious threat to Chipotle, and vice versa. The big difference between the two companies for investors is whether or not you want to roll the dice (Chipotle) or play it safe (McDonald's).

Chipotle is a top-notch operation. There is no doubt about this whatsoever. And that being the case, the company should reward its shareholders over the long haul. But with the broader market looking frothy and the stock trading at 42 times earnings, this simply doesn't look to be an ideal entry point.