McDonald's (NYSE:MCD) and Coca-Cola (NYSE:KO) have much in common. The two are among the most recognized brands in the world, and, perhaps more than any other American companies, represent the American corporate model abroad for better or for worse. Both companies are revered and reviled, known for making great-tasting products, but also ones that can contribute to health problems such as obesity and diabetes.

Both are also among the biggest publicly traded companies in the world -- Coke is worth near $170 billion while McDonald's is valued at around $95 billion -- and the two are longtime pillars of the Dow Jones Industrial Average, an exclusive club of 30 of the U.S.' most important companies.

The two food and beverage stocks have also been poor performers recently, both losing to the Dow this year. 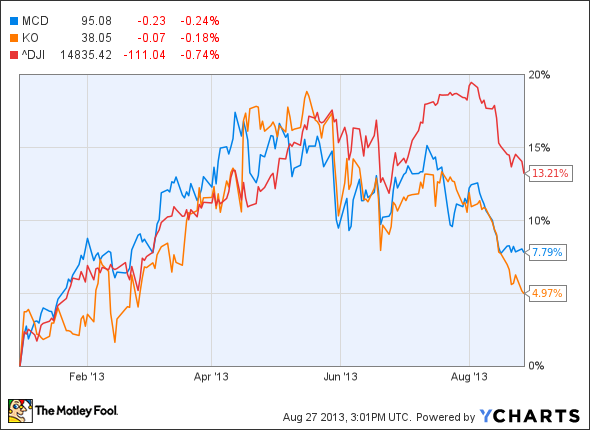 Expanding the range to two years, we find an even greater disparity. 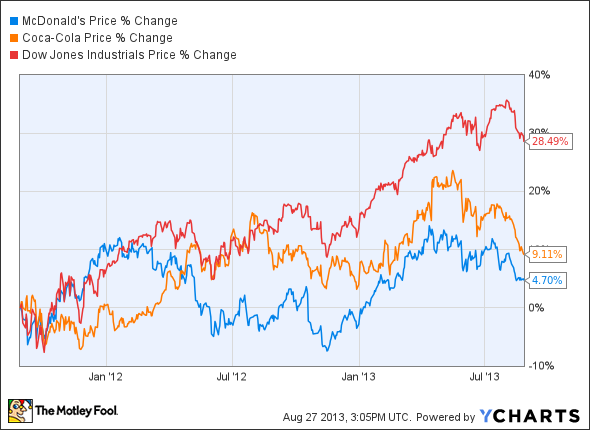 As you can see from the charts, the two stocks have dipped considerably over the past couple of months. What's ailing these consumer-facing giants?

While both companies have similar histories, the two seem to be facing different challenges these days. McDonald's, which seemed to write the fast-food rulebook for so many years, now finds itself in a changing industry as consumer tastes have elevated from the traditional burger and fries. The foodie revolution at home has fueled the fast-casual boom, leading to the growth of chains like Chipotle Mexican Grill and Panera Bread. Meanwhile, Europe, which is McDonald's biggest market, has been mired in recession, adding further to its problems. The fast-food chain has seen global comparable sales improve just 0.1% this year, perhaps indicating a sense of brand fatigue. In the latest earnings release, CEO Don Thompson said the company is facing a "challenging" environment.

Coca-Cola, on the other hand, saw 1% volume growth in its most recent quarter, and 3% volume growth year to date, better than McDonald's numbers but below Coke's expectations. The beverage giant also experienced a 4% decline in North American soda sales in its most recent quarter, and peers PepsiCo and Dr Pepper Snapple saw significant declines as well. Nearly half of Coke's sales come from North America, with sparkling beverages continuing to outpace still drinks; soda sales have been falling in the U.S. since 2004, and the decline has accelerated recently. Coke has found growth opportunities in emerging markets and new beverages to offset that decline, but it seems unlikely that it will be able to turn that trend around at home, especially with crusading politicians such as New York Mayor Michael Bloomberg, who sought to ban sodas above 16 ounces, blaming the beverage makers for the nation's obesity epidemic.

One for the road
Despite the headwinds both of these companies are facing, they still wield tremendous market power and have the profit margins to show it. Even if sales stagnate, per-share profits will continue to grow due to share buybacks, and shareholders will be benefit from ample dividend payouts.

Of the two, though, McDonald's seems to have the greater chance of turning things around over the long term. Coke can make inroads abroad, and it will likely continue to acquire smaller beverage companies and put the force of its enormous distribution network behind them. But Powerade or Odwalla is never going to have the draw of Coca-Cola's namesake brand, and, outside of advertising, the company seems to have little power to change the domestic backlash against soda. Recent studies have shown obesity declining in preschoolers, a development some credit to lower consumption of sugary drinks. If that's the direction the country is headed in, Coke will continue to lose sales.

McDonald's, on the other hand, will always sell burgers, fries, and Coke products, but the company has more flexibility than its beverage-making twin. The fast-food chain consistently updates its menu to keep up with industry trends, such as adding its McCafe line to compete with Starbucks or providing healthier options like salads and McWraps to offer consumers healthier choices. Recently, McDonald's has been revamping its U.S. stores, adding TVs, Wi-Fi, and a more modern, minimalist design similar to its fast-casual cousins, giving consumers another reason to visit.

After their recent woes, I'm not sure I'd bet on either of these traditional powerhouses to beat the market, but due to its ability to change its menu items and store design, McDonald's should have a greater chance of success than Coke.