Shares of Accuray (NASDAQ:ARAY) rallied more than 9% on Wednesday after the maker of robot-assisted radiosurgery devices reported a narrower-than-expected fourth-quarter loss. What fueled this big jump in the stock, which has already risen more than 50% over the past six months, and was this bullish optimism deserved?

Wiping out tumors with lasers in real time
Accuray's flagship product is the CyberKnife Stereotactic Radiosurgery System, a robotically guided laser knife that maneuvers around healthy tissues to deliver precise doses of radiation against cancerous tumors. 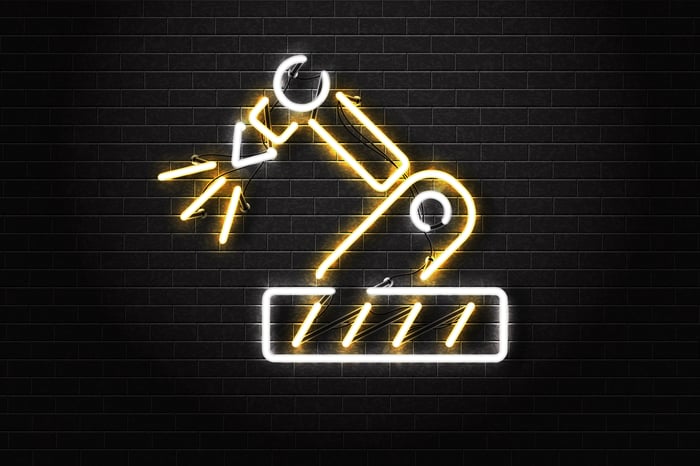 The system uses real-time X-ray images, rather than pre-treatment ones, to pinpoint the exact location of a tumor. Since CyberKnife can accurately kill cancer cells while sparing healthy ones, it is considered a cutting-edge alternative to traditional chemotherapy, which wipes out infected cells and healthy ones.

In addition to CyberKnife, Accuray produces the TomoTherapy System, which delivers radiotherapy "slice-by-slice" to minimize damage to healthy cells, instead of irradiating the entire tumor at one time. Both CyberKnife and TomoTherapy use medical imaging technology from Morphormics, which Accuray acquired last year for $5.7 million.

A few fourth-quarter improvements
Despite the game-changing potential of CyberKnife and TomoTherapy, Accuray is still unprofitable. For its fourth quarter, the company reported a net loss of $0.25 per share, a slight improvement from the loss of $0.28 it reported in the prior-year quarter. Its adjusted net loss came in at $0.20 per share, topping analyst expectations by a penny.

Adjusted revenue declined 45.6% year-on-year to $84.9 million, matching the consensus estimate. Revenue from products declined 36.6% due to manufacturing and supply-related issues. However, the company's backlog climbed 12% year-on-year to $317.4 million, indicating healthy demand that should boost product revenue once supply chain issues are resolved.

Revenues from services, however, climbed 16.6% to $46.3 million, thanks to positive gains from its TomoTherapy business. During the quarter, Accuray installed 14 CyberKnife systems and 15 TomoTherapy systems, increasing its total installed units to 700.

The speculative world of expensive robotics
Accuray should be compared to Intuitive Surgical (NASDAQ:ISRG), the maker of the da Vinci Surgical System, since both companies are banking on medical practices making hefty purchases to offer premium services to their patients. The CyberKnife System costs roughly $3.1 million, and the da Vinci Surgical System costs $1.45 million. Both pricey products require continual maintenance, which means that each installed unit generates a steady annual revenue stream of hundreds of thousands of dollars.

Intuitive Surgical's da Vinci system allows a surgeon at a console to perform tiny, complex operations via robotic arms. It can be used for prostatectomies, gynecologic procedures, and even cardiac valve repair. Although the da Vinci was hailed as a major success after being used on approximately 400,000 surgeries in America in 2012, it stumbled in May after the FDA launched a launched a probe into 500 adverse events since January 2012, including five potentially related deaths. Shares of Intuitive Surgical have fallen more than 20% since the probe started.

For Accuray shareholders, the rise and fall of Intuitive Surgical should serve as a cautionary tale on just how quickly businesses built on expensive medical technologies can fall out of favor.

The race to eliminate chemotherapy
Accuray's direct competition is coming from other companies that are also striving to render chemotherapy obsolete. Seattle Genetics (NASDAQ:SGEN) and Roche (OTC:RHHBY), the makers of the only two FDA-approved antibody drug conjugates on the market today, top that list.

ADCs are man-made antibodies, carrying cytotoxic payloads, which are trained to seek out certain cancer cells. When a cancer cell is located, the ADC links to the cancer cell, deploys the toxins, and kills it without harming nearby healthy cells. In other words, these "smart bomb" ADCs could match CyberKnife's effectiveness without the need for an operation.

However, that day is still in the distant future, as the current capabilities of ADCs pale in comparison to the wide variety of procedures that Accuray's CyberKnife can be used for. The scope for approved ADCs is also very limited -- Seattle Genetics' Adcetris and Roche's Kadcyla are only used to respectively treat lymphoma and breast cancer.

A Foolish final thought
Accuray is sitting on some very promising technology, but the stock is still a speculative bet. The company is still far from profitable, and its steep top line decline last quarter, while expected, was disappointing.

If Accuray can rectify its supply and manufacturing issues to meet demand, its business could stabilize next year. The company also recently showcased its technology in China for the first time, which could open up new avenues of growth in the world's second largest economy -- which could make this stock a promising bet for investors who can stomach the near-term volatility.