Earlier this week, Bloomberg inadvertently revived hope that Apple (NASDAQ:AAPL) would unveil new iPads at its rumored Sept. 10 iPhone launch event. This new rumor was quickly shot down by The Loop and other relatively reliable sources. Instead, most Apple-watchers now believe that the next-generation full-size iPad and iPad mini will be introduced at a launch event in October before going on sale in late October or early November . 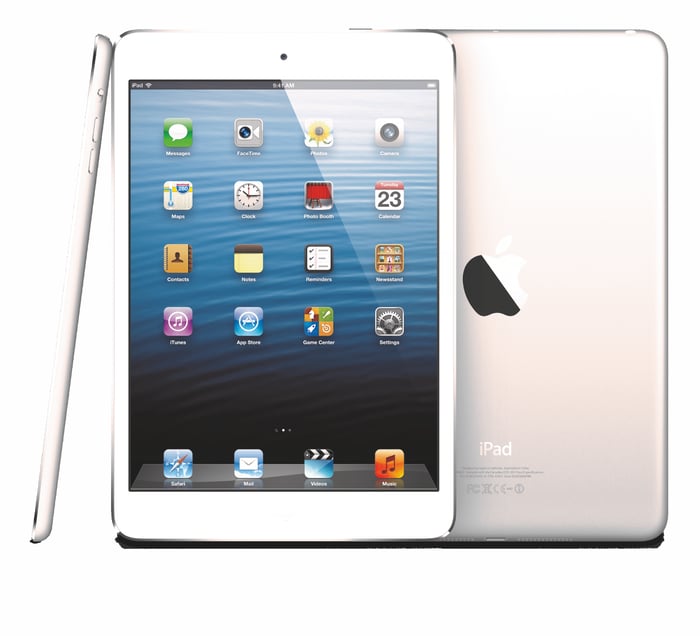 If this timeline is accurate, it would mean that Apple is essentially replicating last fall's product release timetable. This doesn't seem like a very good strategy on Apple's part. A late October or early November release won't give Apple enough time to build up sufficient inventory for the holiday season.

As a result, iPads are likely to be supply-constrained through the 2013 holiday season. That means lost sales, as people who need to buy a present in time for Christmas but have trouble obtaining an iPad may opt to buy a rival tablet instead, such as Google's (NASDAQ:GOOGL) Nexus 7.

Disappointing FY13 iPad performance
Last year's fall release of the iPad Mini and a refreshed full-size iPad spearheaded strong sales growth for the iPad product line. Apple sold 22.9 million iPads in Q1 of FY13, up 48% from the prior-year quarter, even though there was an extra week in Q1 of FY12. The average selling price declined because of the iPad Mini's lower price point, but total iPad revenue still increased 22% year over year.

iPad sales would have been even higher but for supply constraints that prevented Apple from meeting the market's full demand. Indeed, during a visit to Best Buy (NYSE:BBY) in early January, I witnessed a salesperson explaining to a distraught customer that the company had no iPad Mini inventory in the entire New York metro area.

Pent-up iPad Mini demand therefore carried over into the March quarter, when Apple managed to post an even stronger 65% increase in total iPad unit shipments. iPad revenue was up roughly 40% year over year. However, by the end of March, an appropriate supply demand balance had been reached. As a result, in Q3, Apple posted the first ever year-over-year decline in iPad shipments. iPad revenue fell 27% on a 14% decrease in unit shipments.

In total, Apple's iPad revenue has grown by a paltry 8% year over year through the first three quarters of FY13 (around 11% after adjusting for the extra week in FY12). With no new iPad expected until October or later, I expect this revenue growth figure to end up close to zero by the time Apple closes the books on FY13. Moreover, in light of the iPad mini's relatively low gross margin, the iPad product line can reasonably be pegged as the main cause of Apple's profit decline this year.

Bad timing
It's safe to say that the iPad Mini hasn't lived up to expectations. This product was supposed to destroy the Android tablet market by narrowing the price gap between the iPad and popular competitors like the Nexus 7. Instead, Android tablet vendors have gained ground on Apple in the past year.

In light of the iPad Mini's strong initial sales and long period of supply constraints, it doesn't seem that Apple's problem was product quality or pricing. Instead, Apple's biggest problem was bad timing. When the iPad Mini went on sale in early November, Apple ran through its initial supply meeting the demand from hardcore fans and early adopters. That situation made it impossible to build up enough inventory to meet strong holiday season demand. By the time iPad Mini supply reached a normal level, seasonality was working against Apple, leading to a sharp drop-off in sales.

If Apple follows the same iPad release schedule this fall, it will encounter some of the same problems. It's very unlikely that the company will be able to build up inventory of the new iPads fast enough to meet seasonally strong demand. Some of that demand may remain "pent-up" and translate to strong March-quarter sales. However, by then, plenty of potential customers could bail out and purchase an Android tablet (or a totally different gift) instead.

Foolish bottom line
For the most part, I think tech analysts pay too much attention to timing issues. When a new product release doesn't quite line up with the previous launch cycle, it can have a dramatic impact on quarterly earnings. However, from a longer-term perspective, it usually has no impact on the company's earnings stream.

In this case, though, timing could be crucial. Apple's supply constraints last fall opened the door for Android tablet vendors to gain share. Looking forward to this fall, the earlier the iPad hits the market, the better off Apple will be. Even if a September launch is out of the question, an early or mid-October on-sale date would give Apple more time to fulfill initial demand and build up holiday inventory. If iPad supply constraints once again hamper Apple this fall, Android will move another step closer to dominating the tablet market share battle.