Let's see what the numbers say about Micron (MU).

Investors love stocks that consistently beat the Street without getting ahead of their fundamentals and risking a meltdown. The best stocks offer sustainable market-beating gains, with robust and improving financial metrics that support strong price growth. Does Micron Technology (MU -3.69%) fit the bill? Let's take a look at what its recent results tell us about its potential for future gains.

What we're looking for
The graphs you're about to see tell Micron's story, and we'll be grading the quality of that story in several ways:

What the numbers tell you
Now, let's take a look at Micron's key statistics: 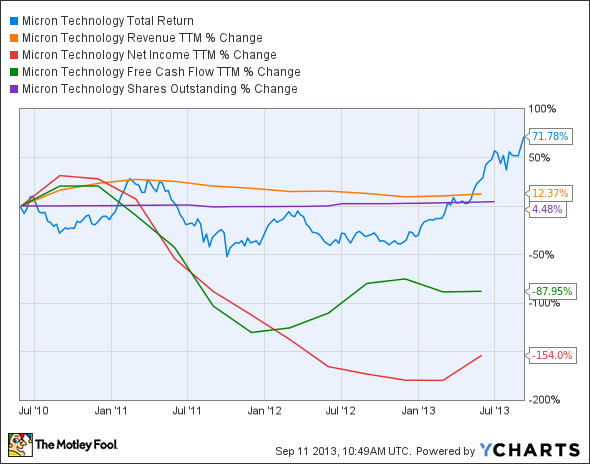 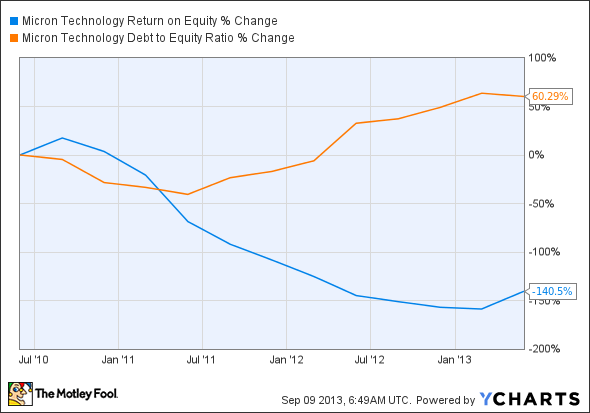 How we got here and where we're going
Things don't look quite so favorable for Micron today. The memory-chip manufacturer musters only one out of seven possible passing grades, and even that single pass was more a technicality than a real improvement. High operational costs, and tepid revenue growth since 2010, have shriveled Micron's net margins, which fell into negative territory some quarters ago. Despite this apparent weakness, Micron's shares have marked a solid comeback over the past three years, in stark contrast to the story its fundamentals can tell. Can this growth be sustainable, or will Micron's weaknesses catch up to it in the end? Let's dig a little deeper to find out.

My fellow Fool Adrian Campos notes that a sharp transition from DRAM to NAND flash memories, along with an extensive price war, has impeded the progress of most dedicated memory-chip makers. According to IC insights, the NAND chip market is now worth $30 billion, although DRAM is still crucial to the PC market. However, weakening PC demand, and slowing smartphone sales, could cripple Micron's long-term revenue and net income growth prospects.

Micron recently completed the acquisition of Japanese memory-maker Elpida, for a "bargain-basement" purchase price of $2.5 billion, which will enable Micron to expand its manufacturing and sales presence in international markets. There's a reason why the price was so cheap: Elpida filed for bankruptcy in 2012 after the price of DDR3 2-gigabit DRAM declined by almost 85%. Micron also announced plans to scut more than 1,000 jobs in an attempt to reduce its operational expenses. My Foolish colleague Selena Maranjian notes that the acquisition of Elpida might provide some lucrative opportunities to expand its memory-chip supply relationship with Apple (AAPL -0.14%).

Hedge fund Bridgewater Associates also increased its stake in Micron after the Elpida acquisition, on the expectation of renewed strength in memory-chip prices. However, high-debt levels, fierce competition, and the industry's normal cyclicality may present a threat to Micron's long-term growth prospects. Samsung is already blowing major headwinds in Micron's direction in the smartphone arena, as its longtime frenemy Apple continues to purchase logic processors and memory chips worth more than $10 billion from the South Korean giant each year.

Putting the pieces together
Today, Micron has few of the qualities that make up a great stock; but no stock is truly perfect. Digging deeper can help you uncover the answers you need to make a great buy -- or to stay away from a stock that's going nowhere.

Fool contributor Alex Planes has no position in any stocks mentioned. The Motley Fool recommends Apple. The Motley Fool owns shares of Apple. Try any of our Foolish newsletter services free for 30 days. We Fools may not all hold the same opinions, but we all believe that considering a diverse range of insights makes us better investors. The Motley Fool has a disclosure policy.