Investors love stocks that consistently beat the Street without getting ahead of their fundamentals and risking a meltdown. The best stocks offer sustainable market-beating gains, with robust and improving financial metrics that support strong price growth. Does EZChip Semiconductor (NASDAQ: EZCH) fit the bill? Let's take a look at what its recent results tell us about its potential for future gains.

What we're looking for
The graphs you're about to see tell EZChip's story, and we'll be grading the quality of that story in several ways:

What the numbers tell you
Now, let's take a look at EZChip's key statistics: 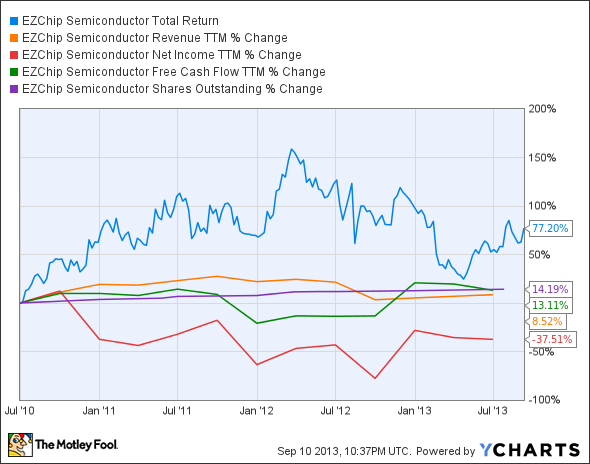 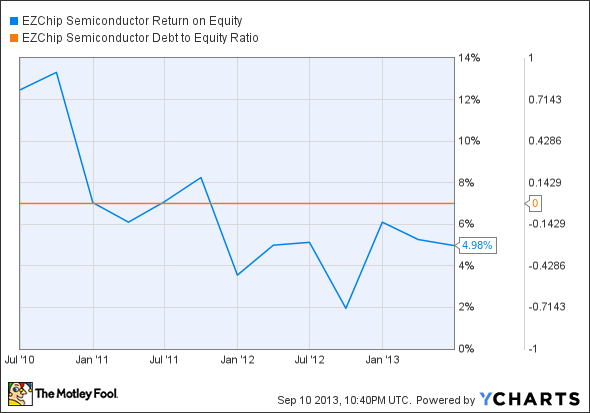 How we got here and where we're going
Things don't look quite so favorable for EZChip today, as it's earned only two out of seven possible passing grades. EZChip's tepid revenue growth and falling profit margins have contributed to most of the failing grades on this test. Despite these evident weaknesses, EZChip's shareholders have enjoyed solid growth over the past three years. Are these gains sustainable, or will EZChip's fundamental weaknesses catch up to it in the end? Let's dig a little deeper to find out.

One recent event could do much to bring EZChip's shares back to a level commensurate with its fundamentals: After Cisco (NASDAQ:CSCO) announced its own network application specific integrated circuit called "nPower," which will directly compete with EZchip's networking solutions, the market pummeled EZChip into submission, and its shares lost 22% of their value. Cisco's integrated network processor could easily muscle EZChip out of a core market, as the networking giant has been a reliable customer for some time. According to Bloomberg, Cisco should represent 40% of EZChip's total revenue for fiscal year 2013. Cisco recently reported that sales of its ASR9000 series edge routers, which use EZChip's NP-3 and NP-4 network processors, have been increased 69% year over year.

Cisco has previously developed its own internal processor called "QuantumFlow," which could provide a rough roadmap to EZChip's future -- this processor hasn't been utilized alongside the products provided by EZChip. However, EZChip has been making significant improvements in its chip designs, which should be be capable of handling higher levels of throughput than first-gen nPower processors. It will also serve different layers than the nPower, according to Feltl analyst Jeffrey Schreiner.

However, Cisco isn't the only major networking equipment providers to fabricate its own chips. Companie such as Huawei Technologies and Alcatel Lucent (NYSE: ALU) have switched to in-house production of network processors. According to Eli Research, Huawei is planning to offer a low-end networking processor compared to EZChip's NP-4 NPU, which may seize some of EZChip's market share. Alcatel has already been competing with EZChip for years, as the two companies each rolled out high-end network processors two years ago. If Cisco makes the switch, EZChip will have few remaining customers. Juniper Networks was the earliest in the group of powerful networking hardware companies that are now producing in-house chips, as it began the shift back in 2009. These four are the ruling body of the routers-and-switches market -- Cisco alone comprises roughly 40% of that segment by revenue, and Alcatel, Huawei, and Juniper add up to over 40% more, leaving roughly 20% for EZChip -- at best. That's not much of a market to grow in.

Putting the pieces together
Today, EZChip has few of the qualities that make up a great stock, but no stock is truly perfect. Digging deeper can help you uncover the answers you need to make a great buy -- or to stay away from a stock that's going nowhere.