Slowly but surely, unemployment levels are falling. Is that really a good thing for investors, or more of a curse in disguise? 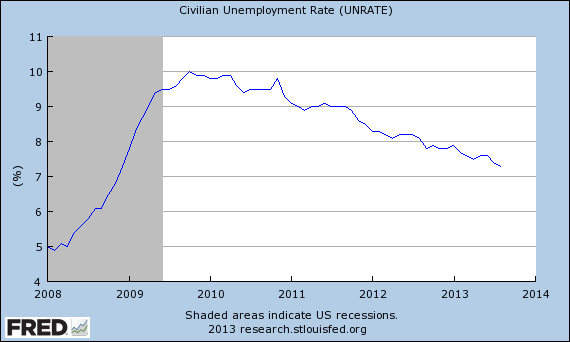 That's a nice, comforting chart, but what does it really mean? How low can you expect the jobless rate to drop? For that matter, how low do you really want it to go?

In a historical perspective, 7% is still a fairly high level of unemployment. It's higher than the peak jobless rate of previous recessions like the 2001 dot-com bust or the early 1970s oil crisis. This metric varied between 4% and 8% from the mid-1980s up until the 2008 panic.

So it's fair to say there's plenty of work to be done. While 7% is better than 10%, it's hardly an ideal situation. Lower numbers are almost always better for the markets, as the jobless rate tends to mirror the Dow (^DJI -0.48%) in an almost eerie fashion. 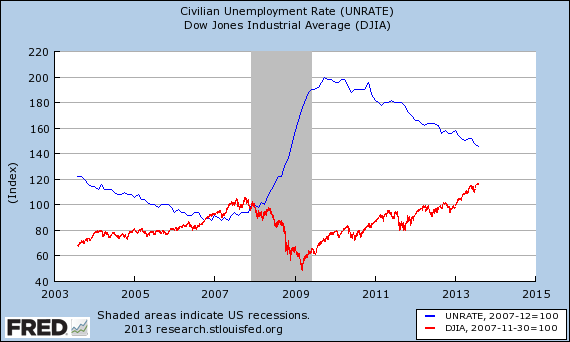 That being said, there are some market forces that might prefer unemployment rates to stay high -- at least just a little bit longer.

You see, the metric ties into the Federal Reserve's QE3 tapering strategy. Chairman Ben Bernanke has said that he'd like to see unemployment dropping to 6.5% before taking his foot off the stimulus pedal. And we all know what happens when Bernanke talks about tapering: Market makers hate the very idea.

Tapering is on the minds of investors worldwide right now, as the Fed revealed today that it plans to keep its $85 billion-per-month asset purchases unchanged for now, surprising analysts who had expected the central bank to initiate tapering by reducing QE by about $10 billion per month. If Bernanke had reported confidence in the falling unemployment rates, the Dow at large may have taken a hit. Major banks Bank of America (BAC -0.74%) and JPMorgan Chase (JPM -0.89%) would have absorbed most of the immediate hit because they're at the receiving end of the QE strategy's largesse. The end of the stimulus program will hurt the banks' short-term profitability, which often takes top billing over longer-term good news.

But don't cry for the banks or the market when that happens. The end of the stimulus program will actually herald a fundamentally stronger economy, with sustainably low unemployment figures at its core. That's great news for patient investors who can ignore shortsighted, knee-jerk reactions and focus on the healthy long-term trends under the surface. Rational and patient investors most certainly want jobless numbers to shrivel away as quickly as possible.

Keep your dry powder handy, folks. The end of QE3 could open a fantastic investing window.

Fool contributor Anders Bylund holds no position in any company mentioned. Check out Anders' bio and holdings or follow him on Twitter and Google+.

Motley Fool newsletter services have recommended buying shares of Bank of America. The Motley Fool has a disclosure policy. We Fools may not all hold the same opinions, but we all believe that considering a diverse range of insights makes us better investors. Try any of our Foolish newsletter services free for 30 days.