While this is usually uncomfortable for anyone to admit the biggest weakness about themselves, it is a completely different story when analyzing stocks. In fact, identifying the greatest weakness of a mature large-cap company can be the catalyst to pull the buy trigger.

One of the most dreaded questions during job interviews is when an applicant is asked about their greatest weakness. While this is usually uncomfortable for anyone to answer about themselves, it is a completely different story when analyzing stocks.

In fact, identifying the greatest weakness of a mature large-cap company can be the catalyst to pull the buy trigger. This is because when you can pinpoint where an established company can improve, it's logical that you can predict its stock price will move higher once its current weaknesses are addressed.

Chinese Fried Chicken or Kentucky Fried Chicken?
China has a taste preference for fried chicken over pizza or tacos, and it shows in the company strategy at Yum! Brands (YUM 0.38%); there is a one-to-four ratio of Pizza Hut to KFC locations in the country. The global fried chicken, pizza, and taco powerhouse has seen 11 straight years of 13% or greater growth. Last year, the company opened a record 1,976 restaurants outside of the U.S., with many of the new locations going into China.

Today more than half of Yum! Brands' operating profit comes from in China. As a result, it shouldn't be a surprise that recent struggles in China that started late in 2012 have caused the stock price to fluctuate.

Weakness in China today is actually an opportunity to buy long. The China division is one of four under Yum! Brands' business structure. Second-quarter earnings showed that while operating profit dropped 63% in China, sales in both the Yum Restaurants International (YRI) (which includes Asia, Latin America, and Middle East) and India divisions rose 6% and 24%, respectively.

However, Yum! Brands continued to see bad luck in China for July and August with sales falling 13% and 10%, respectively. In addition to antibiotic issues in the KFC chicken, historic heat waves caused the Chinese to turn toward cooler alternatives like cold drinks and ice cream.

Many positives still lie ahead for Yum! Brands. First, Pizza Hut's same-store sales grew 7% last quarter in China.  This may provide incentive for Yum! Brands to build more Pizza Hut locations to capitalize on these trends.  Doing so would also help fix the imbalance of the one-to-four Pizza Hut to KFC restaurant ratio within the country. Secondly, international growth overall is still thriving and nothing has changed domestically. Lastly, even if the best the company can do is halt the decline in sales in China, the bottom line (and shareholders) should be greatly rewarded for their patience.

America's IT companies not connecting in China?
Cisco Systems (CSCO 1.55%) has been losing market share to local Chinese competitors in recent years. This is despite the fact that the market in China for switches and routers has surged 20% to $2.6 billion in 2012 from 2010. In this time frame, Cisco's market share has dropped from 21% to 18%. Could this be the beginning of a trend that shadows what happened to Google in China the past several years? Censorship, state-controlled media, and competition resulted in the search engine dropping down to fifth place with just 3% of the market share in China.

Financially, Cisco has continued to grow net sales to its goal of crossing $50 billion annually. For FY 2013, net sales came close to that mark at $48.6 billion as net income rose 24.2% to $10 billion. From a geographic perspective, Cisco experienced product sale increases of 3% in Australia, 34% in India, and 10% in South Korea. China and Japan offset the growth with declines of 5% and 7%, respectively. However, the APJC (Asia Pacific, Japan, and China) business segment still grew by 3% overall for FY 2013.

Shareholders should pay attention to Cisco's relationship with China, but take it with a grain of salt. The company still has many opportunities in the surrounding parts of Asia to expand over the next several years.

Also keep in mind that censorship and bad press go both ways, as President Obama has also banned federal agencies in the US from buying IT systems from the Chinese. If some type of truce can be made between both countries, Cisco may possibly be able to gain market share again in China. Even if the trends continue, though, Cisco will be still be well off as it continues to grow domestically and abroad.

Just do it in China
Nike (NKE 1.73%) has struggled with sales in China, Western Europe, and Japan in recent years. This is despite predictions just a few years ago that sales in China would double to $4 billion in four years. The FY 2013 earnings paint the picture of everything going right and wrong for the global athletic company.

Revenue rose 8% to $25.3 billion with fourth quarter revenue hitting $6.7 billion. The only flaw in Nike's game is that growth was seen across each product type in every geographic location except Western Europe and Greater China.

Some of the specific reasons for Nike's decline in China are losing customers to competitors like Adidas, rising labor costs in Asian countries, and tailored fitted clothing preferences by the Chinese.

Recent announcements of placing Nike in the Dow Jones Industrial Average may help push the stock price higher even without improvements in China. Many investors and mutual funds target Dow companies for their established nature and relatively stable stock prices.

Additionally, despite competition from Adidas, Nike has established itself as a top- tier brand name within soccer -- the world's most popular sport. 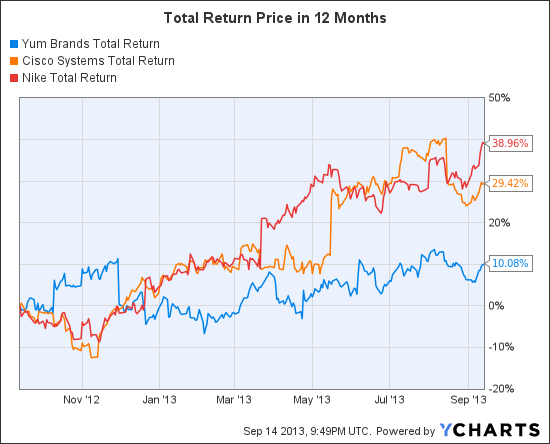 China proving grounds
All three companies are top-tier brands within their industries and all have enterprise values that exceed $30 billion. When it comes to mature companies, their stocks are usually unattractive to growth investors. Current weakness in China for all three brands could highlight a golden opportunity to get into one of these stocks before the problems are solved.

At the very worse, none of the companies figure out China but continue to grow elsewhere. At the very best, positive news in China could signal significant price movement upward and patient investors will be rewarded.

Michael Carter has no position in any stocks mentioned. The Motley Fool recommends Cisco Systems and Nike. The Motley Fool owns shares of Nike. Try any of our Foolish newsletter services free for 30 days. We Fools may not all hold the same opinions, but we all believe that considering a diverse range of insights makes us better investors. The Motley Fool has a disclosure policy.