Kroger (KR 0.85%) is among the largest grocery retailers in the US, and the company came up with strong quarterly results last week. This is a welcome change in the retail sector, which was in a nervous state after Wal-Mart posted lackluster quarterly results followed by a series of discouraging results from the apparel-retail industry.

Kroger has outperformed rivals in recent years by slashing prices. Despite stiff competition, the company has managed to increase its market share in nine out of 17 markets. Kroger's concept of adding more general merchandise in new categories to attract customers seems to be working in its favor.

Kroger operates stores in several channels. It has been expanding its operations with its marketplace format, which are supermarkets bordering on hypermarkets. This format has worked well for the company, as evident from the second-quarter results that it posted last week.

Earnings increased 17.6% from the same quarter a year ago to $0.60 per share. Revenue increased 4.6% to $22.7 billion. The market reacted positively to the results, and shares jumped 3%.

Looking ahead
The global organic-food market is expected to grow at an estimated compound annual growth rate of 12.9%, and is expected to be worth $104.7 billion in 2015. The North American organic-food market is estimated to grow at a CAGR of 12% from 2010 to 2015. Kroger has also joined the organic- and natural-food bandwagon, and has sections of its stores dedicated to this category.

Moreover, jobless claims falling to a seven-year low augurs well for grocers and discount retailers, as more employed people means higher spending on grocery items. Kroger has maintained its full-year EPS guidance range of $2.73-$2.80. The company plans to achieve a long-term EPS growth rate in the range of 8% to 11%.

Same-store sales, an important metric for retailers, measures sales in stores open at least one year. Kroger raised its full-year same-store sales growth projection to 3%-3.5%, excluding fuel, from the prior outlook of 2.5%-3.5%

To prepare against stiff competition from Wal-Mart and Amazon.com in grocery home-delivery services, Kroger has been spending capital on reorganizing its digital-marketing efforts. It went on a hiring spree for this section and recruited talent from other big retailers.

Doing better than others
Grocers like Safeway (NYSE: SWY) and Supervalu (SVU) have been disposing parts of their operations in order to improve efficiency and profits. Kroger, on the other hand, has been in acquisition mode.

For example, Supervalu recently sold close to 900 assets as a part of a restructuring exercise for a value of $3.3 billion. This resulted in a leaner company with a lower cost structure and a simplified business model. After this divestment, the company is on a comeback.

In the first quarter of fiscal 2014, it trumped earnings estimates by $0.04 per share. But the stock has already run up over 200% year-to-date, so investors should look for more signs of a turnaround before buying into the momentum. 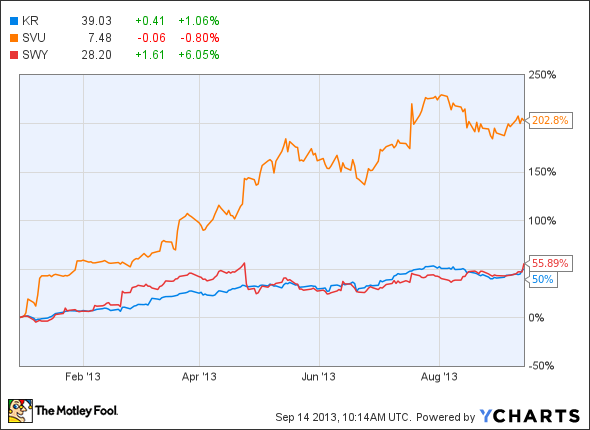 Even Safeway sold off a part of its business under a restructuring initiative. In a deal worth $5.7 billion, it sold off its profitable Canadian business to Sobeys, Empire's Canadian food retailer. It is expanding in the U.S. through an apartments-over-stores format at new locations. The new Safeway store in Wheaton, with 486 apartments on top, is slated to be completed in October. This format should lead to better revenue, as residents would probably visit the Safeway store because of its convenient location.

The new Petworth store, with 220 apartments, is expected to open next summer. In the second quarter, the company managed to post $8.7 billion in revenue, which fell short of consensus estimates of $10.3 billion.

On the other hand, in July, Kroger announced the acquisition of Harris Teeter Supermarkets in a deal worth $2.4 billion. This will expand its reach in the Southeast and Mid-Atlantic U.S. markets. There are, however, a series of lawsuits being filed to block the acquisition, so technically this isn't a done deal yet. This transaction is expected to go through by the end of this year, however.

Conclusion
Kroger's business is progressing well and the company has also increased its same-store sale growth expectations. Moreover, with a beta of just 0.7, Kroger is a defensive pick and also pays a decent dividend that yields 1.6%. So, there are a few good reasons why Kroger is a stock that might find a place in your portfolio.

ANUP SINGH has no position in any stocks mentioned. The Motley Fool owns shares of Supervalu. Try any of our Foolish newsletter services free for 30 days. We Fools may not all hold the same opinions, but we all believe that considering a diverse range of insights makes us better investors. The Motley Fool has a disclosure policy.

Why BRC Stock Is Perking Up This Morning