Owning a supermarket or a department store is a good idea. Whatever be the economic condition, people will always need daily use items such as food and other utility products. Hence, the importance of supermarket chains cannot be denied. A typical example here is Kroger (NYSE:KR), which has been a remarkable performer and has managed to do well even during times of crisis.

Kroger proved its worth once again when it recently posted its second-quarter results. Driven by customers' frequent visits and an increase in items sold, revenue grew 4.6% to $22.7 billion. Also, it witnessed a 4% increase in its same-store sales, a key metric that ignores the effect of store openings and closures during the period.

However, not all grocers have been able to perform well. For example, Supervalu (NYSE:SVU) is one of those retailers whose performance has not been up to the mark. A quick look at the stock price movement of Kroger against its rivals Supervalu and Safeway (NYSE: SWY) shows how Kroger has outperformed over the last few years. 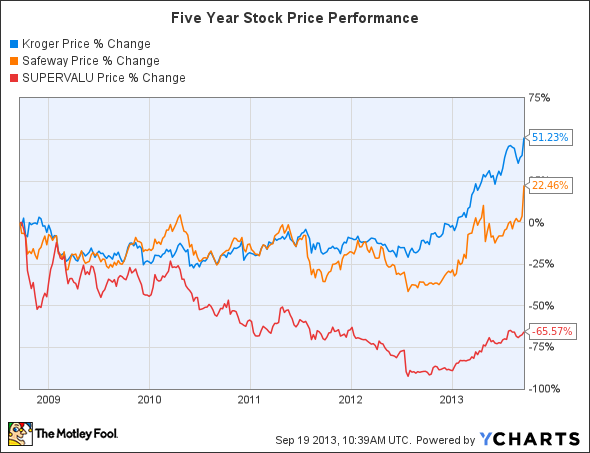 Kroger has provided the highest return of 51.2% to its investors in the last five years. Despite difficulties, such as customers being extremely conscious about each penny spent, rising costs, and shrinking margins, the Cincinnati-based retailer continues to shine. Its revenue grew as it strengthened its customer-focused strategy in the following ways.

Moreover, Kroger attracted customers by having a well-designed customer loyalty program in place, which provides customized discounts to its loyal customers looking at the purchase history.

Kroger also reduced the waiting time at the checkout lines in order to make it more convenient for customers to shop. The retailer made good use of the prevailing trends of increasing demand for food made of natural ingredients and started selling them. With the growing importance of organic food, Kroger started offering organic and natural food at lower prices, which lured customers to its stores.

On the other hand, Supervalu and Safeway are finding it difficult to attract customers and have been operating on lower earnings before interest and taxes margins, as shown in the chart below: 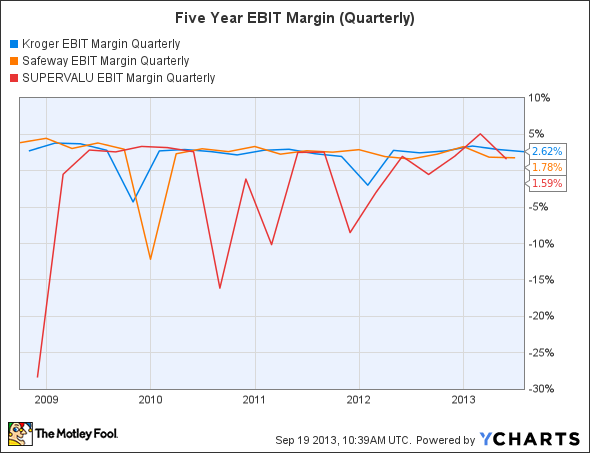 Again, Kroger leads the pack with a 2.6% EBIT margin. Supervalu has the lowest margin and was unable to manage its costs, causing large dips in margins. Safeway is in between the two.

However, these companies have been trying to stage a comeback. Supervalu plans to launch a fresh-meat-cut program, which will help customers get customized services. This might increase store traffic. On the other hand, Safeway has been remodeling its stores and has been largely focusing on natural and organic products. This might help Safeway in attracting more customers and having higher sales.

In addition, Kroger has been trying to add more customers through its website and Kroger app, which has started to bear fruit. Its efforts increased the number of Kroger app users and Kroger.com traffic.

In fact, looking at the PEG ratios of the three players, Kroger is the cheapest option with a ratio of 1.5. Safeway and Supervalu have PEG ratios of 1.9 and 1.8, respectively.

Final thoughts
Kroger looks good from all perspectives. It has been the most consistent performer with greater returns to investors, is operating on a higher EBIT margin, and is cheaper compared to its peers. Moreover, its focus on customer convenience and recent acquisition makes it even more attractive.

Lastly, Kroger has been paying dividends, buying back shares and investing in stores. Hence, I believe this company will be the right pick for your portfolio.