Here are two winners today as the Dow gives up its early gains.

Investors had some positive economic data to chew on this morning when new-home sales were reported, increasing by 7.9% last month from July. The increase was in line with expectations and it showed homebuyers continued to buy even as mortgage rates rose during the summer. In other news, durable-goods orders rose by 0.1% in August, which was better than the forecast decline of 0.6%. Even with the positive news, the Dow Jones Industrial Average (^DJI 0.07%) is slipping after early gains, down 0.23% as of 2:45 p.m. EDT. There were big movers and shakers inside and outside of the Dow today. Here are the details.

Shorts got smoked
One of the biggest headlines today came from beyond the Dow as shares of MAKO Surgical (MAKO.DL) shot up 82% after medical-device specialist Stryker (SYK 0.11%) announced it would acquire MAKO for $30 a share. That's a nice premium from MAKO's previous close of $16.17.

A big chunk of MAKO shares were sold short, leaving some investors feeling burned this morning. However, that's to be expected as MAKO has been a controversial stock and has seen extremely volatile trading over the past five years. 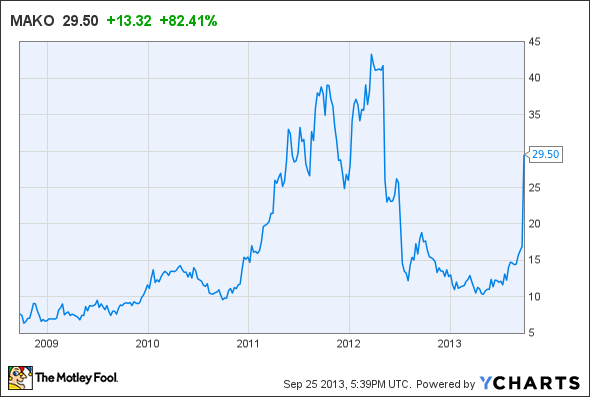 For investors like me who bought shares early this year, after the stock's vicious price plummet, it's a bittersweet day. While the short-term win and quick double-up is very nice, I really saw huge potential in the company as a long-term investment. This became even more evident recently when CEO Maurice Ferre touted the effectiveness of MAKO's new Hip 2.1 application.

Fellow Fool contributor Steve Symington, who covers MAKO often,  echoed my thoughts today. "I think Stryker is making a brilliant move by grabbing MAKO Surgical before the smaller company becomes profitable, but it's a bittersweet day for patient investors who were hoping to realize much more significant gains over the long term."

It's hard to please everyone, but it's even harder when you're a company named JPMorgan Chase (JPM -0.73%). The company is currently the Dow's biggest winner, up 2.11%, after offering to pay roughly $3 billion to settle criminal and civil investigations. The offer shows the bank is hoping to avoid the time and effort needed to fight the charges, while trying to improve its public reputation. The trick is handling that without paying too much, which could irritate shareholders and bring on private litigation. My guess is that most investors will be glad to pay a premium and close this ugly chapter as quickly as possible.

Cisco (CSCO -0.26%)is the Dow's second-biggest winner of the day, up 1.37% after investors marked their calendar for a product unveiling in November. Cisco invested $100 million last April to fund a start-up, Insieme Networks, with the option to buy it outright for another $750 million if its products prove successful, according to Business Insider. The wait for the"game-changing" product from its start-up will be revealed on Nov. 6.

This is a big deal because Cisco is under attack from a technology called software-defined-networking, or SDN. SDN takes high-end features in routers and switches and puts them into software that enables it to be run on cheaper hardware -- giving companies an advantage by buying fewer and cheaper products. Cisco's game-changing product from Insieme Networks is supposed to be the company's response, and investors are anxiously waiting to see the product demonstrated in a few weeks.