Investing in hoteliers has been a profitable venture, but the past means nothing. The best way to determine future potential is to dig into a company's 10-Q or 10-K to find out what is going on. One company investors may want to dig into is Marriott International (NASDAQ:MAR), which has outperformed thanks to one simple chain reaction.

Heightened demand is being seen throughout the industry, which is the primary reason most hotelier stocks have appreciated over the past several years. But it is not all good news.

Recent results
In the second quarter, Marriott reported impressive numbers almost across the board, including (all numbers year over year):

Of course, if you only looked at these numbers, then you might choose to invest without knowing the entire story. This isn't to say that Marriott doesn't represent a quality investment; it simply means that you should know more prior to acting.

According to Marriott, the first half of the year was strong thanks to low supply growth, favorable economic conditions in many international markets, improved pricing, and more properties in the system. On the other hand, the domestic market hasn't been a cause for much celebration.

A tale of two coasts
Marriott is seeing continued growth in the Western United States, which has allowed for increased pricing, but it's a different story in the Eastern United States. The industry is seeing oversupply in New York City, which leads to decreased demand and lower pricing. This negatively impacts the top line. Washington D.C. is even weaker, primarily due to government budget cuts, which has led to decreased government business and less need for hotel rooms in the area.

Prior to government budget cuts, group demand for Marriot was high, and those traveling for government business had access to government funds. Therefore, government employees would spend more money on food and beverages at Marriott hotels. This demand has slowed, which has reduced revenue.

On the positive side, Marriott has seen increased transient demand. This is good news, but these guests don't spend as much on food and beverages.

Guiding lower
It is not always a negative when a company guides lower--it can simply be a case of under-promising in the hopes of over-delivering. That said, it would make little sense to invest in a company that guides lower when peers are guiding higher. For instance, Marriott recently lowered some key metrics:

These aren't drastic changes, but Starwood Hotels & Resorts Worldwide (NYSE: HOT) and Wyndham Worldwide (NYSE: WYN) recently upped their respective 2013 EPS guidance. And while EPS and revenue growth have been mixed for these three companies over the past three years, Marriott isn't the top performer in either area. 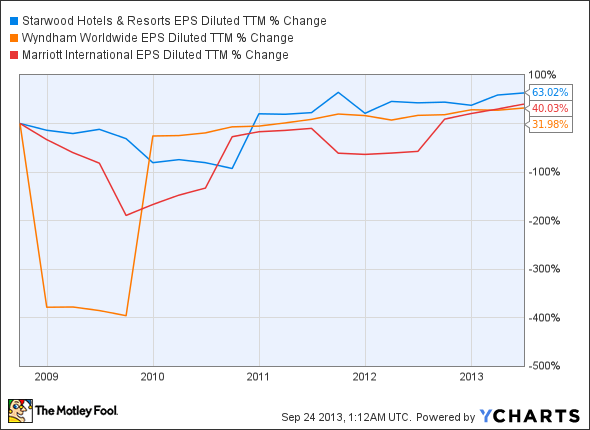 And revenue growth over the past five years: 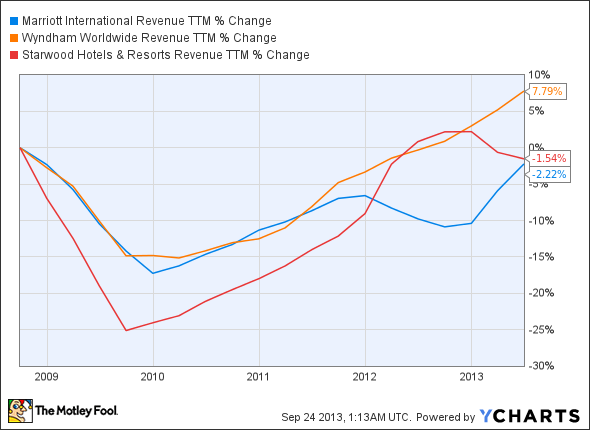 And when it comes to balance sheets, Marriott also lags:

However, Marriot plans on focusing more on franchising properties. Currently, 54% of its hotel rooms are run by franchisees. If Marriott follows through with this goal while cutting under performing company-owned locations (plans on divesting 10,000 rooms in fiscal year 2013), then debt is likely to be reduced, which can act as a catalyst for the stock.

The bottom line
Marriott is one of the most recognized hotel brands in the world. This shouldn't change. And with Marriott focused on lower-cost operations and divesting under performing locations, top and bottom-line growth potential still exists.

On the other hand, the likelihood of continued government cuts, changing guest trends, and reduced guidance are causes for concern. Therefore, Marriott is a risky investment.

Is It Time to Check Out This Investment? @themotleyfool #stocks $MAR Next Article
Current