The world is slowly being filled with gas sipping autos. That’s crimping demand for gasoline. However, the same can’t be said for diesel, where demand is expected to continue to growing over the next few decades.

We're driving less. Not only that, when we do drive, we're likely driving a gas sipper. The combination of high gas prices along with more fuel efficient options has overall demand for gasoline slipping. That's putting pressure on refiners, which are increasingly looking to access cheaper priced crude oil as well as export excess supply to earn a decent profit.

It's only going to get harder for refiners to make decent money on gasoline. Whether it's increased regulations, lower demand or ethanol mandates, the bottom line is that gasoline won't be fueling a lot of profit growth over the coming years. On the flip side demand for diesel fuel is expected to grow, which is why refiners are increasingly tying future growth to that fuel.

Take a look at the following chart from oil giant ExxonMobil (XOM 1.00%). By 2040 transportation fuel is expected to have grown by 40% since the dawn of this century. 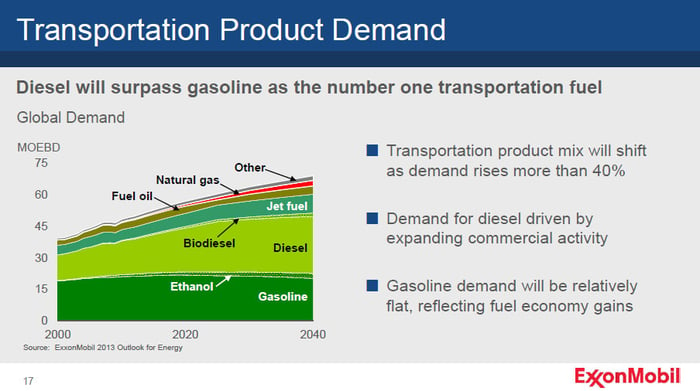 Notice that gasoline demand is expected to remain steady, while diesel demand enjoys the most growth. Expanding commercial activity across the globe will fuel that rise. It's a trend that has refiners investing now to capture that diesel driven growth.

For example, Tesoro (ANDV) invested $35 million to increase the diesel fuel yield at its Mandan facility. It also has invested $275 million at its Salt Lake City facility to improve the yields of both gasoline and diesel. Finally, a big driver of its Carson refinery acquisition was to enhance the gasoline to diesel production flexibility. While not all of its projects were undertaken with diesel in mind, it is clear that the company sees diesel fueling some of its future growth.

Meanwhile, refining peers like Phillips 66 (PSX 1.76%) and Valero (VLO 4.16%) are both investing to grow not just diesel production, but export capacity. Phillips 66 is in the process of boosting its export capacity from 285,000 barrels per day last year to 500,000 over the next three years. The company has already seen its exports grow by 80% year-over-year, with distillates like diesel making up about 80% of current exports.

Valero is also investing with an eye toward diesel. It has invested in hydrocrackers to take advantage of strong demand for distillates like diesel. By 2018 the company expects these investments will improve its distillate yield from 33% to 43%. That's in addition to the company's investment in the Diamond Green Diesel plant. Of the three, Valero is most focused on a diesel fueled future.

Finally, going back to Exxon for a moment, while diesel isn't a needle moving driver for the company, its growing demand is still important for the oil giant. Because gasoline is expected to stagnate, growing demand for diesel will be important because it will act as a headwind to keep oil prices high. That will ensure Exxon earns adequate profits on the money it invests to drill for additional sources of oil.

The bottom line is that as a nation we really are making an impact by driving more fuel efficient cars. It will keep demand for gasoline rather flat over the coming decades, which is a problem for refiners. That's why refiners are turning to diesel to fuel future returns.

Diesel Demand will Fuel Oil Too

Fool contributor Matt DiLallo owns shares of Phillips 66. The Motley Fool has no position in any of the stocks mentioned. Try any of our Foolish newsletter services free for 30 days. We Fools may not all hold the same opinions, but we all believe that considering a diverse range of insights makes us better investors. The Motley Fool has a disclosure policy.