If you're still catching up on AMC's instant classic series "Breaking Bad," you may want to stop reading now. There are spoilers ahead.

Sunday night, just as the final crescendo fell in the clubhouse of a neo-Nazi prison gang, JPMorgan Chase (NYSE:JPM) CEO Jamie Dimon stood with the figurative barrel of an $11 billion fine pressed against his forehead.

From humble beginnings
Like Walter White, Dimon's journey began humbly. Not as a high school chemistry teacher, but as the assistant to a just-fired Sandy Weill. The two set up shop planning a comeback, not unlike the unfortunate partnership between White and his former student, Jesse Pinkman.

Together, Weill and Dimon returned to banking and slowly, acquistion by acquisition, built a relatively small Baltimore-based commercial finance company into what would become the largest financial services company in the world at the time: Citigroup (NYSE:C).

Walt and Jesse, in an oddly analogous series of events, grew their blue-tinted business to the upper echelon of the drug business -- filling a void left by an absent cartel and expanding distribution from the southwest U.S. to Europe. From Crazy Eights to Tuco to Gus Fring to Mike Ehrmantraut, Walt was able to merge and grow his business' market share, geography, and influence.

Every rise to greatness requires a struggle
Just as Walt and Jesse parted ways acrimoniously over Walt's... we'll call it, "management style," Weill and Dimon also split ways on less than ideal terms. In fact, Weill fired Dimon from Citi.

Dimon soon found his footing, taking the helm of Bank One and promptly doubled the value of the bank over the following four years. Walt too rebounded to great success, amassing seven 55-gallon drums of cash.

Throughout his rise to power and wealth, Walt continually destroyed his competitors' and even partners' businesses in the process. From Tuco to Pollos Hermanos, there is an unquestionable pattern of destruction. Not to mention the damage done to his family.

Though not a direct result of Dimon's involvement or his later absence, Citigroup eventually become one of the hardest-hit banks in the world during the financial crisis. Like Bank of America (NYSE:BAC), Citi's growth plans overextended the bank, exposed it to poorly underwritten loans, weakened its capital base, and nearly collapsed the entire enterprise. In many ways, Sandy Weill and former Bank of America CEO Ken Lewis were cut from the same cloth. It was in their moment of weakness that Dimon truly ascended to the pinnacle of banking's elite.

The problem with ego
And yet, as soon as everything was finally coming together, ego got the better of both Walt and Dimon. For Walt, the consequences were a suddenly enlightened DEA agent brother-in-law and a gang of sociopath neo-nazis crashing his empire in one fell swoop. Walt was arrogant, certain that he could control every variable -- human beings and otherwise -- to engineer the outcome he desired.

For JPMorgan and Dimon, there are now countless examples of failures to control all the variables -- human beings and otherwise. There is the London Whale, the laundry list of regulator and Department of Justice investigations, and of course the news last week of an $11 billion settlement.

Dimon out-Heisenberged Heisenberg
But unlike Walter White, who ended the series dead of a gunshot wound, lying on the floor of a meth lab, Jamie Dimon continues to rule the banking landscape.

Earlier this year, JPMorgan stockholders voted resoundingly to keep him on as Chairman; his position at CEO may be the most secure job on Wall Street. The company reported 2012 net income that was 48% higher than in 2006. Total assets increased 64% over the same period.

And if that's not proof enough, just look at the company's stock performance over the past year. It's stellar. 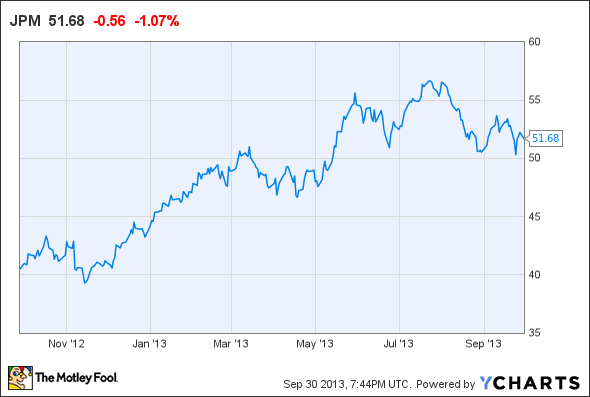 Are you surprised that Chase Credit Cards are tinted blue?
White's business was fully concluded Sunday, culminating in a bloody hail of bullets that left a room full of neo-Nazis dead, Jesse Pinkman free at last, and Walt's formerly All-American family destroyed, its patriarch lying dead in a meth lab of his own design.

For Dimon, the story is far from over. JPMorgan's legal and regulatory woes are far from over, but these are finite problems. I'm confident that when the dust settles, Jamie Dimon will remain on top, the Heisenberg of Wall Street.