For Apple (NASDAQ:AAPL), the pressure is certainly on. Since Steve Jobs passed two years ago, Apple's 30% gain has meaningfully underperformed the S&P 500's 50% rise. Critics have questioned the company's ability to deliver significant innovation since Tim Cook took the helm. The last major new product Apple launched was the iPad in January 2010. Even Apple's board of directors has reportedly been pressuring Tim Cook to innovate.

Well, investors might not have to wait much longer to get their innovation fix from Apple. Set to debut next year, Apple has not one -- but two (or four, depending on how you look at it)  -- entirely new products, according to supply chain research by NPD DisplaySearch.

The product roadmap
Based on NPD's research, 2014 will be packed with major new Apple products, two of which could, or could not, be considered new categories: iPhones with larger displays (to the tune of 4.7 and 5.7 inches -- often referred to as phablets) and a larger iPad with a 12.9-inch display, which could be aimed at the convertibles market. The other two new products undoubtedly qualify as entirely new categories for the company: an iWatch and an Apple television.

Speculation for an iWatch is nothing new. But DisplaySearch provides some interesting details, suggesting the device will come in two models, utilizing a 1.3-inch and 1.6-inch 320 x 320 AMOLED displays. The watch could debut in late 2014, the report asserts. Past rumors suggest that the watch will run a form of iOS and boast biometrics and other sensors, with a target battery life of four to five days.

At the 2013 D11 conference Cook expressed interest in the wearables category, saying he found it "incredibly interesting" and called the category "another very key branch of the tree." Even more, Apple's iWatch project may have already begun with the M7 coprocessor in the iPhone 5s.

As far as the rumored television, the rumor mill has been quiet for some time now. Apple already has the Apple TV set-top box, which the company referred to as a hobby project for a long time. Notably, however, Cook hasn't referred to the project as a hobby since 2012, perhaps suggesting Apple is taking television more seriously.

Why Apple needs new categories
The biggest concern looming over Apple stock for long-term shareholders is the company's growth potential. As the world's most valuable publicly traded company, the law of large numbers is a very real concern. Not only has revenue growth decelerated, but EPS growth has actually turned negative. 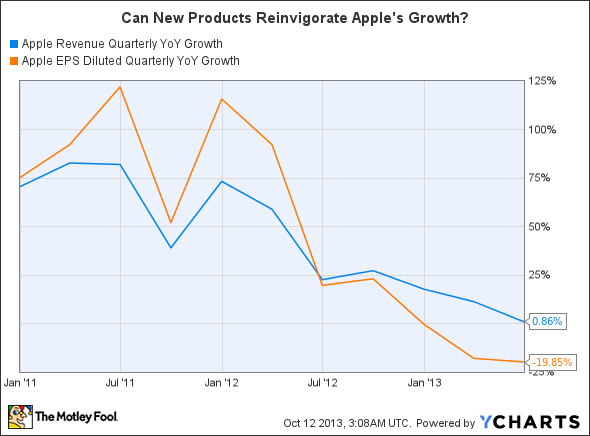 Apple has several "game changers" in the pipeline. At least that's what Cook said at the All Things Digital D11conference this year. And unless he was referring to the iPhone 5s, investors are still waiting. Product refreshes and product evolution are absolutely necessary to remain competitive. But it's new categories that could really make the difference for Apple, going forward. New categories could be Apple's only hope to reinvigorate the bottom line.