It's been a pretty good year for Shire (NASDAQ: SHPG), the Irish company best known for its portfolio of attention deficit hyperactive disorder, or ADHD, drugs. Shares of Shire have rallied more than 50% over the past 12 months and currently sit at all-time highs.

Shire also reported impressive third quarter earnings on Thursday, posting double-digit sales growth across more than half of its drug portfolio, indicating that this stock could still have a lot of room to run. 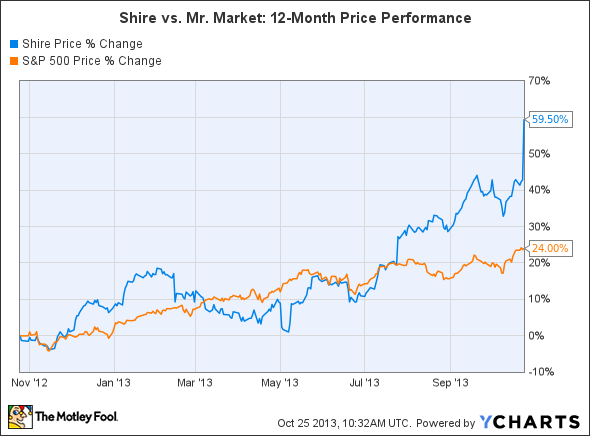 For the third quarter, Shire earned $1.77 per share on a non-GAAP adjusted basis, a 30% jump from the prior year quarter. On a GAAP-adjusted basis, its earnings climbed 23%. Total revenue rose 13% to $1.2 billion, fueled by strong growth of seven of its ten marketed products.

Let's meet the top seven
During the third quarter, sales of these seven treatments rose from the prior-year quarter.

ADHD remains a firm pillar of growth
These seven products account for 73% of Shire's top line, and two of them -- Vyvanse and Intuniv -- are ADHD medications. Both are newer treatments than its older ADHD treatment, Adderall XR, which lost patent projection in 2009.

Adderall contained a mix of D and L-amphetamines. D-amphetamines reduce overactivity and impulsiveness, while L-amphenatmines increase concetration but can raise anxiety levels. Vyvanse, by comparison, is completely composed of D-amphetamines coupled with amino acids, which reduces impulsiveness without the anxiety.

Both Adderall and Vyvanse are classified as stimulants, due to their use of amphetamines, and are classified as controlled substances by the DEA. To address this concern, Shire created Intuniv, a less potent, non-stimulant ADHD treatment.

Shire's treatments stand out in this market because there are very few drugs that treat ulcerative colitis directly. Lialda/Mezavant and Pentasa are different dosages of the same off-patent drug, mesalamine. In addition to mesalamine, doctors usually treat the disease with a variety of anti-inflammatory drugs, corticosteroids, or immunosuppresants.

A growing share of the uncrowded HAE market
Firazyr, a treatment for hereditary angioedema, or HAE, is another treatment to keep an eye on.

HAE is a very rare disease characterized by extreme swelling in the extremities, respiratory, and gastrointestinal systems. It affects only approximately one in every 10,000 to 50,000 people. Besides Firazyr, there are only three other HAE treatments on the market -- ViroPharma's (NASDAQ: VPHM), Cinryze Dyax's (NASDAQ: DYAX) Kalbitor, and CSL Behring's Berinert.

CSL Behring is a subsidiary of Australian company CSL Limited, which does not report the quarterly sales of Berinert. Yet as seen in this following chart, Firazyr is catching up quickly to Cinryze.

Firazyr and Kalbitor can be injected subcutaneously, while Cinryze and Berinert must be adminstered intravenously. ViroPhama tried to address this weakness with a partnership with Halozyme (NASDAQ:HALO), using Halozyme's human enzyme technology to develop a subcutaneous version of Cinryze. However, the project was scrapped due to concerns when patients started developing antibodies in response to the medication.

Cinryze is notably the only treatment that can be taken as a preventative measure -- the other three are administered to treat acute attacks.

Due to the rarity of the disease, treatments can be very expensive. ViroPharma's Cinryze, the most expensive one, can cost up to $350,000 per patient per year due to its continual use as a preventative measure. By comparison, Firazyr costs $6,180 per dose when acute attacks occur.

Another expensive treatment for a rare disease in Shire's portfolio is Elaprase, a treatment for Hunter syndrome, a debilitating lysosomal storage disease that affects only approximately 2,000 people worldwide. It costs even more than Cinryze, at $375,000 per patient per year.

Let's meet the three losers
Now that we've discussed Shire's opportunities for growth, let's take a look at the three laggards that posted double-digit declines during the third quarter.

The decline of Adderall XR should be the least surprising. The drug is now off patent and being sold by generic manufacturers such as Actavis. However, Shire still generates some royalty revenue from "authorized" generics from Teva Pharmaceutical and Impax. Moreover, older methylphenidate ADHD treatments, such as Ritalin and Johnson & Johnson's Concerta, are still widely used, further fragmenting the market.

The decline in Replagal sales was caused by a volume decline in Europe, unfavorable comparisons to the prior-year quarter (when large orders were placed from markets that order less frequently), and increased competition in the market for Fabry disease treatments.

The Foolish takeaway
In closing, it's clear that Shire has plenty of positive catalysts to propel it forward and only a few weaknesses.

The company not only recorded impressive growth in the top seven drugs that generate 73% of its total sales, but its expansion strategy is simple -- dominate the ADHD market, pump the ulcerative colitis market for steady revenue, and produce expensive treatments for rare diseases like HAE and Hunter Syndrome.

In my opinion, these three pillars of growth could make Shire a compelling long-term investment.