Gilead Sciences' stock has surged in 2013, but after a strong third quarter, can this pick keep up its run?

Earnings season's time for companies across the markets to prove their worth to investors, and Gilead Sciences (GILD -0.36%) stepped up to bat after the closing bell on Tuesday. It's been a big month for Gilead even before earnings, as the FDA panel recently gave unanimous backing for its oral hepatitis C drug sofosbuvir, which Gilead's hoping to use to beat rival AbbVie (ABBV 0.08%) as the first to break into the all-oral hep C market.

That won't impact Gilead's third quarter, but it's critical for the company's current lineup of drugs to continue performing well if Gilead's stock is to keep up with its 83% year-to-date rise. So how did Gilead do? Let's check out the facts you need to know.

Growth in the right places
Good news for investors expecting growth: Gilead didn't let you down.

The company grew its earnings per share in the third quarter to $0.47, up $0.04 from last year's mark of $0.48. That missed analyst expectations by a single cent, but Wall Street didn't seem to care as the stock jumped 1% in early after-hours trading.

Gilead's revenue jumped 15% in the third quarter to $2.78 billion, a sterling mark that topped analyst expectations. That's kept up Gilead's recent trend of soaring revenue, which has skyrocketed alongside the stock's price over the past three years. 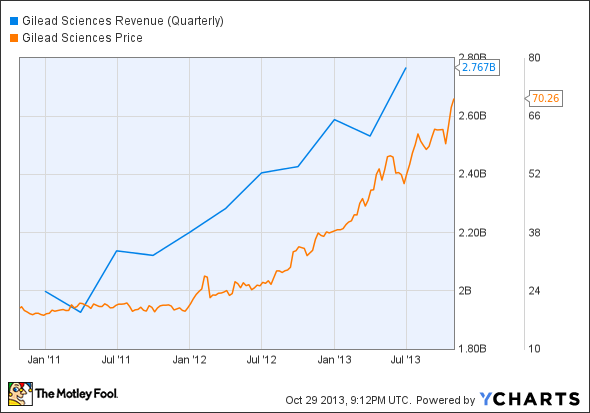 Which drugs hit the right marks for Gilead? The old reliable therapies of HIV therapy Atripla and fellow HIV treatment Truvalda have kept on rising despite the massive revenues they bring in already. Atripla's revenue jumped 4% for this quarter to nearly $900 million, doubling its growth from last year's third quarter. Truvalda, meanwhile, inched up by only 1% to more than $813 million in sales. Truvalda's growth might be small, but Gilead managed to turn around the drug's performance from last year's third quarter, when sales slid 1%.

The real growth engines are just getting started. HIV drug Complera -- also known as Eviplera -- recorded a whopping 112% growth for the quarter, racking up more than $210 million in revenue. It's a huge win for Gilead for the drug, which only recently cleared the FDA back in August 2011.

Complera's not the biggest drug on investors' watch, however. Stribild, an HIV pill that combines four different treatments into one therapy, pulled in more than $140 million in sales this quarter. Stribild was only approved late last year, but this drug's looking at a rosy future if its growth keeps up.

What's ahead for Gilead?
Gilead performed well in the third quarter, but where does the company go from here?

Stribild's the most immediate answer to the company's future. The drug has garnered peak sales estimates of up to $4.7 billion according to some analysts. Considering that Gilead's older therapies, such as Atripla, face rapidly approaching patent expirations, expect Stribild to evolve into the company's workhorse drug in the future. It's barely had a year to get its legs under it, but it's hard not to see Stribild turning into a blockbuster drug as soon as next year.

While Stribild's taking over the HIV market, keep a close eye on the race for oral hepatitis C dominance. AbbVie and Gilead are in a tight race, with both Gilead's sofosbuvir and AbbVie's unnamed hepatitis C compound winning breakthrough therapy status from the FDA -- the former only gaining the designation late last week.

Achillion Pharmaceuticals' (ACHN) own hepatitis C contender, sovaprevir, had been in the race to reach the oral hep C market as well. The market's estimated to grow to $20 billion, so for a company like Achillion, it's a huge prize at stake. Unfortunately, the FDA punched Achillion investors in the gut when it maintained a clinical hold on sovaprevir late last month. This company's fallen too far behind the leaders to catch up, and Gilead and AbbVie have turned into the two big players squaring off for market preeminence.

Can Gilead and sofosbuvir beat AbbVie to the market? Given the market's projected size, there will be plenty of sales left to whichever company enters in second, but the lure of a first-mover advantage here is great. Both companies think their treatments can reach the market sometime in 2014, but it's such a tight race right now that picking a clear-cut leader's not easy. For investors, both companies are on solid ground in the hepatitis C battle going forward.

Looking at a healthy tomorrow
In all, the third quarter rounded out nicely for Gilead. The older Atripla and Truvalda aren't showing their age, and Stribild's surge shows that Wall Street's lofty projections for this drug's future look on target. That future's what investors need to keep both eyes on, however. Stribild and sofosbuvir will make or break Gilead's next decade, and if these two drugs perform up to expectations, look for Gilead's stock surge to keep on rising.

Fool contributor Dan Carroll has no position in any stocks mentioned. The Motley Fool recommends Gilead Sciences. We Fools may not all hold the same opinions, but we all believe that considering a diverse range of insights makes us better investors. The Motley Fool has a disclosure policy.