Despite all the talk of increasing competition in Apple's ( AAPL -1.17% ) world, the company's gross profit margin actually trended upward sequentially when Apple reported fourth-quarter results on Monday. With improving gross margin comparisons and revenue that is still headed north, will Apple's bottom line finally begin to grow next quarter?

Mr. Market's dissatisfaction with Apple
Much of Apple's decline from all-time highs above $700 can be traced to the company's contracting gross profit margins. While revenue has trended mostly upward on a year-over-year basis for Apple in nearly every quarter for the past several years, declining profitability has weighed on Apple's bottom line. 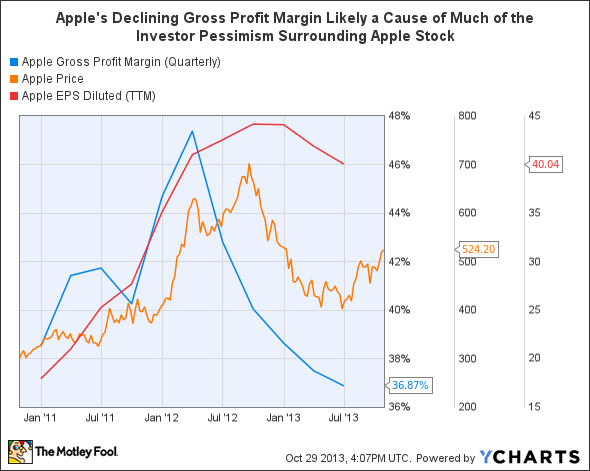 When you're at the top, the only way left to go is down, right? As the world's most valuable publicly traded company, it made sense for investors to be concerned when EPS started trending downward thanks to declining profitability. A conservative valuation to the tune of 10 times earnings began to make a lot of sense.

But for long-term investors with the insight to realize that it was only Apple's cost structure and not necessarily faltering pricing power that was driving gross margin down, this conservative valuation gave investors an opportunity to buy more Apple shares. For investors who bought into this cash cow in the low $400s or even $300s, Apple may even prove to make an incredible dividend stock.

Of course, it was no secret that Apple's gross margin wasn't likely to continue its downward trend. On average, the analyst consensus estimate for EPS growth has remained bullish throughout Apple's margin challenges. In fact, Apple's average annualized five-year EPS growth consensus analyst outlook on Yahoo! Finance has even remained in the positive double-digits over the past two years.

Back to growth
And now, finally, it looks like EPS may soon take its projected turn upward. 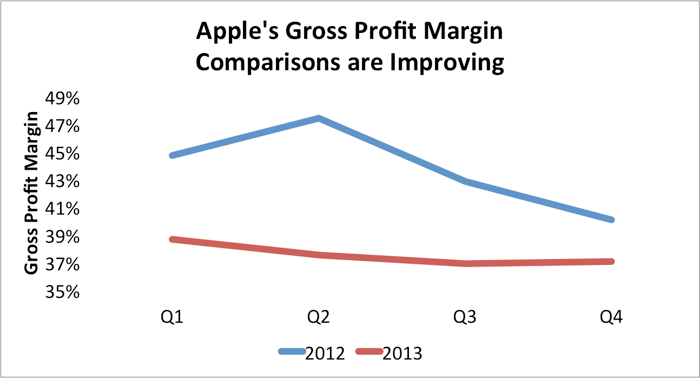 The gap between last year's gross profit margins and this year's continued to narrow this quarter, making EPS growth more feasible in fiscal 2014. Going forward, this trend looks like it will continue. Apple guided (all references to Apple's gross margin guidance are using midpoints) for 37% gross margin, narrowing the gap from the year-ago quarter to 160 basis points, from last quarter's gap of 300 basis points. Even more, if you adjust the guidance for Apple's changes to the way it defers revenue next quarter, the gap is actually closer to 100 basis points.

Unsurprisingly, analysts expect Apple to post its first year-over-year EPS increase next quarter (a consensus estimate for 7.3% year-over-year growth) after four quarters of declines (though Apple's first quarter of 2013 would have probably had a positive comparison if the quarter wasn't one week shorter). Given Apple's improving gross margin comparisons, guidance for year-over-year revenue growth, and a meaningful share repurchase program, Cook & Co. should have no trouble meeting analyst expectations.