According to the Climate Policy Initiative, we're on pace to spend about $359 billion this year to fight global warming. That's roughly a billion dollars a day. Depending on which side of the debate one stands, that's either not enough or way too much.

This year's projection is actually a few billion dollars lower than last year suggesting that funding to combat global warming has plateaued. One reason for this is pretty simply, private investors won't fund clean energy projects unless the returns are there.

That said, another reason why the overall spend isn't rising is because costs are actually falling. This cuts the capital outlay required for a project. A great example of this is found in solar panels. Take a look at the following chart from SunPower (NASDAQ:SPWR). 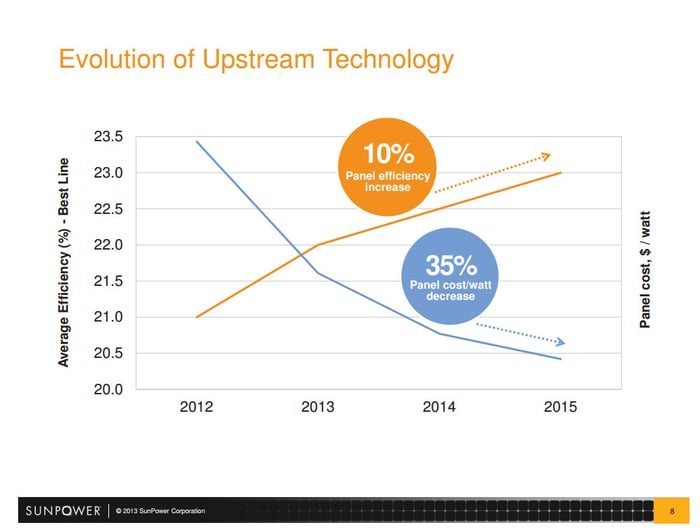 Not only have costs come down substantially, but the company projects costs to continue to decline. At the same time panels are becoming much more efficient. This is having a really big impact on the upfront investment of a solar project, which is helping to control the costs of renewables geared to fight global warming.

That said, some will debate whether global warming is a battle that even needs to be fought. However, one battle I think we can all agree upon is eliminating our dependence on foreign oil. This is where renewables like solar, wind and renewable natural gas products like Redeem from Clean Energy Fuels (NASDAQ:CLNE) can really make the cost of going green worth it.

This past September America imported 300 million barrels of oil. Of that about 40% of it is still coming from OPEC. That has America on pace to send $150 billion to OPEC this year. While overall imports have been dropping, a lot of that has to do with America's oil and gas boom. That boom, however, will one day run dry meaning renewables need to be part of the story going forward.

It would seem to me that we could win both wars by focusing, for example, on our nation's heavy duty trucking fleet. While only making up 1% of the U.S. vehicle fleet, trucks consume 20% of our transportation fuel or about 25 billion gallons of fuel each year. By switching our nation's trucks to American natural gas we can lower the greenhouse gas emissions that affect global warming while also cutting the money we send overseas.

While not everyone can get behind the process of hydraulic fracturing to solve this issue, Clean Energy Fuel's newest product, Redeem, is one that's hard not to support. According to the California Air Resource Board, it's 90% cleaner than diesel or gasoline. Further, because it is derived from biogenic methane it can actually result in a negative carbon footprint, which obviously is a big benefit in the fight against global warming. Finally, it's sold for about a dollar less on a gallon equivalent basis making it a very cost effective option. It's an option that simply makes a lot of sense.

There are many that think fighting global warming is a lost cause and that we're wasting a billion dollars a day. However, we're also wasting a lot of money and sending it to OPEC. So, I really don't see investments to fight global warming as being a waste, because those funds are also fighting our addiction to foreign oil. That's a fight that I think we can all agree is an important one to win.

Is Global Warming Worth A Billion Dollars a Day? @themotleyfool #stocks $SPWR $CLNE Next Article
Current