Medical device stocks have performed fairly well over the past year, even though the U.S. medical device tax, austerity measures in Europe, safety recalls, and fewer elective surgeries have cast a shadow over the industry.

Of the three leading companies in knee and hip implants -- Smith & Nephew (NYSE:SNN), Stryker (NYSE:SYK) and Zimmer Holdings (NYSE: ZMH) -- British company Smith & Nephew has trailed its rivals by a wide margin over the past year. 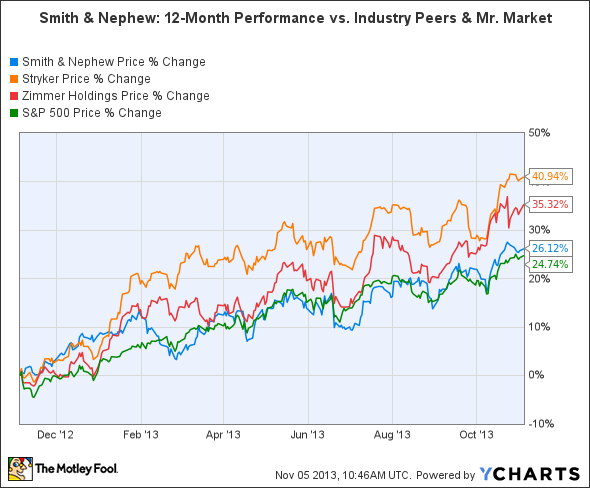 Why has Smith & Nephew been left behind as Stryker and Zimmer both ascended to new five-year highs?

The Foolish fundamentals
A fundamental comparison of Smith & Nephew against Stryker and Zimmer offers a puzzling picture.

In terms of revenue growth, earnings growth, and debt, Smith & Nephew is the best value. However, investors should note that Stryker's earnings have been distorted due to ongoing losses from two voluntary recalls.

A comparison of the margins of these three companies also reveals that Smith & Nephew is keeping pace with its peers with double-digit operating and profit margins.

Source: Yahoo! Finance as of Nov. 5, based on most-recent quarter.

Breaking down Smith & Nephew's revenue
On the surface, Smith & Nephew appears fundamentally cheaper than its peers. However, we need to dig deeper into its sources of revenue to find the source of its weak price performance.

Smith & Nephew competes with Stryker and Zimmer in the ASD segment, which accounts for more than two-thirds of its top line.

A smaller company with slower growth
In this segment, three categories of products -- knee implants, hip implants, and trauma products -- compete directly against products from Stryker and Zimmer. Although Smith & Nephew squeezed out single-digit growth from those three categories, it might not be enough to help it keep up with the competition.

Stryker, by comparison, reported flat year-over-year sales growth of $315 million in knee implants. However, sales of its hip implants rose 5.5% to $304 million, and sales of trauma products soared 18.1% to $277 million. Stryker's ability to post higher sales growth in those three categories should be troubling for Smith & Nephew investors -- especially since Stryker's businesses are much larger.

Zimmer, on the other hand, reported sales of $481 million in knee implants -- a 4% gain from the prior-year quarter. However, sales of hip implants slipped 0.5% to $338.4 million, and sales of trauma devices also fell 0.3% to $74.1 million. Again, we see the same problem for Smith & Nephew investors -- Zimmer's knee implants segment is more than double the size of Smith & Nephew's, yet it was able to post twice the sales growth.

Future challenges and advantages
Based on these observations, there are concerns that Smith & Nephew's top line growth has peaked with its knee, hip, and trauma businesses, which together account for 45% of its total revenue.

The company is looking toward growth in emerging markets, where it reported 24% year-over-year sales growth last quarter, to offset its flat growth in developed markets. However, it also stated that it expects to continue facing global pricing pressures.

Despite these weaknesses, Smith & Nephew still posted robust growth in its advanced wound management segment, which it gained from the acquisition of Healthpoint Biotherapeutics last year. The segment, which specializes in ointments with bioactive ingredients, is part of a new niche market which creates products that can heal wounds much faster than traditional treatments. Other companies actively pursuing this market include Shire and Osiris Therapeutics.

The Foolish takeaway
In closing, Smith & Nephew's slower price growth was not due to fundamental weakness, but rather to unfavorable comparisons to faster growing, larger industry peers. The company might also have to invest more heavily in marketing and acquisitions to keep up with competitors like Stryker, Zimmer, and J&J -- otherwise, it risks losing market share and getting left in the dust.

Why Has This Medical Device Maker Lagged Behind Its Industry Peers? @themotleyfool #stocks $SNN $SYK $JNJ Next Article
Current