In the United States, Dunkin' Brands (NASDAQ:DNKN) has focused its operations on the East Coast, with a stronghold in New England. It also opened its 500th location in New York City this past July. However, Dunkin' Brands sees gold in them thar hills west of the Mississippi River, and it's going after that gold by the truckload.

What's interesting about this is that California ranks No. 5 in the list of states with the most Starbucks (NASDAQ:SBUX) restaurants, behind Washington, Nevada, Colorado, and Oregon.

By entering the California market, Dunkin' Brands will have to go toe-to-toe with its biggest competitor. If history is any indication of future results, this could present a challenge. Quick-service restaurants in the coffee market tend to have trouble stealing market share from geographically established foes due to customer loyalty.

For instance, Dunkin' Brands once had 210 stores in Canada. It now only has five stores in Canada after seeing declining sales. Dunkin' Brands wasn't able to keep up with Tim Hortons (NYSE:THI.DL), which in addition to being an extremely popular brand north of the border, was also recently rated by Apco Insight as one of the "100 Most Loved Companies" in the world. This is based on a survey of 70,000 individuals with an emphasis on emotional attachment to brands. Tim Hortons ranked No. 61 on the list.

To further evidence the power of consumers' emotional attachment to brands, Tim Hortons failed to succeed in the New England market because of customer loyalty to Dunkin' Donuts restaurants. Therefore, it doesn't come down to quality, but which company can establish its presence and win customer loyalty in a region. Once that loyalty is established, it's difficult to break. This isn't to say that Dunkin' Brands will fail in California. Actually, it will probably succeed because it's an American brand that American consumers will be excited about having nearby. However, it will still be challenging to steal market share from Starbucks.

Dunkin' Brands also recently reached an agreement with HT2 Franchising to develop nine new restaurants in Reno throughout 2020, with the first location opening in 2015. HT2 Franchising is run by Nicole Hansen who has experience in the industry, having operated six coffee shops in Washington. This might give Dunkin' Brands an edge, and it will need one considering Starbucks has a big presence in Reno. Another plus is that Reno is ever-growing, having never seen a population decline for any 10-year time period since 1880. The more consumers, the better.

As far as Tim Hortons goes, its U.S. expansion is focused on a much different geographical area. The following is from the company's website:

"We are offering franchise opportunities to expand in the markets we currently serve including New York, Ohio, Pennsylvania, Maine and Michigan. We have future expansion plans in Grand Rapids, Michigan and Youngstown, Ohio, with more to come."

Therefore, Dunkin' Brands will also have to compete with Tim Hortons on its home turf, but it holds a clear advantage.

Peer comparisons by the numbers

Prior to looking at the charts and numbers below, it should be noted that while Starbucks has 9,405 company-owned restaurants and 8,661 licensed stores, Dunkin' Brands and Tim Hortons are primarily franchisors. For instance, Dunkin' Brands franchisees must fund the vast majority of the cost of a new restaurant, including advertising. Therefore, Dunkin' Brands isn't affected much by store costs, profitability, and commodity cost fluctuations. This leads to higher margins, which will be evidenced further below.

Franchisor or not, Starbucks has grown the fastest over the past five years. But all three companies have shown growth over this time frame: 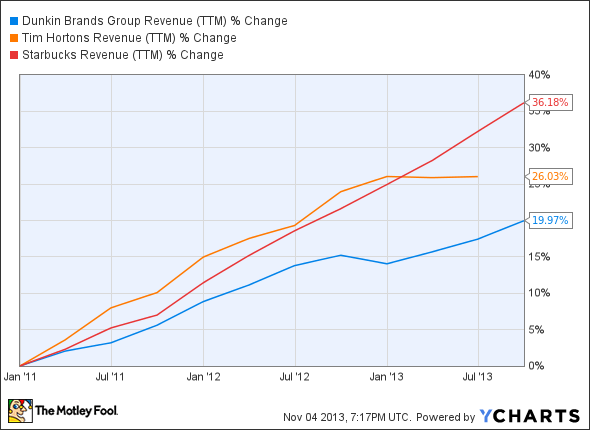 Dunkin' Brands and Starbucks are a bit expensive, but at least Starbucks is growing faster than Tim Hortons. While Dunkin' Brands isn't growing at the same pace, it might pick up speed with its westward expansion. And along with Tim Hortons, it offers the highest yield. However, Starbucks still offers a decent yield, and it has displayed very good debt management.

The bottom line
Dunkin' Brands is expanding west. By doing so, it will pit itself against the almighty Starbucks. However, this is a risk Dunkin' Brands needs to take in order to drive its top line. The potential rewards outweigh downside potential, but Dunkin' Brands is still a bit shy of Starbucks when it comes to high-quality operations.