"No subject attracts as much wrong commentary from people in positions of authority and influence as China's purchases of American government debt," wrote Slate blogger Matt Yglesias last month.

He may not be a person of authority, but asked about the nation's debt in an in-depth profile in Bloomberg this week, Euro Pacific Capital CEO and perennial pessimist Peter Schiff rang the China bell as loud as he could:

"The minute China tells America, 'I want my money back, I don't want to loan it you again, just give me the money,' then we default," Schiff said on the radio. "The sooner the Chinese do this, the sooner we can start fixing our economy, because the longer they wait, the bigger our problems get."

Stop, stop, stop. This is exactly what Yglesias is talking about.

We don't have to wait for China to stop lending us money, or to want its money back. It's been happening for the last two years. China has been a net shedder of Treasury bonds since 2011: 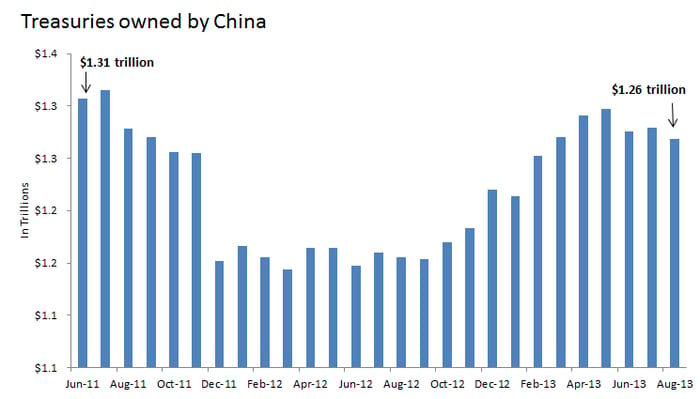 What has this done to our debt markets? Did we default? Of course not. Interest rates on 10-year bonds are a full percentage point lower today than in mid-2011, when China's ownership of Treasuries peaked.

The ownership of our national debt is a subject of constant confusion and misconception, so let's put some numbers on the table. Here's who owns the nation's $16.7 trillion of debt as of March 2013 (the latest data available): 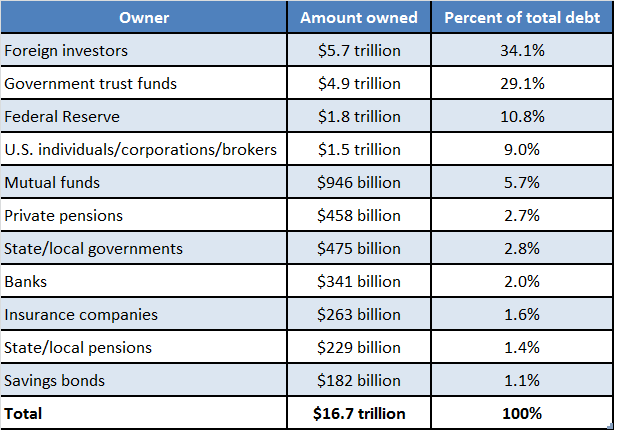 And here are the top 10 foreign owners, as of March:

There's something odd about how we react to the amount of debt China owns. Like Schiff, a lot of Americans seem to view China's Treasury ownership as a threat, but pay no attention to the fact that Japan holds almost the same amount. And while China has slowly been shedding U.S. debt, Japan has been steadily accumulating Treasuries -- more than $250 billion in the last two years alone. I'll let a sociologist ponder why that is, but I think this shows these fears have far more to do with emotions than facts.

Leaders in countries like China don't lend money to the United States because they like us, or because we remind them of their grandson. They do it because it's in their interest. America imports close to half a trillion dollars worth of goods from China every year. China needs that business, and the best way to ensure it sticks around is to keep the U.S. dollar strong versus its currency, the renminbi. It does that by buying a lot of American assets, like Treasuries and mortgage-backed securities. If the dollar were to crash, China could lose just as much as (or more than) America.

More importantly, lenders can't just say "I want my money back," as Schiff implies. Bonds have maturities. If you want your money back, you have to either wait for that maturity date or sell your bonds in the open market to someone who is willing to wait.

So, what might happen if a major bond holder were to sell a huge amount of Treasuries? This, too, isn't something we have to wait for. It happened five years ago.

Just as the financial crisis was heating up, the Federal Reserve needed to make room on its balance sheet to bail out the banking system. It did this by selling $300 billion of Treasuries between November 2007 and June 2008. Long-term interest rates actually fell during this period, from 4.2% to 4%.

Debt isn't something to belittle, but as psychologist Daniel Kahneman once wrote: "Human beings cannot comprehend very large or very small numbers. It would be useful for us to acknowledge that fact." The debt market is so enormous that not only does China's $1.3 trillion Treasury portfolio make up less than 8% of Treasuries outstanding, but rapid sales in the hundreds of billions of dollars can be absorbed fairly easily.

Think of it this way. China owns about 8% of our debt. Warren Buffett owns about 8% of Coca-Cola. How often do you hear Coke investors worrying that Buffett is going to dump his Coke stake? You don't, for two reasons: It's not in his best interest to sell, and even if he did the market could absorb the sales over time without much fuss. It's a similar situation with China's ownership of our debt.