Shares of Volcano (NASDAQ:VOLC) imploded at the end of October after the medical device maker reported a weaker-than-expected third quarter.

The stock is now down more than 18% over the past month, and has underperformed its larger industry peers -- Boston Scientific (NYSE:BSX), St. Jude Medical (NYSE:STJ), and Medtronic (NYSE:MDT) -- by a wide margin over the past year. 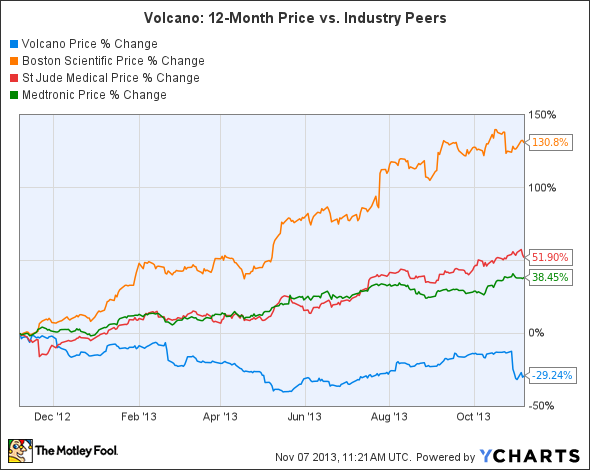 Will shares of Volcano continue to tumble, or is further downside limited at today's price?

A disappointing third quarter
For its third quarter, Volcano reported a non-GAAP loss of $0.08 per share, down sharply from a profit of $0.04 that it reported in the prior-year quarter. Analysts projected a much narrower loss of only a penny.

The company also reduced its sales outlook for the rest of the year to a range between $391 million to $395 million -- down from its original forecast of $394 million to $400 million.

Volcano competes directly with two much larger companies -- Boston Scientific and St. Jude Medical -- in both categories. Volcano uses its FFR technology to determine whether a stent (mesh tube) is necessary during certain procedures. If so, then it uses its IVUS products to guide the placement of the stent.

At the beginning of 2013, Volcano held an 87% market share in IVUS/FFR products, compared to Boston Scientific's 13% share.

However, Illumien notably combines OCT technology with FFR technology -- making it a possible disruptive threat to both Volcano and Boston Scientific.

However, Volcano's sales by region were lopsided. Sales in Europe, which accounts for 19% of the core medical (IVUS/FFR/console) segment's revenue, climbed by double digits across the board. Console sales in Europe rose a whopping 78% from the prior-year quarter.

Yet sales in Japan, which accounts for 28% of the segment's sales, were disappointing. Sales of FFR products climbed 8%, but were completely offset by a 19% decline in sales of IVUS products. Sales of consoles, a much smaller business in Japan, also declined.

However, sales held steady in the United States, which accounts for 48% of the core medical segment's sales. U.S. sales of FFR and IVUS products were the strongest, climbing by 10% and 7%, respectively.

Will newer products boost sales again?
Looking forward, Volcano hopes that newer products will boost its top-line growth. Notable new products include the Verrata FFR wire, the Crux inferior vena cava filter, the Sync-Rx platform the company purchased for $17.3 million last year, and the Pioneer Plus re-entry catheter it acquired from Medtronic in August. These products are all intended to diversify its product line toward more applications.

The Medtronic acquisition is noteworthy, because the Pioneer Plus will allow Volcano to diagnose and treat peripheral arterial disease. The acquisition also moves Volcano from the diagnostics market into the therapeutics one.

Volcano believes that these new products should boost its top-line growth back into the "low to mid-teens" by the beginning of 2015. It also intends to cut costs by discontinuing forward-looking development programs for its IVUS, Intra-Cardiac Echo, and OCT products. Volcano intends to shift those resources back toward marketing and distribution initiatives to push current products into new markets.

Will activist pressure cause Volcano to erupt?
Volcano's recent weakness attracted a major investment from activist investor Glenn Welling's Engaged Capital. In an SEC filing on Oct. 31, Volcano disclosed that Engaged had purchased 5.1% of Volcano's outstanding shares, and was demanding changes be made.

Three of Engaged's main demands include a revision to the management compensation package, a $200 million share buyback, and a renewed focus on using organic growth instead of acquisitions to boost top line growth.

Although Volcano has remained silent on the matter, Engaged pointed out that Volcano has missed Wall Street estimates on its top line for six of the past seven quarters, and lowered its full-year guidance for four of the past six. Engaged also expressed doubts that the company's claims of sustainable low to mid-teens growth would be achievable.

Investors interested in this sector might consider larger, more diversified medical device makers such as Boston Scientific, St. Jude Medical, or Medtronic -- all of which have brighter growth prospects than Volcano.