Macy's (NYSE:M) is one of the nation's most iconic retail destinations. With its 840 retail stores, and the recognition from its Thanksgiving Day Parade, Macy's has become a staple in American culture. Still, this retailer is still not immune to the changing landscape of retail; after a disappointing second quarter, Macy's has to prove it can stand up to competitors like Kohl's (NYSE:KSS) and Nordstrom (NYSE:JWN)

Macy's third-quarter earnings are on tap this week, here are three things you should be looking for when the retailer reports on Wednesday.

What does management have to say about consumers?
After a disappointing second quarter, in which comparable sales declined by 0.8%, Macy's management was quick to blame a sluggish consumer. This type of excuse is always tough to evaluate; on one hand retail is very sensitive to consumer sentiment, on the other hand, Kohl's was still able to grow comparable sales by 0.9% during its quarter. While Nordstrom also missed comparable sales expectations, it beat on earnings handily.

The chorus of traditional retailers, including Macy's and Nordstrom, that blamed the consumer last quarter was a bit puzzling. Somehow we are being told to believe that consumers have enough money to buy new homes and autos, but not jeans? Furthermore, if the consumer is so frugal, than why have e-commerce sales grown, both in sheer revenue and as a percent of retail sales, rapidly since 2008? 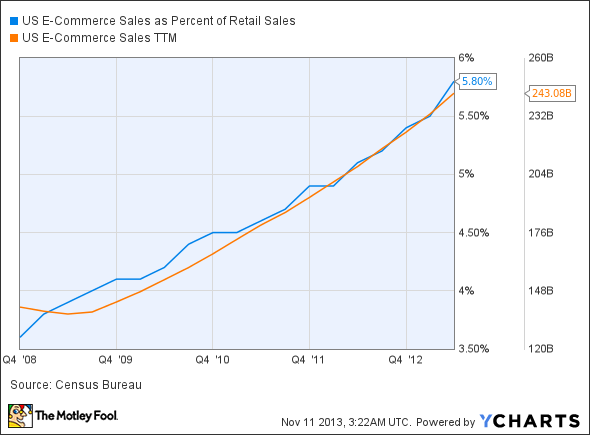 In general, I get a bit worried when management blames external factors, such as consumer spending or the economy, but since Macy's wasn't alone in doing so, let's see what they say this time. All three companies report earnings this week and, with some surprisingly strong jobs numbers lately, Macy's management team shouldn't be making excuses.

Same-store sales, and the holiday outlook
After reporting sales numbers that did nothing short of disappoint, Macy's tried to alleviate investors' fears by mentioning that the back-to-school season, heading into the third quarter, looked strong. We'll want to hear more about back-to-school, and considering Macy's boosted seasonal hiring 8% this year, we should hear an upbeat holiday forecast.

Macy's sales slid in the second quarter and, while it revised its outlook downward, same-store sales are still expected to grow more than 2% for the year.

All of these things are relative; if the entire sector disappoints it may be more palatable. So look to see whether Macy's can turn comparable sales positive, and how its "seasons" (back-to-school, etc.) stacked up against Nordstrom's and Kohl's.

Getting sticky with it
Whether it's the turkey parade, pictures with Santa, or in-store credit cards, Macy's has done a better job than most at keeping consumers in its stores. That unique experience, and ability to maintain customer loyalty, is what separates Macy's and Nordstrom from troubled retailers like J.C. Penney.

If I were a shareholder in either Macy's or Nordstrom, I'd want to hear a "consumer retention update" during every earnings call. These businesses thrive on having "fans" as customers, so we need assurance that they're sticking around amid changes in the retail landscape. The heavy "discounting" that Macy's mentioned in the second quarter was troubling, as it could be a sign of a customer base that is becoming less loyal.

Considering how rough the past quarter was, and the lofty expectations that lay ahead, I'd like to hear management discuss plans to keep customers in the stores. So listen to Macy's call, then listen in on Nordstrom's and Kohl's too. It's the little things, like growth in "loyalty plan" subscriptions, that will differentiate these companies.

Favorable consumer trends are the key to Macy's success
Macy's management team was quick to blame external factors for last quarter's meek results. This week, with fresh quarterly results, we'll get a better idea of where the company is headed. Only you can determine whether Macy's quarterly woes were temporary, or perhaps part of a larger problem. As a shareholder, you are part-owner of the company, and you should expect some clear answers.

When Macy's reports earnings this week you should look for good news concerning same-store sales growth, consumer sentiment, and customer loyalty trends. These factors will be the key to long-term success at Macy's.