Have you ever asked yourself why some people make more money than others? Since the late 1970s, the gap between rich and poor in the U.S. has been steadily widening. Today, income inequality is an undisputed reality for the vast majority of Americans.

In his 2012 State of the Union address, President Barack Obama described this burning problem as "the defining issue of our time." However, he stressed that "if you worked hard, you could do well enough to raise a family, own a home, send your kids to college, and put a little away for retirement".

But what if you want to achieve more than that? What does it take to become filthy rich? 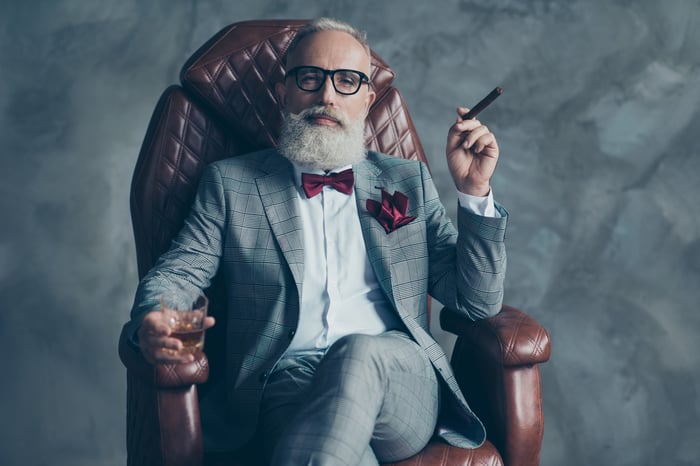 If you are a rationalist, chances are you are richer than your neighbor

According to the Myers-Briggs Type Indicator (MBTI) -- a psychometric questionnaire based on the famous psychologist Carl Jung's typological theories -- there are 16 possible personality types, divided into four categories: artisans, guardians, idealists, and rationalists.

An in-depth infographic I stumbled upon recently from the Career Assessment Site shows that of all of these personality types, a specific type of rationalists -- the ENTJ -- scores the highest average household income. Idealists, on the other hand, and especially those who fit with the INFP description -- in other words, are more affectionate, calm, and shy than others -- are less likely to cash in on their traits. 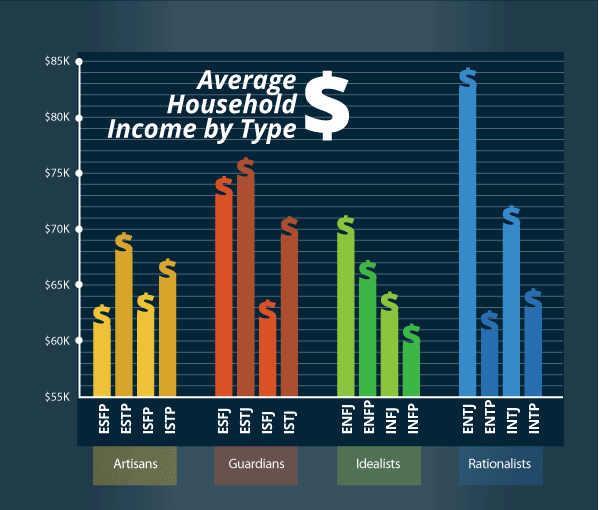 So, next time you ask yourself why your neighbor drives a Lamborghini while you are stuck with an old Volvo, you'll know the answer. Apparently, when it comes to your earning potential, your character makes all the difference.

How do ENTJs stay ahead of the game?

In general, rationalists are visionary people, but, at the same time, very practical. If they see a problem, they fix it. ENTJs in particular are good with money, determinant to the point where they intimidate those around them, and they are always in the driver's seat. They don't settle for second best. They aim for the stars. To put it differently, ENTJs are the kind of people most likely to run the show.

Not surprisingly, some of the big names in the business world suit this type, including Bill Gates and investing guru Warren Buffett. The late Steve Jobs was also, according to experts, the epitome of an ENTJ personality.

ENTJs think ahead to the future and approach problems from several different angles.

"Someone's sitting in the shade today because someone planted a tree a long time ago," Warren Buffett once observed.

"Should you find yourself in a chronically leaking boat, energy devoted to changing vessels is likely to be more productive than energy devoted to patching leaks," he told shareholders back in 1985 when discussing his worst ever investment, the textile mill that gave its name to his financial powerhouse, Berkshire Hathaway.

Moreover, ENTJ personalities don't deal well with inefficiency and they loathe incompetence. They can be harsh and unforgiving when they realize that someone or something has failed to live up to their expectations.

In the summer of 2008, Apple launched MobileMe, its first real stab at a cloud storage and delivery service. But it got off to a terrible start. It failed to impress users and proved to be one of Apple's major missteps. Jobs was hopping mad at the MobileMe team. "You've tarnished Apple's reputation," he yelled at them, and he didn't think twice before naming a new team leader.

Last but not least, people with this kind of personality can come across as arrogant. They have a very high self-esteem and do not hesitate to be honest and straightforward. However, often their self-confidence turns into arrogance.

In the early 2000s, Bill Gates was at loggerheads with Judge Thomas Jackson, who had announced that Microsoft was an illegal monopoly that had to be split into two. The judge told The New Yorker at the time: "I think he [Bill Gates] has a Napoleonic concept of himself and his company, an arrogance that derives from power and unalloyed success, with no leavening hard experience, no reverses."

Can you train yourself to become a millionaire?

Old habits die hard. People may be forced to develop certain traits or habits temporarily depending on the circumstances. Nevertheless, at the end of the day, we are who we are.

Is it just a coincidence that rationalists in the U.S. claim a 10.3% share of the population and, at the same time, the top 10% of richest households make up for around half of the income earned last year?

Or is it by a stroke of luck that, based on an analysis conducted by economist Emmanuel Saez, over the 20-year period between 1993 and 2012 the top 1% of U.S. earners saw its income's real growth climb as much as 86%?

Buffett believes that "if you're in the luckiest 1% of humanity, you owe it to the rest of humanity to think about the other 99% percent." But, do all rationalists think like that?