Yum! Brands (NYSE:YUM) owns market-leading brands Pizza Hut, Taco Bell, and Kentucky Fried Chicken. As you might already know, the avian flu and chicken-quality issues in China have put a dent in the company's armor. However, it's just a dent, and dents are usually repaired. Try to ignore those China issues since they're in the past now. Instead, let's focus on the company's game plan going forward. We'll take a look at Yum! Brands versus McDonald's (NYSE:MCD) and Chipotle Mexican Grill (NYSE:CMG) to determine if Yum! Brands offers the best value on the investor menu.

Let's take a look at the four key strategies Yum! Brands is implementing.

1. Build leading brands in China in every significant category.
Yum! Brands is highly focused on China for two logical reasons. One, it has an estimated population of 1.3 billion. If Yum! Brands has been successful in the United States with just north of 300 million people, that puts the company's potential more than four times higher in China. The other reason is that the middle class is rising in China, meaning that more of those 1.3 billion consumers are turning into potential customers daily.

The third reason hasn't been mentioned by Yum! Brands (for obvious reasons: The Chinese consumer isn't in the midst of a health-conscious rage like consumers in the United States. Rather, they're excited to have American brands, and they're eager to gobble up some pizza and chicken. The demand for Mexican food isn't high in China, therefore, Taco Bell isn't a part of the plan. However, Yum! Brands plans on aggressive expansion with Pizza Hut and Kentucky Fried Chicken in China. Those aren't only the only brands Yum! Brands is touting. East Dawning (Chinese food) and Little Sheep (casual-dining restaurants) are also in play.

Up until this year, Yum! China has seen double-digit unit growth, system-sales growth in the mid-teens, and comps growth in the mid-single digits. Yum! Brands (as a whole) had aimed for 10% earnings-per-share growth in fiscal year 2013, which was lowered in February to a mid-single-digit decline due to the issues mentioned above. Now, after unexpected tax rate hikes and weaker-than-expected sales in China, fiscal year 2013 guidance has been lowered to a decline between the high single and low double digits. This might sound like a major negative, but these dark, overhanging clouds should eventually be looked at as a small blip in Yum! Brands' history.

2. Drive aggressive international expansion and build strong brands everywhere.
Yum! Brands has now opened more than 700 restaurants for 13 consecutive years. It doesn't plan on slowing down. It now looks to expand aggressively in India, France (highest unit volumes of any KFC business in the world), Germany, Russia, Vietnam, and Africa, while also building out its existing markets.

4. Drive industry-leading, long-term shareholder and franchisee value.
Whether you're a firm believer in the company's growth potential or not, it can't be argued that Yum! Brands isn't excellent at returning capital to shareholders. Actually, it's one of the best in the quick-service industry. However, you just want to know about what's ahead, which is understandable.

Yum! Brands targets an annual dividend payout ratio of 35%-40% of net income. A concrete number can't be given for buybacks, since Yum! Brands bases its buybacks on situational opportunities. 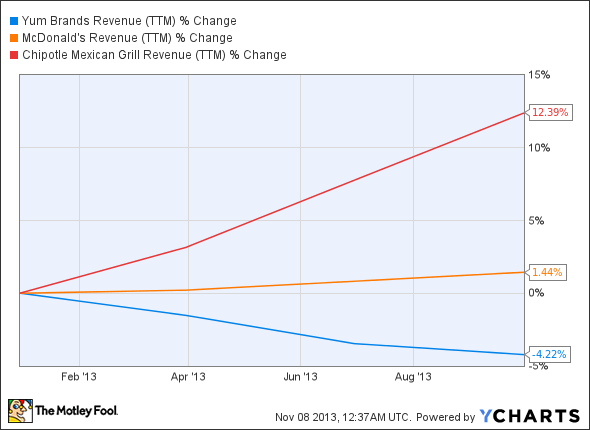 Yum! Brands has lagged its peers, but we already know why. If you look at the five-year chart below, then you will see that Yum! Brands was performing well on the top line prior to the incidents in China, and outpacing McDonald's in 2012: 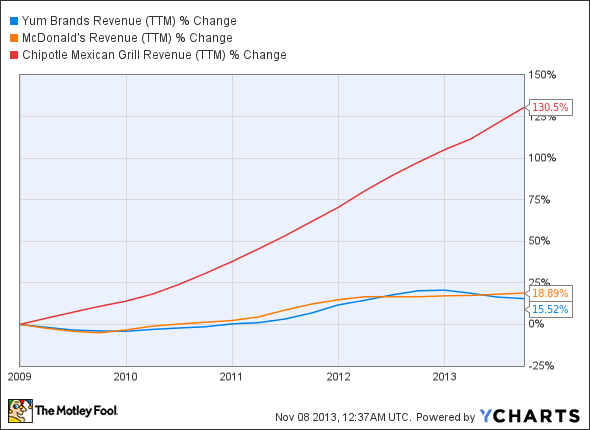 Similar trends have played themselves out on the bottom line. 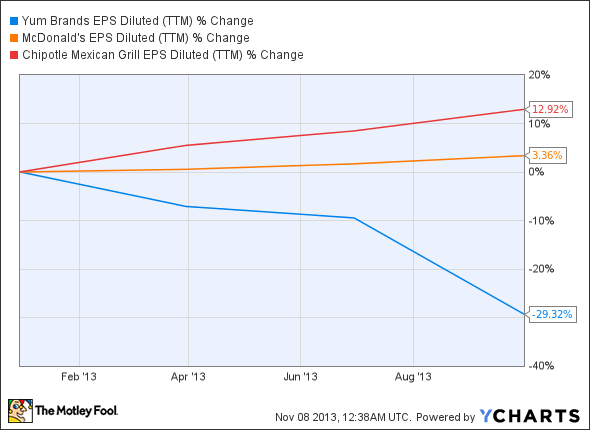 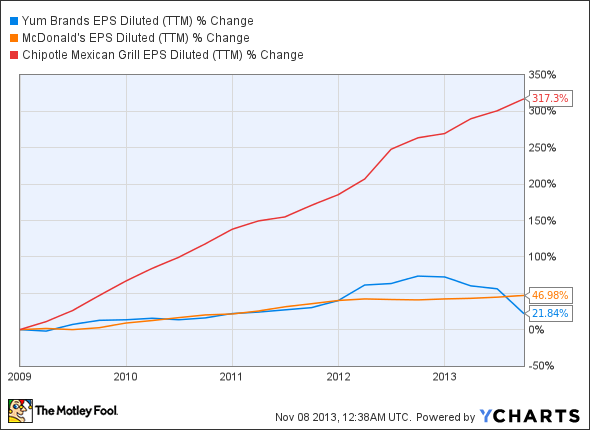 The bottom line
Recent events have likely presented a good bargain for Yum! Brands. However, McDonald's presents an even better bargain based on valuation, margins, and yield. We can also throw in brand strength and marketing power. As far as Chipotle goes, it's easily the fastest growing of the three, giving it the most stock appreciation potential. However, its higher valuation makes it riskier, and there are no dividends to collect if the stock disappoints. This decision would depend on your risk tolerance.