Jos. A Bank's response was short and to the point, stating that it was disappointed in Men's Wearhouse's position, and that Men's Wearhouse wasn't acting in the best interest of its shareholders. Jos. A Bank reaffirmed that its offer would remain available until November 14, 2013.

Johnson & Weaver announced that it's investigating Men's Wearhouse on the premise that the company isn't acting in the best interest of its shareholders. Johnson & Weaver points out that once the Jos. A Bank offer was made public, on October 9, 2013, the stock traded as high as $47.29, and once the offer was rejected on November 5, 2013, the stock dropped to $42.09. At the time of this writing, the stock is trading at $45.09, making it difficult to decipher which side's position is more justifiable.

Jos. A Bank announces that it expects its Q3 adjusted profit to improve year over year. EPS is expected to come in between $0.49-$0.51, versus $0.47 in the year-ago quarter. Sales also expected to increase in the mid-single digits, and comps are expected to be flat.

Consider top-line performances for these two companies over the past year: 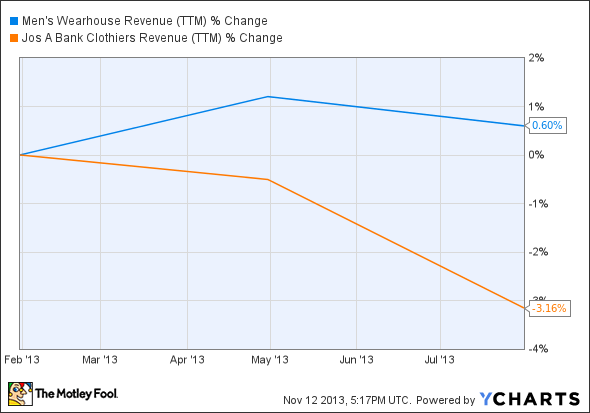 Neither company is tearing the cover off the ball, but Men's Wearhouse is outperforming. Now take a look at the bottom line: 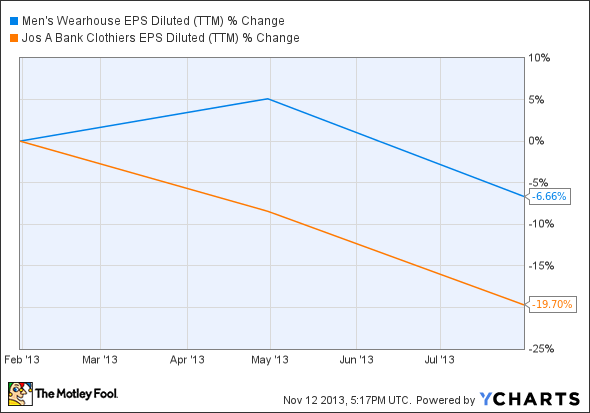 A similar pattern presents itself.

If you're interested in investing in menswear, then you might also want to consider going with a company with much broader geographic exposure, marketing power, and brand diversification in Macy's (NYSE:M).

Also consider Macy's performance on the top and bottom lines over the past year: 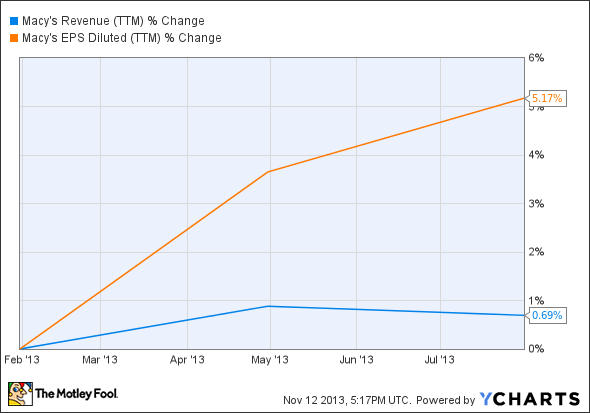 While these trends are far from spectacular, they indicate stronger momentum than both Men's Wearhouse and Jos. A Bank.

The bottom line
A deal between Men's Wearhouse and Jos. A Bank doesn't seem likely at this point in time, which means increased downside potential for Men's Wearhouse after the stock's run-up based on the potential of a deal. However, the potential of a deal can't be ruled out. Jos. A Bank, on the other hand, recently increased its outlook for the third quarter. But without a deal, it will take a lot for Jos. A Bank to consistently improve its top line in the current retail environment. Macy's has been performing relatively well (not exceptionally well), it offers greater geographic exposure, broad product diversification in menswear, it yields 2.20%, and investors don't have to deal with high drama.