Google’s family of cloud-based apps have become essential tools for everyday productivity for many people. How was Google able to so quickly turn the tables on Microsoft, which had been the dominant force in both operating systems and productivity software?

As a writer, there's one piece of software that I simply can't live without -- Google (GOOGL 5.11%) Docs. 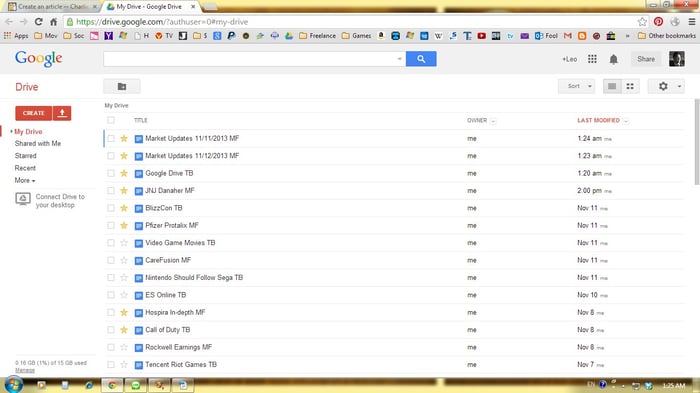 Screenshot from my Google Drive.

More importantly, Office users like myself would never have to lose hours of hard work due to software or hardware crashes again. And best of all, Google's revolutionary piece of software, which now forms the core of its cloud-based suite Google Drive, has always been free -- which has always made it a more attractive choice compared to Microsoft's Office suite.

Last week, Google updated its Drive app to support multiple account sign-ins and enhanced its integration into the rest of Google's cloud-based ecosystem -- which includes GMail, Google Plus, YouTube, Google Maps, and Chrome. These two updates now allow users with multiple accounts -- for example, work and personal ones -- to seamlessly switch between the two.

Google also added new functions for users to print their files via Google Cloud Print and AirPrint, and improved its support for Apple (AAPL 2.45%) iOS 7 devices. Google also added some new "quick action buttons" on Gmail, allowing users to do some common tasks -- such as confirming subscriptions or replying to event invitations -- directly without opening the body of the email. In addition, attachments are now directly sent to Drive, eliminating the need to download them.

These enhancements boost the effectiveness of Google's ecosystem, making it a software suite that individuals and businesses are becoming increasingly dependent on.

Therefore, let's take a moment to reflect on how Google has entrenched itself as an indispensable part of our daily lives.

It all goes back to Microsoft

Back in 1995, Microsoft CEO Bill Gates rightly believed that the Internet would become an inseparable part of personal computing, and merged the company's web browser, Internet Explorer, with its operating system, Windows 95.

However, Microsoft's intentions didn't become clear until the release of Internet Explorer 4 in 1997, when it introduced the "Active Desktop," which combined the web browser with desktop folders -- effectively making it an extension of the operating system.

This was considered an anti-competitive move by other web browser companies, such as Netscape. Therefore, the Department of Justice shattered Microsoft's dreams of creating the ultimate browser-based operating system in 1999, when it ruled that Microsoft had violated antitrust laws on various hardware and software fronts. As a result, Microsoft had to separate Internet Explorer from Windows and make concessions to rivals such as Apple, Lotus, Java, and Netscape, among others.

That story should sound awfully familiar to users of Google's cloud-based ecosystem. Just like Microsoft, Google had a mission to create an operating system that was inseparable from the Internet. However, Google didn't get in trouble with the DOJ or its industry peers -- mainly because it distributed everything for free.

The main difference between the two companies is that while Google built its ecosystem around its core search engine, Microsoft attempted to add features to its operating system, which was already dominating PC sales at the time.

Here's a timeline on how Google expanded from a simple search engine into the cloud-based ecosystem on which many of us are dependent on today.

To put it simply, Google's strategy was the exact opposite of Microsoft's.

Google purchased or created services that it knew the public would depend on, then tied them all together into a single ecosystem that could be accessed with a single login -- the Gmail account. It offered all of these services for free, knowing that they would all eventually funnel back into its main source of revenue -- its search engine.

Today, Google has two operating systems -- Chrome OS for personal computers and Android for mobile devices -- which seamlessly tie a user's Google services together across multiple devices, all for free.

Microsoft, on the other hand, initially charged customers to install Windows, charged them again for installing Office, and then allowed third-party companies to charge them again to install additional software in its operating system. In addition, it offered Windows and Office in tiered pricing versions, each with additional "premium" features.

Unfortunately for Microsoft, that business model only worked when there wasn't a viable alternative. Microsoft didn't have to worry too much in the 1990s, when its main competitors -- Apple and Linux -- only occupied small niche markets.

However, Google's popularity as a search engine gave it credibility, and over the past five years, Chrome and Android have become viable alternatives to Microsoft operating systems -- especially on lower-powered laptops, hybrid devices, and tablets.

Is Google really a major threat to Microsoft?

Even though Chrome OS hasn't risen to topple Windows yet, take a look at this chart.

Judging from the 81% of computer users who still use Windows XP, Windows Vista, and Windows 7, it's safe to say that customers aren't keen on paying for new operating systems -- which means more customers might install Chrome OS or another Linux distribution instead of Windows 8.

In terms of productivity software, Microsoft still has an overwhelming lead with over 90% of the market -- but that figure doesn't account for cloud-based alternatives like Google Docs. In fact, a survey from Gartner earlier this year showed that Google's market share in cloud-based productivity suites rose from 10% in 2007 to 50% in 2012.

That stunning figure doesn't bode well for Microsoft, which entered the cloud-based productivity software game extremely late in 2011 with Office 365, which still costs $20 per month.

In closing, the writing's on the wall, folks -- Microsoft still doesn't get the three main reasons we love Google's ecosystem -- it's seamless, it works, and it's free.