There is one small regional bank that has been growing its business, operates in a relatively save environment and, on a comparable basis, presents an attractive valuation.

Synovus Financial Corporation (NYSE:SNV) is a regional bank in the truest sense of the word. With a principal presence in Georgia, Alabama, and South Carolina -- it falls right into the third tier of banks, and narrowly made its way onto the top 50 bank holding company list, placing at number 50 with $26.2 billion in assets. To put that into perspective, consider that, if JPMorgan Chase were to acquire the Columbus, Georgia-based Synovus, JPMorgan would only grow by 1.1%, or roughly the same rate of growth it saw from the second quarter to the third quarter of this year.

Yet, even despite its small stature, there are three reasons to consider an investment in Synovus.

1. Continued growth net income
The year 2013 has been an eventful one for Synovus, as the bank redeemed its TARP funds to the U.S. Treasury, and it completed a $185 million common stock offering, and a $130 million preferred stock offering. Yet, the bank has continued its steady performance, and has seen continual rises in income available to common shareholders as shown in the chart below:

In fact, through the first nine months of 2013, Synovus' net income is up 33% relative to the same period in 2012. Compare that to other regional bank peers New York Community Bancorp and Huntington Bancshares (NASDAQ:HBAN), and you see that Synovus has performed admirably when you compare 2012 to 2013:

It should be noted that a big part of the increase in Synovus is due to its shrinking provision for loan losses (what it expects to lose on the loans it makes); however, the bank did see its expenses fall by $50 million over the first nine months of the year and, in 2012, it actually realized a benefit of $2 million from taxes versus an expense of $72 million in 2013. All in all, the gain in net income is undoubtedly a good thing.

2. Strong commercial loan portfolio
Of the $26.2 billion in assets at Synovus, $19.7 billion (or roughly 75%) is found in loans, which is roughly the same percentage of assets at both the aforementioned Huntington Bancshares, and New York Community Bancorp. However, one of the compelling things about Synovus is the diversity of loans it has on its books, and the amount of commercial loans it has: 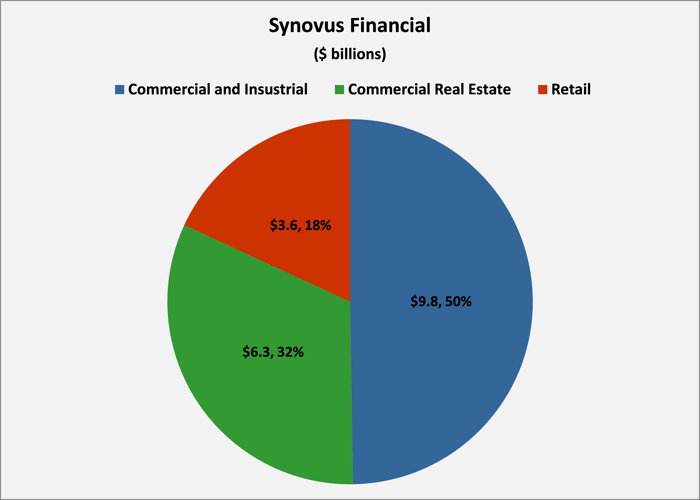 More than 80% of the loans it carries are commercial loans, which compares favorably to 52%  of the loans at Huntington Bancshares. Although New York Community Bancorp does not break it out in the same way, it has a somewhat odd loan portfolio because it is so heavily invested in mortgages, especially multi-family (apartment buildings and the like) and commercial real estate, which represent 85%, or $27.2 billion, of its $32.1 billion in loans.

Shown a little differently, you can see in the chart below the diversity of commercial loans that are found on Synovus' books:

The nice thing about Synovus is that its diversified commercial loan portfolio will help insulate against risk, as commercial loans are often more profitable and safe investments for banks.

3. It has a lot of room for growth
From the third quarter of 2012 to the third quarter of 2013, Synovus has watched its tangible book value per share (which represents the equity the company has that is actually available to shareholders) rise from $2.07, to $2.86, which is an increase of almost 40%. Even in spite of this, its price-to-tangible book value remains well below that of its peers:

Source: Company Investor Relations, ROA and ROE through the first nine months of 2013

While it clearly is unable to match Huntington Bancshares and New York Community Bancorp in their ability to generate returns, one of the thoughts behind Synovus is that, as market conditions improve, so, too, will its ability to return value to shareholders. And considering it is already on that track through the first nine months of this year, there could be growth ahead for this bank.