General Electric is done with this retail-banking business. William Carlos Williams can keep his red wheelbarrow. What's next for GE investors and Optimizer Plus customers? Image source: GE's Optimizer Plus website

General Electric (NYSE:GE) is getting out of the consumer-facing financial-services business.

In an 8-K SEC filing this morning, GE announced plans to spin out its retail finance business sometime in 2014. The exit will come in two distinct steps as GE first spins off 20% of the division in a public-market IPO and then exchanges retail finance shares for common GE shares in 2015. At that point, the entire operation will be in the hands of a new set of shareholders.

As befits a huge conglomerate with a seat on the Dow Jones (DJINDICES:^DJI) roundtable, GE is advised by fellow Dow Jones (DJINDICES:^DJI) components JPMorgan Chase (NYSE:JPM) and Goldman Sachs (NYSE:GS) in this deal. I would not be surprised to see Goldman and JPMorgan taking a more active role in this process, picking up significant portions of the GE retail banking IPO and its follow-on offerings.

It's not that GE needs to get out of a disastrous operation, but it's more of an attempt to stake out a clearer companywide strategy. GE Finance accounts for more than 30% of GE's total revenue, not to mention 55% of the company's net segment profits. More than $2 billion of that $7.6 billion financial profit haul comes from the consumer segment, a.k.a. GE retail banking.

The consumer banking assets are also of fairly high quality: 3.4% of the retail accounts have been classified as "nonearning receivables," which is a gentler term for unpaid mortgages, credit card bills at least three months overdue, and other soon-to-be write-offs. To weigh that metric against other Dow Jones megabanks (and yes, GE sure qualifies as a money-center bank with $274 billion in loans outstanding), Bank of America (NYSE:BAC) does better with a 2.4% nonperforming loans ratio. Transaction underwriter JPMorgan is actually doing worse, with 3.6% of its consumer loans headed for the scrap heap.

This split will let General Electrics investors focus on either consumer-centric banking or the larger conglomerate of industrial operations and supporting financial services. Likewise, GE's management will be free to double down on its commercial divisions without trampling on the ambitions of its retail-minded executives.

The core GE operations will still be one of the most diversified single-stock options on the market, just with a tighter aim at business-to-business operations. The basic GE stock should continue to be a reasonable proxy for the returns of the Dow Jones, but the retail bank could take a very different path (higher or lower) depending on the quality of management steering the new ship. Add GE to your Foolish watchlist and stay tuned for more detail. 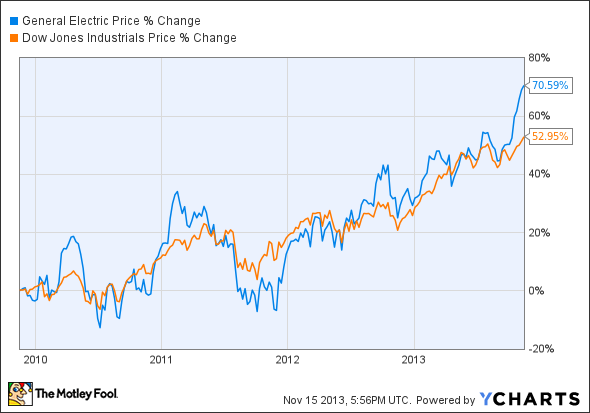 For consumers, the General Electric Optimizer Plus bank will continue to operate as before. It's a fairly standard consumer-banking deal with a variety of accounts and services on tap, but it's a mostly virtual one with only one physical branch location (in Bridgewater, N.J.).

Whether the operation ends up a stand-alone bank or is swallowed up by a larger bank like Goldman Sachs or JPMorgan, not much will change for its customers. Expect the division to spin off with a healthy serving of backing capital, ensuring that the bank stays in business for the long haul.