Please ensure Javascript is enabled for purposes of website accessibility
Log In Help Join The Motley Fool
Free Article Join Over 1 Million Premium Members And Get More In-Depth Stock Guidance and Research
By Matthew DiLallo - Nov 17, 2013 at 9:15AM

America’s energy boom is creating a lot of winners. What’s surprising is the boom’s biggest loser. 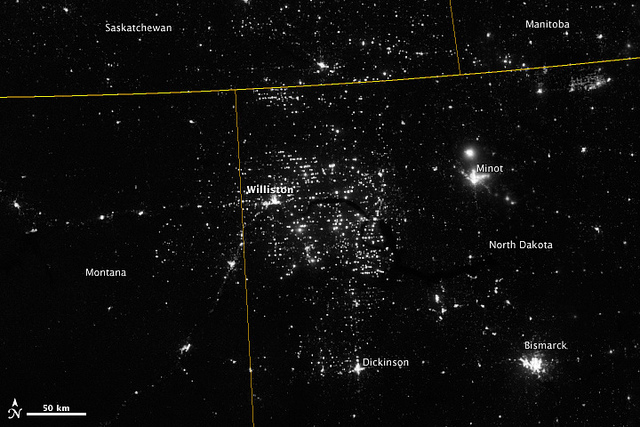 The above photo was taken from space. It shows what appears to be a scattering of cities in Northwest North Dakota. The only problem is that this part of North Dakota is among the least densely populated in the U.S. What NASA took a picture of was oil wells where the natural gas is being flared off.

America's energy boom has actually made natural gas the surprising loser of the boom. In the Bakken, for example, 29% of the natural gas that is produced in association with oil is flared off. This is because wells are either not connected to natural gas pipelines or if a well is connected the infrastructure is inadequate. Natural gas has become an afterthought.

Last year, for example, Bakken focused oil producer Kodiak Oil & Gas (NYSE: KOG) produced 6.6 billion cubic feet of gas as well as 4.8 million barrels of oil. But because of the lack of pipelines or system capacity, Kodiak Oil and Gas was forced to flare 3.3 billion cubic feet of natural gas, or half of its total natural gas production. This didn't have a major impact on Kodiak's operations last year as 89% of its production was oil. Still, Kodiak flared enough natural gas last year to heat a small city for one year.

The good news is that companies like Kodiak Oil & Gas are flaring less gas. The company noted in its last quarterly report that while it is still flaring natural gas it has connected a majority of its wells to pipelines. As more pipelines are built it will lead to additional volumes of natural gas being captured and sold.

The Bakken isn't the only place that natural gas has become an afterthought. Companies like EOG Resources (EOG 3.19%) are not investing any money to grow dry gas production in the U.S. The only reason EOG Resources is still modestly growing its gas volumes is because it's producing gas in association with oil or natural gas liquids in places like the Bakken or Eagle Ford Shale. This has dry gas shale plays like the Barnett and Haynesville seeing little investment.

What's most interesting is that until demand picks up, the price of natural gas isn't likely to budge much because we have plenty of associated natural gas that is still coming online. As new pipelines are built in the Bakken, it will enable the state to reduce its flaring so that the 29% that's currently flared can be used. Combine that with the continued focus on liquids and natural gas will continue to be the surprising loser of America's energy boom.