There is a difference between saying that a company is good, and saying that it is a good investment. In the case of Rackspace (NYSE:RAX), its current business trajectory is suggesting that it's not a good investment even though that doesn't mean it’s not a great company. Unfortunately, increasing competition within the cloud computing provision market from the likes of Amazon (NASDAQ:AMZN) Web Services (AWS) and Microsoft's Azure is threatening Rackspace, even as the company improves its already high level of service.

Rackspace's margin
It's difficult competing with Microsoft and Amazon in the best of times, but it's a lot harder when they are both cutting prices in order to win market share in a fast-growing business. Throw Google into the mix and its almost unfair. The fact is that those three tech giants can easily subsidize lowering prices (and therefore margins) because they have add-on advantages to winning new business.

Indeed, AWS is reported to have recently cut prices by 10% across all its regions, and it's hard not to think that its response to Microsoft's aggressive discounting actions. The two companies have seemingly been locked in a price battle, the effects of which are starting to show in Rackspace's margins.

Rackspace invests in order to grow
In defense of the company, it's currently investing to support growth created by customers adopting its OpenStack public cloud options. In addition, its management has long claimed that its "Fanatical Support" is its unique selling point within a competitive industry. Unfortunately, a high level of support usually implies a high level of investment, and Rackspace appears to be running hard in order to stand still on that front.

These facts play to the heart of the questions with Rackspace. Can it leverage up its investments and start to generate meaningful cash flow in future? Alternatively, is it forced to invest in continually buying customer gear so that its customers can benefit from outsourcing IT expenditures in order to generate growth? 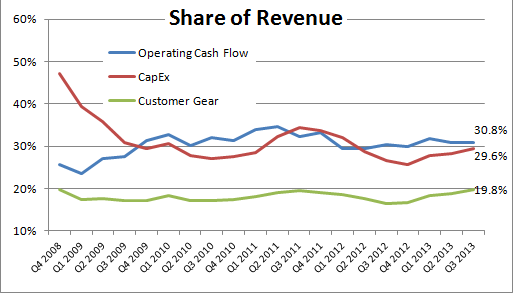 Unfortunately, it looks like Rackspace is finding it difficult to generate meaningful cash flows. As 2013 has gone on, its customer gear requirements have gone up. Consequently, customer gear now makes up nearly 67% of capital expenditures. Its one thing to provide fanatical support to generate revenue growth, but it's another thing to generate cash to be returned to shareholders.

Rackspace's bottom line
All told, conditions look like they are getting tougher for Rackspace. Competition from Microsoft and Amazon appears to be pressuring prices, while it's having to increase expenditures in order to service clients.

Rackspace has generated just $18.7 million generated in adjusted free-cash flow (its own figures) so far in 2013, but sits on a current market cap of $5.9 billion. Meanwhile, it still hasn't demonstrated that its business model can generate the kind of cash flows that could justify its valuation in future. It doesn't look like a good value to me.