The global menswear market is expected to exceed $402 billion by 2014 , with the Americas contributing around 35% of sales. However, not all companies have benefited from this market equally. Jos. A. Bank Clothiers (NASDAQ: JOSB) and The Men's Wearhouse (NYSE:TLRD) are such examples.

The situation looks rather grim in the upcoming quarters as well. It is expected that going into the holiday season, men's apparel will see the sharpest decline of 3.62%. As these two companies only address the menswear market segment, they might be in for difficult times.

However, more diversified companies such as Nordstrom (NYSE:JWN) will be better positioned. Nordstrom has performed better than these peers as we see in the chart below. However, Nordstrom's forecast has been cautious as well, which led to a pullback in the stock price in recent months. 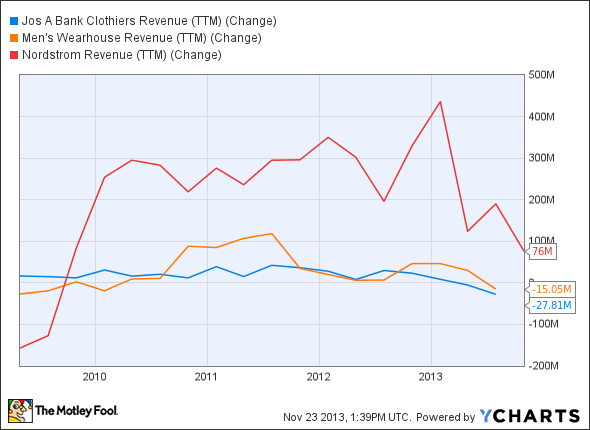 Nordstrom's diversification has worked well for the company. Jos. A. Bank and Men's Wearhouse have seen steep earnings per share and sales declines, and the trend might continue going forward.

If we look at the U.S. Consumer Sentiment trend since November 2012, we find that 2013 has been plagued by sentiment lower than the level at the end of 2012. This had an effect on consumer spending that is evident from the general lackluster results from the retail sector, which depends on discretionary spending. 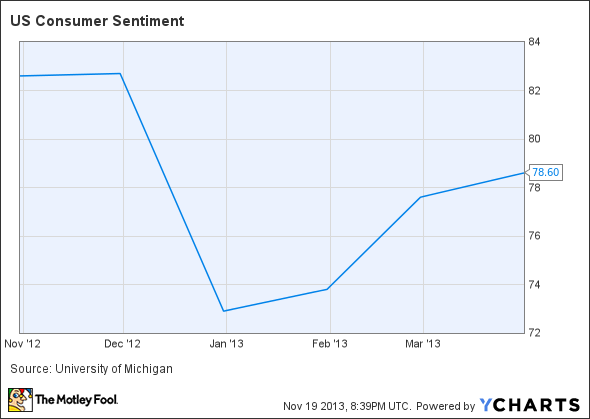 US Consumer Sentiment data by YCharts

However, an increase in housing starts and auto sales signifies that consumers are spending heavily in these segments in order to take advantage of the still low loan rates. With dollars already committed to big ticket items, it is natural that apparel, accessories, and shoes are pushed down on the priority list. 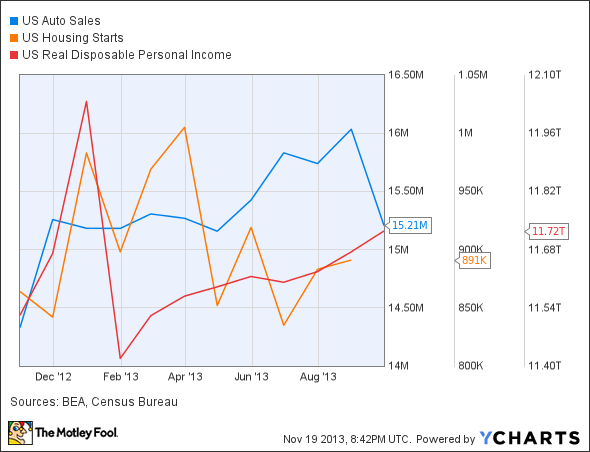 US Auto Sales data by YCharts

Men's Wearhouse has been facing tough times. It fired its co-founder. In addition, it couldn't really create a successful factory-to-stores integration model by acquiring JA Holding for $97.5 million . As mentioned above, the menswear segment is expected to see the sharpest decline going into the holiday season . On the back of these negative sentiments, the company revised its guidance downwards, thereby sending a signal that the future isn't going to be rosy.

Men's Wearhouse had also trimmed its comps growth rate expectation by 2% in the previous quarter.

As compared to Men's Wearhouse, Jos. A. Bank has seen far worse declines in revenue and EPS. Over the last ten quarters, it has been able to meet estimates on earnings only once. The earnings estimates have been constantly on the decline and there's nothing that seems to be working right for the company.

Net income has decreased a whopping 38%, sales have declined 10.7%, and comparable store sales have declined a huge 15.9%, primarily as a result of reduced traffic . In short, it failed to impress investors in its latest quarter. Its inventory increased 4% due to the addition of 43 new stores, but since comps and sales are falling, store expansion might not help much if the company doesn't get the right merchandise on its shelves.

Jos. A. Bank's earnings are expected to decline both this year and the next, while the five-year expected earnings compound annual growth rate is 12%. Since the stock looks expensive at a P/E of 21.91 times trailing earnings and all vital metrics are dropping, investors should stay away from it.

Why Nordstrom is the best pick

Nordstrom distinguishes itself from these two peers on all fronts. It serves a wider customer base and has a better product mix, and hence it is less vulnerable to consumer spending shifts.

Nordstrom expanded its footprint by opening 21 new Rack stores in the third quarter and plans to open more than 30 in 2014 . In addition, the company is also set to expand into Canada in 2014 with both full line and Rack stores, expecting additional sales of $1 billion every year. In addition, Nordstrom is focusing on its e-commerce channel. It has had two consecutive years of at least 30% sales growth at nordstrom.com. This year, the company is on track for a similar increase.

Nordstrom revised its outlook for the year and it remains the best of the three. The current outlook for earnings per diluted share was revised to $3.65-$3.70 which compares to its prior outlook of $3.60-$3.70. Also, the projected same-store sales increase of approximately 2.5% is consistent with the year-to-date trend. Nordstrom's diversified business model has helped it perform well while others have struggled.

Moreover, Nordstrom is pretty cheap at a trailing P/E of 16.41 considering that earnings are expected to grow at a CAGR of 11.6% for the next five years . So, a diversified business, expansion plans, inexpensive valuation, and a dividend yield of 1.9% make Nordstrom a good pick.