Remember when emerging markets were destined to make investors rich? It hasn't worked out that way in 2013 -- not after China's leading stocks have disappointed and Brazil's economy has slowed down from the lofty growth projections of a few years ago. Those can't-miss growth opportunities just haven't panned out yet for the most part.

Yet the potential is there in emerging markets, no doubt. Leading medical device firms have made big acquisitions in developing nations, led by Medtronic (NYSE:MDT) and Stryker (NYSE:SYK) in China over the past year. Orthopedics rival Smith & Nephew (NYSE:SNN) isn't shying away from the emerging markets game, either. It's beefed up its own exposure abroad lately with its purchase of a quarter of the business of Brazilian device firm Politic Saude. But is this the right move for this medical device giant in its emerging markets push?

Smith & Nephew makes a move
Emerging markets have been a big boon for Smith & Nephew, which has been hit with the headwinds of stiff competition and pricing pressures that have slowed many leaders in the medical device industry. Even with the company's shaky financial performance recently, however, this stock has been on a roll for investors over the past two years. 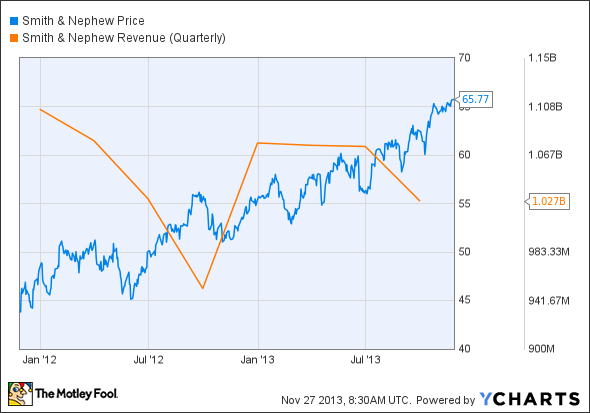 Advanced wound management products have been a leader at Smith & Nephew. The division posted a 4% sales growth in 2012, doubling the growth of the company's advanced surgical devices segment, which is more than three times as large by revenue.

The Politic Saude acquisition is also one in a line of overseas buys for Smith & Nephew, which has already made a purchase of Indian orthopedics and trauma products firm Sushrut Surgicals earlier in the year, among other international acquisitions. Emerging markets have been as good as advertised for Smith & Nephew recently: Revenue from emerging and international economies climbed 11% year over year in 2012, a much stronger figure than the 1% growth seen in advanced and developed economies.

Brazil's potent health-care potential could add to that total, however -- and have investors seeing green in 2014 and beyond.

Brazil's burgeoning potential
Professional services firm PricewaterhouseCoopers projects that Brazil's rising middle class and growing population of elderly citizens will push greater health-care spending in this major emerging economy. Brazil's already among the top 10 largest economies in the world, and other companies besides Smith & Nephew have taken note of its potential.

UnitedHealth Group (NYSE:UNH), America's largest publicly traded insurer, purchased Brazilian private health insurer Amil for more than $4 billion last year. UnitedHealth's betting on the rise of the Brazilian middle class to bolster membership rolls in the country's insurance market, and if the company's gamble pays off, look for other health-care powerhouses -- including Smith & Nephew and its device rivals -- to benefit as well.

Smith & Nephew's also hoping to keep up with the leaders in the device industry. Medtronic's purchase of Chinese orthopedics company Kanghui Holdings last year for more than $750 million fired a shot across the bow of the leading orthopedics firms looking to invest in emerging markets. Stryker matched Medtronic with its purchase of China's Trauson Holdings for more than $760 million early in 2013. While Smith & Nephew's been working hard in emerging markets, it will need to keep up its assault on developing economies if it wants to stay on pace with its rivals.

Still on course for gains
Even with competition breathing down its neck, however, Smith & Nephew's buy of Politic Saude's assets should help in a big way. Brazil's too large of a market for Smith & Nephew to ignore, and this is a big step in boosting the profile of the company's fastest-growing division in one of the world's most notable developing economies.

This is only one piece of the puzzle for Smith & Nephew, which hopes to continue acquiring bolt-on pieces to drive growth in the future. However, it's a solid step forward for one of the world's top orthopedics firms -- and another win for shareholders who have already cheered on a strong year for this stock.