Please ensure Javascript is enabled for purposes of website accessibility
Log In Help Join The Motley Fool
Free Article Join Over 1 Million Premium Members And Get More In-Depth Stock Guidance and Research
By Morgan Housel - Nov 29, 2013 at 10:42AM

These are the good ol' days.

Comedian Louis C.K. does a great skit showing how oblivious we can be when complaining about our lives.

We get frustrated when our cell phone reception goes out for 30 seconds without realizing how amazing cell phone technology is. "Can you give it a second?" Louis asks. "It's going to space. Can you give a second to get back from space?"

"The worst cell phone in the world is a miracle," he says. "Why are you so mad at it?"

It's a wise question to ask. When something doesn't work perfectly but is still much better than it used to be, you are better off. Our perceptions and emotions play an evil trick by convincing us otherwise.

"Everything is amazing and nobody is happy," Louis says.

This could apply to the U.S. economy, too.

"Jump in percentage of those saying things not going well," reads one headline.

"Americans see more doom and gloom in the economy," writes another.

"Americans Are Pessimistic, Miserable and Completely Fed Up," warns another.

A lot of Americans are in bad shape. Their problems are worse than bad cell phone service. They're unemployed, uninsured, underpaid, underappreciated, overmedicated, and overpromised.

But this is nothing new. It has always been true. And by most measures, most Americans live in a better, safer, more prosperous world today than they could have dreamed of a few decades ago.

These are the good ol' days
Take income. You've probably read about how average household incomes have declined since 2000, adjusted for inflation. It's a scary statistic.

But it needs perspective.

2000 was a fantasyland bubble where dynastic wealth could be created with fake dot-com companies in your parents' basements. Same with the ensuing years, when teenagers became overnight real estate tycoons. Those were the aberrations, not today. Benchmarking success to bubble years gives an inflated sense of reality. 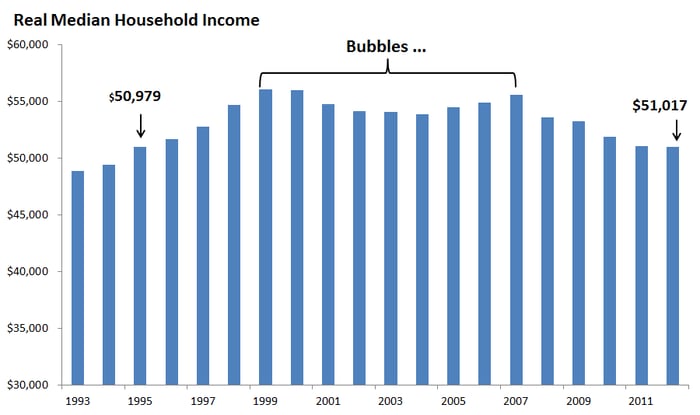 Do you remember 1995? It was awesome. We were in awe of how prosperous the country was. Consumer confidence was near a multi-decade high. "Our economy is the healthiest it has been in three decades," President Clinton said in his State of the Union address that year. "We have the lowest combined rates of unemployment and inflation in 27 years. We have created nearly 8 million new jobs. America is selling more cars than Japan for the first time since the 1970s. And for three years in a row, we have had a record number of new businesses started in our country."

And folks, the average American family earns more today than it did back then, adjusted for inflation.

Go ahead, argue that 18 years of near-stagnant real incomes is a failure. I hear you. Just realize that 2.8 billion people around the world earn less than $2 a day, and you're upset that we aren't richer than we were when we were already rich and felt like kings. "First-world problems," as they say. 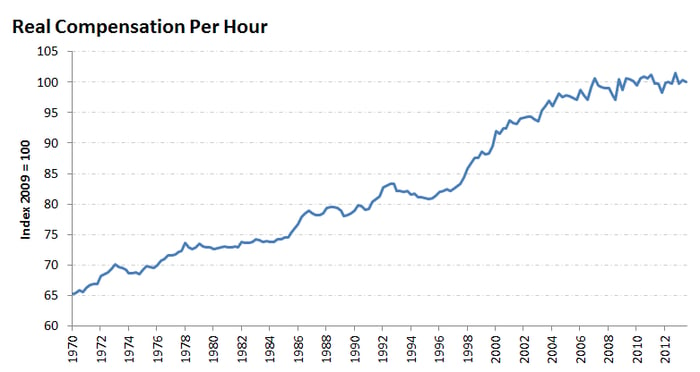 What are we getting in return for rising health insurance costs? 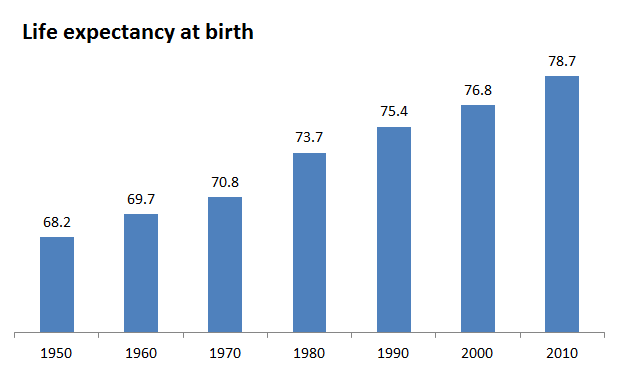 Think about that: In two generations, the average American gained a decade of life expectancy.

Do you know what can happen in a decade? A little more than 10 years ago, AOL dominated the Internet, oil cost $13 a barrel, Fortune magazine named Enron one of America's "most admired corporations," and Apple was a joke. Everything can change, in other words. You get an extra one of those now.

Minorities have made even greater progress. African Americans have gained 15 years of life expectancy since 1950.

Odds are this will continue. Biomedical gerontologist Aubrey de Grey thinks the first person to live to see their 150th birthday is already alive. As San Francisco Chronicle columnist Jon Carroll joked, "Americans have come to view death as optional."

How often do we have BREAKING NEWS when stocks fall half a percent? Several times a week. But no one ever says, "Breaking news: Far Fewer Children are Dying Than Used To." We ignore the really important news because it happens slowly, but we obsess over trivial news because it happens all day long. This is another evil trick our minds (and media) play on us.

Not only are fewer children dying, but older Americans are experiencing something they couldn't dream about a few decades ago: retirement.

You get to wake up and literally do anything you want
We constantly worry about the looming "retirement funding crisis" in America without realizing that the entire concept of retirement is unique to the last five decades.

It wasn't long ago that the average American man had two stages of life: work and death.

Even in the nostalgic 1960s, more than 40% of men age 65 and over were still working or looking for work: 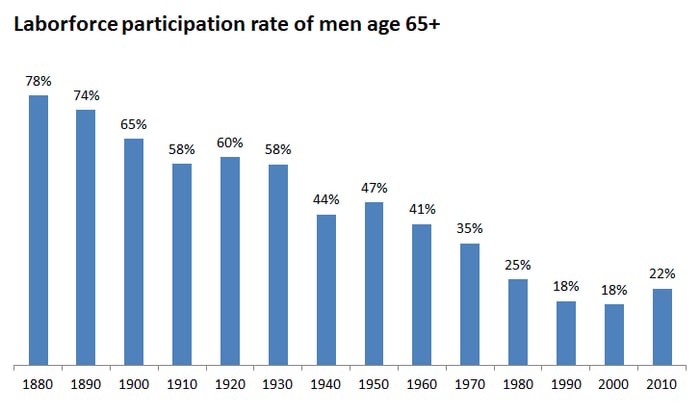 Poverty among the elderly has plunged, too. More than a quarter of those over age 65 were living in poverty in the 1960s, compared with less than 10% today. Medicare has only been around since the 1960s. Before that, as one 1963 Social Security report put it, "paying for necessary health services and providing adequate insurance for non-budgetable expenses remains beyond the economic capabilities of most aged persons." As Frederick Lewis Allen wrote in his 1950 book The Big Change: "One out of every four families dependent on elderly people and two out of every three single elderly men and women had to get along in 1948 on less than $20 per week [$188 in today's dollars]."

The job market Americans are retiring from has changed dramatically, too -- largely for the better.

Perhaps you've heard about the laborforce participation rate falling over the last few years. It's true -- it's declined, though largely due to demographics.

But a higher percentage of American adults are working or looking for work today than were in the 1950s, 1960s, or 1970s. That's mostly because more women have entered the laborforce. And why did they enter? Because for the first time in history, they were treated as somewhat equal to men. The economy was excellent for white males in the 1950s and 1960s, but as Stephanie Coontz recently wrote:

In most states, his wife could not have taken out a loan or a credit card in her own name. If she wanted a job, she had to turn to the "Help Wanted -- Female" section of the classifieds, where she might learn, as one 1963 ad in this newspaper put it, that "you must be really beautiful" to be hired. In 42 states, a homemaker had no legal claim on the earnings of her husband.

The workplace has become safer, too. In 1975, there were nine cases of occupational injuries or illness per 100 full-time workers per year, according to the Bureau of Labor Statistics. By 2009, it was fewer than four.

Employers now allow their workers to have a life outside of work, which not long ago was a charming but unrealistic concept. Frederick Lewis Allan described working life in the first half of the 20th century:

The average working day was in the neighborhood of 10 hours, 6 days a week. In business offices there was a growing trend toward a Saturday half holiday, but if anyone had suggested a five-day week he would have been considered demented.

We're using that extra time to have fun. The average American household now spends three times as much of its income on recreation as it did in the 1950s, according to the Consumer Expenditure Survey. The average employee with five years on the job receives 22 days paid vacation and holiday pay per year, up from 16 days in 1970, according to the Bureau of Labor Statistics.

"Today," Matt Ridley writes in his book The Rational Optimist, "of Americans officially designated as 'poor,' 99 per cent have electricity, running water, flush toilets, and a refrigerator; 95 per cent have a television, 88 per cent a telephone, 71 per cent a car and 70 percent air conditioning. Cornelius Vanderbilt had none of these."

I'm not arguing that inefficiencies, injustices, and inequalities don't exist today. Of course, they do. But they always have, and by comparison, we are living in one of the most prosperous times in the history of this world.

We have a lot to be thankful for.