In the short-to-medium term, the stock market works in mysterious ways. For instance, on the day of this writing, Sears (NASDAQ:SHLDQ), a company that consistently bleeds money, is up north of 6%. This happens while a company showing consistent top-line growth, Lions Gate Entertainment, sells off 10% because weekend box-office sales for The Hunger Games: Catching Fire totaled "only" $161.1 million. The consensus estimate was $166 million.

While this might present an excellent buying opportunity for Lions Gate Entertainment, you might not want to fall for the recent optimism on Sears. Let's take a look at why.

Too much competition
When is the last time you visited a Sears? When was the last time you visited a Target (NYSE:TGT) or a Wal-Mart (NYSE:WMT)? I'm going to assume that most Foolish readers are more likely to visit a Target than a Wal-Mart, but Wal-Mart has no problem drawing people to its stores. Even if you don't enter a Wal-Mart, it's a near certainty that you have seen one of their parking lots while driving by. Unless it's late at night, the parking lot is always packed.

While Wal-Mart might not be your favorite haunt, it's not likely that Sears is either. If you're looking for home appliances, you're more likely to visit a Home Depot or Lowe's. If you're looking for apparel, then there are too many retail options to list. If you desire electronics, then you're most likely going to opt for Target, Wal-Mart, Apple, Best Buy, or Amazon. In short, Sears is facing competition from every angle. This is why Sears Domestic saw a 4% comps decline in the third quarter, primarily due to weakness in electronics, lawn and garden, tools, home appliances, apparel, and Sears Auto Centers. Sears Home stood as the one bright spot.

If you're long Sears, then you might hold out hope because of the Kmart brand. However, Kmart comps declined 2.1%, primarily due to weakness in grocery and household, drugstore, consumer electronics, and toys. However, Kmart did show strength in apparel, as well as seasonal and outdoor.

So where does the potential come from?

Transformation
Sears is transforming from a traditional department store into a membership-centric retailer. The main focus here is Shop Your Way, which allows consumers to shop in-store, from home, and on digital devices. Members will earn points on every purchase, including 10% in points on the first $1,000 spent and 5% in points in transactions over $1,000.

The good news is that Shop Your Way purchases now account for 70% of sales, up from 65% of sales last quarter. The bad news is that this promotional strategy hasn't been enough to drive top-line growth over the past year: 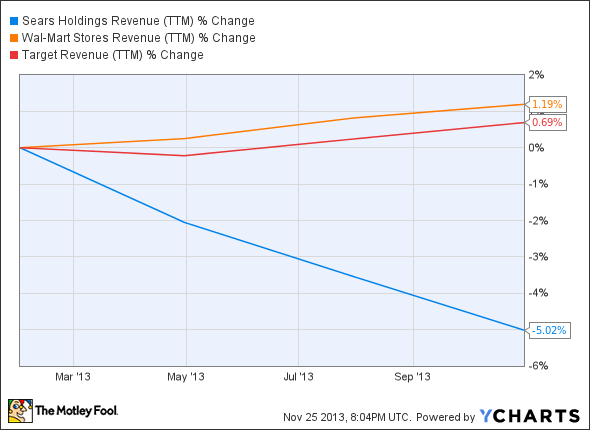 Regardless of where you shop, Wal-Mart has been more effective with its promotions than Sears. Wal-Mart recently stated that it will match competitors on any Black Friday deals, which began on Nov. 22. Wal-Mart also stated that Cyber Monday savings will begin on Nov. 30 and it offers up to 60% off, with free shipping on orders over $35.

Though the chart above doesn't indicate strong growth for Target, U.S. sales improved 2% in the third quarter year-over-year, with comps increasing 0.9%. Target is on track for 124 stores throughout Canada by the end of the year (strong top-line potential), and its 5% REDcard Rewards and price-matching strategies have been effective.

Target and Wal-Mart generate positive cash flow, and lots of it, which leads to generous shareholder returns, including above-average yields. This will also make it much easier for Target and Wal-Mart to pay down their debts, which shareholders like to see. For Sears, it will be a challenge to pay down debt and grow the top line simultaneously. The best shot for Sears is now, prior to interest rate hikes. Fortunately for Sears, those could be a long time from now.

The bottom line
Sears is a highly leveraged company with negative cash flow generation, no top-line growth, negative comps for its namesake brand and Kmart brand, no yield, and it's facing competition from every angle. It's possible that you will see stock appreciation in the near future, but the long-term picture doesn't look promising.