2013 was a great year for the biotech industry as a whole, but Achillion, Prosensa, and Amarin didn't share the joy.

2013 has been a remarkable year for health care, with the iShares NASDAQ Biotechnology Index up more than 50%. Not everyone was invited to the party though, and there are always lessons to be learned from companies that missed the boat. There are lots of examples, but some of my favorite stories of 2013 come from Achillion (ACHN), Prosensa (NASDAQ: RNA), and Amarin (AMRN -3.36%). 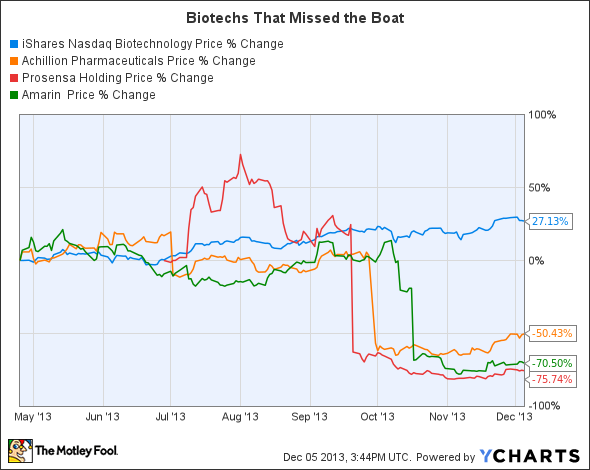 Aching Achillion
Gilead, Johnson & Johnson, and AbbVie are some of the biggest names in health care. They're also the biggest players in a battle for control of a massive hepatitis C market. Achillion would have had a mountain to climb in competing for market share, but it never even made it to base camp after its experimental drug sovaprevir was put on clinical hold by the Food and Drug Administration. Achillion's lead drug candidate showed adverse drug-drug interactions and elevated liver enzymes in a phase 1 trial, though a phase 2 trial was allowed to continue. The news sent the stock down 25% on July 1, and then 58% on Sept. 30 after the FDA upheld the restriction. With $173 in cash Achillion isn't down and out yet, and is continuing to push other hepatitis C candidates through the pipeline.

Prosensa pains
Prosensa didn't wait long after its June IPO to stir up news, as its lead drug candidate for Duchenne muscular distrophy failed to meet its primary endpoint in a phase 3 clinical trial. Drisapersen, developed with partner GlaxoSmithKline, is a novel exon-skipping oligonucleotide that aims to correct the disorder at the genetic level. Unfortunately, it didn't produce a statistically significant improvement in walking distance over six minutes. Now shares are trading down 30% from the IPO price, and Prosensa is mining its data for some glimmer of hope.

The result wasn't only a blow to patients and shareholders, but also to Sarepta (SRPT 1.00%) and its shareholders. Sarepta is developing a similar drug that appears more potent, but with doubts raised by drisapersen the FDA suggested that Sarepta's eteplirsen will not gain accelerated approval. That announcement sent Sarepta shares down 70%, and now investors are asking if its time to pick up more shares at value prices.

Amarin woes
I've written before that Amarin's Vascepa is the gift that keeps on giving as far as news is concerned; in terms of returns, not so much. Amarin has plunged 75% year to date on one of the most discussed stories in the sector. Vascepa, a high-dose fish oil pill, is approved to treat patients with severely high triglycerides, but Amarin was seeking to enter the massive market for drugs that treat moderately high triglycerides. Clinical trials were promising, but then an FDA panel voted not to recommend label expansion, citing concerns that triglyceride reduction doesn't translate into a clinically meaningful benefit. Now Amarin is left to prove that a benefit does exist in the long-term REDUCE-IT trial, if its $225 million in cash and equivalents and cost-cutting initiatives can carry it long enough.

The bottom line
There are certainly gains to be made in speculative biotech investing. But these three cases serve as warnings against investing in development stage companies with limited prospects, no matter how low the risks might seem. As you move forward into 2014, make it your New Year's resolution to invest more Foolishly in biotech by choosing established companies with diverse revenue streams.