It's been a brutal year for Amarin (NASDAQ:AMRN), which has lost more than 76% of its market value since the beginning of 2013. The maker of fish oil drug Vascepa, a treatment for severe hypertriglyceridemia (triglyceride levels equal to or higher than 500 mg/DL), was struck down by four main factors:

Combine all those factors and the overall outlook for Vascepa, Amarin's only marketed drug, looks pretty bleak. 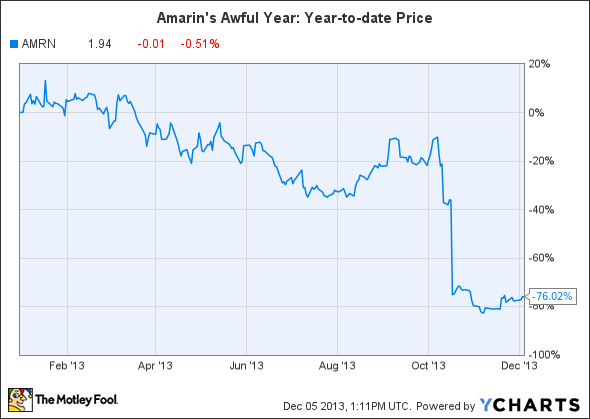 Let's take a look at three Foolish investing lessons we can learn from Amarin's decline.

Lesson No. 1: Drug timing is everything
Amarin bulls believed Vascepa was superior to Lovaza for one primary reason -- it didn't raise LDL ("bad") cholesterol levels as it reduced triglyceride levels, while Lovaza did. During clinical trials, Vascepa was found to lower LDL levels by 2% while Lovaza raised levels by 45%.

Although Vascepa appeared to be the superior choice in fish oil treatments, it arrived too late, launching in January 2013 -- that was nine years after Lovaza was released in the U.S. by Reliant Pharmaceuticals, which GSK acquired in 2007.

By the time Vascepa launched, there was evidence that demand for Lovaza had peaked, as seen in this comparison of the two drugs' sales over the past year.

The other problem is that Amarin, with only $226 million in cash last quarter, lacked a major pharmaceutical partner with the marketing muscle to go toe-to-toe against GSK, which finished last quarter with a cash hoard of $5.3 billion.

Things might have turned out differently if AstraZeneca or Teva, two rumored suitors for Amarin, had either bought or partnered up with the company. Instead, AstraZeneca purchased Amarin rival Omthera earlier this year for $443 million, giving it access to Epanova, and Teva decided to pursue production of generic Lovaza instead.

Lesson No. 2: What hurts your biggest competitor can hurt you more
Since Amarin arrived so late to the market with Vascepa, it barely had a chance to make an impact before a U.S. court ruling in September cleared the way for Teva and Par's generic Lovaza to arrive in the near future.

This ruling didn't matter much for GSK, since sales of Lovaza had apparently peaked, only accounting for 2% of the company's top line last quarter. GlaxoSmithKline investors were likely more concerned with the fate of Advair, the blockbuster asthma and COPD (chronic obstructive pulmonary disease) drug that accounts for nearly a fifth of its top line. The U.S. patent for Advair's medication expired in 2010, while the patent will expire in Europe later this year.

Yet for Amarin, Vascepa represents everything -- 100% of its revenue and 100% of its pipeline. Declining Lovaza sales and generic competition will only further fragment the market for severe triglyceridemia, eventually marginalizing its tiny sliver of the segment.

Therefore, even though Teva and Par weren't gearing up to produce generic Vascepa, the market interpreted generic Lovaza as the same thing, punishing Amarin much more harshly than GSK.

Lesson No. 3: Having more eggs in a basket is better than painting one egg three colors
Last but not least, Amarin's fall highlights the dangers of having a single egg in the basket, which characterizes plenty of other small biotech companies as well.

If Amarin had a few other experimental drugs in its pipeline, investors could at least look forward to better results from other clinical trials. Amarin's pipeline, however, consists only of Vascepa for three indications -- severe hypertriglyceridemia (approved in the U.S.), high triglycerides in patients with mixed dyslipidemia (phase 3 trials completed), and the reduction of cardiovascular events (early phase 3).

Since the second indication, also known as ANCHOR, is nearly guaranteed to be rejected by the FDA after the October advisory meeting, the only hope left for Amarin is the third indication, known as REDUCE-IT. Unfortunately, the REDUCE-IT trial isn't expected to be completed until late 2017 -- a very long time for investors to wait for possibly positive results.

Compare Amarin to Achillion Pharmaceuticals (NASDAQ:ACHN), which also plunged in October after the FDA retained a hold over its lead hepatitis C drug candidate, sovaprevir, due to abnormal liver results. Achillion investors were disappointed, but they could at least look forward to better results from the company's three other experimental hepatitis C treatments -- giving them a faint glimmer of hope that Amarin investors now desperately need.

The Foolish takeaway
In closing, Amarin should teach us three things -- that a superior treatment can flop if it launches too late, generic competition for a competing treatment can oversaturate the market, and putting a few more eggs in a basket can keep hope alive in case a leading drug fails.

For now, Amarin's best hope is to boost sales of Vascepa for its approved indication -- which could be extremely tough considering that the company laid off 50% of its global staff after the negative FDA panel reaction in October.