"A few, however, have very poor returns, a result of some serious mistakes I made in my job of capital allocation." -- Warren Buffett

A fair rule of thumb is that if Warren Buffet claims to have made mistakes doing something, it's probably very difficult. That's why I'll be digging into three quotes from Huntington Bancshares' (NASDAQ:HBAN) CEO Steve Steinour on his key capital priorities for 2014. While comparing them to similar regional banks Fifth Third Bancorp (NASDAQ:FITB) and KeyCorp (NYSE:KEY).

"We're going to grow our core business. About eight out of nine households within a five-mile radius of our branches still are not our customers."

Huntington Bancshares has hoards of loyal customers because of the bank's outstanding customer service, however, loyal customer's pockets are only so deep, and eventually, the bank will need to branch out (pun intended) and create new clientele.

First, take a look that the average yield on loans and checking accounts, so we can get an idea what the average customer could assume to pay or earn.

Here's the problem: The most obvious way to draw in new clientele is to charge lower interest rates -- but after a quick look at auto and home equity loans, that doesn't seem to be the case. Another easy way to attract customers is to offer higher interest rates on deposits, but again, Huntington Bancshares has by far the lowest-yielding deposits.

A strong advertising campaign, though, can often overcome better pricing. Huntington Bancshares, however, cut marketing by roughly $21 million in the third quarter, from the same time in 2012.

With the exception of small promotions and fantastic customer service, which could possibly create word-of-mouth advertising, you would be hard-pressed to pinpoint what exactly is going to bring in new customers. For investors, keeping an eye on deposit growth will be a fair indicator of Huntington Bancshares' ability to draw in new business.

"We will continue to support the dividend"

Dividends for investors are like children and toys; they love getting them, but boy do they throw a fit when you threaten to take them away. Luckily for Huntington Bancshares investors, CEO Steve Steinour has made supporting the dividend a chief priority. 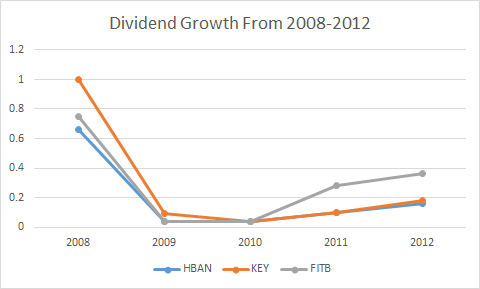 As displayed above, dividends were on the way down in 2008, and that trend would continue until 2010, when dividend growth returned. So, for investors concerned about dividends (and who isn't?), they seem to be slowly but surely working their way back.

"We're probably in a position where we have to accelerate some of our digital investments."

Any bank that doesn't think it needs to be investing in technology is living in the Stone Age and, as far as this investor is concerned, will be obsolete starting yesterday. For now, though, having a strong mobile banking app is critical to staying competitive.

All three banks earned an underwhelming two and a half stars out of five on iTunes for its mobile banking app. Huntington Bancshares reviews are up and down, mostly down, but customers are begging for photo check depositing capabilities, a capability that both Fifth Third and KeyCorp's apps feature.

Ultimately, Huntington Bancshares doesn't need to lead the pack in technological advances, but it does need to stay with the times. If it's unable to do so, the bank may begin to lose business from younger customers and business owners who rely on the ability to bank on the run. Moving into 2014, investors should hope to see Huntington Bancshares put some capital behind the idea and develop, at least, a mobile app with the check depositing capabilities that its customers demand.

Looking ahead
There are few, if any, responsibilities for a CEO more important than capital allocation. Steve Steinour, however, has firmly established which elements of the company deserve to be capital priorities: growing core business, supporting the dividend, and a bevy of others, including investing in technology.

As for the future, while Huntington Bancshares is one of the best at retaining customers, it'll be interesting to see if the bank can grow its customer base. If it's successful, Huntington Bancshares would be a slam-dunk investment, and the strongest option among the banks discussed today.