Hanesbrands (NYSE:HBI) has made its investors happy over the past year after its stock appreciated 96.4%. Whether you're familiar with Hanes (the company's largest brand) thanks to Michael Jordan commercials, or because you wear the inner-wear, it's not likely that you know much about Hanesbrands the company.

For starters, it offers many other popular brands, including Champion, Playtex, Bali, Flexees, JMS, Wonderbra, and Maidenform. The latter will be discussed soon, as it plays an important role in the company's future potential. We'll also see if L Brands (NYSE:LB) -- best known for Victoria's Secret, PINK, and Bath & Body Works -- or Perry Ellis (NASDAQ:PERY) -- designer and marketer of Anchor Blue, Axist, Ben Hogan, Perry Ellis, Gotcha, Farah, among many other brands -- might offer more potential in the textile/apparel-clothing space.

Mixed results and future excitement
In the third quarter, Hanesbrands saw net sales slide 2% to $1.2 billion year over year. However, on a constant-currency basis, the net loss was less than 1%. Earnings per share advanced 11% to $1.23, with supply chain strength, innovations, and margin improvements being the key drivers. Chairman and CEO, Richard A. Noll, also stated that the company's brands were gaining share.

The above results lean toward the positive side, but despite having taken place back in July, the Maidenform acquisition is still the big news. Hanesbrands acquired Maidenform for $583 million in cash. This put a hit on Hanesbrands' balance sheet, which is now leveraged, with $132.3 million in cash and short-term equivalents versus $1.4 billion in long-term debt.

The good news is that Hanesbrands generated approximately $496.5 million in operating cash flow over the past year. Therefore, it should be capable of reinvesting in its business, paying down debt, and returning capital to shareholders.

The most exciting aspect of the Maidenform acquisition is that within three years, it's expected to lead to annual increases of $500 million in sales, $80 million in profit, add $0.60 to EPS, and $65 million in free cash flow. If these numbers prove to be correct, then investors are likely to see stock appreciation as well as the possibility of an increased dividend.

Currently, Hanesbrands yields a decent 1.1%. While this isn't the most generous yield you will find, it's better than what you will find at L Brands and Perry Ellis, which don't offer any yield. However, this doesn't guarantee that Hanesbrands is likely to be the best investment of the three. We'll get to that soon. For now, let's take a look at what Hanesbrands expects to see for its own company in the near future.

Near-term expectations
Do you play poker? Many investors and traders do, simply because they enjoy strategy. One strategy that players use is to trust the reads of other players they respect. For instance, if your radar (reading ability) is off on a given day, then you can watch how the best player at the table responds to a bet from a third party. Trusting that read is often a successful approach when your radar is off.

Hanesbrands has taken a similar approach to the current economic environment. It has taken a conservative view to its fourth quarter primarily because retailers are cautious. Companies rarely report taking this approach, at least from what I have seen reading through hundreds of 10-Q and 10-K filings, yet it's logical.

The good news for Hanesbrands is that it sells a diversified range of products, which should limit downside potential. Its higher-margin products are intimate apparel and men's underwear. Its lower-margin products are casual-wear and active-wear. If the company ever runs into margin trouble, it has the ability increase its intimate apparel and men's underwear offerings while cutting its casual-wear and active-wear items.

Despite offering product diversification, Hanesbrands is still sensitive to consumer spending habits. The company recently stated in its 10-Q filing that it's concerned about consumer debt, the availability of consumer credit, taxation, and unemployment. However, these factors are outside of the company's control. Hanesbrands can only do its best to grow despite external circumstances.

While Hanesbrands has been navigating the current economic environment well by keeping costs low, gaining share (according to Noll), improving its top-line potential with its Maidenform acquisition, and offering a 1.1% yield, it's possible that one of the other aforementioned companies offers more potential.

Hanesbrands vs. L Brands vs. Perry Ellis
Investors want to see top-line growth, which often indicates increased demand and/or price increases. According to the one-year chart below, L Brands has been the top performer in this area: 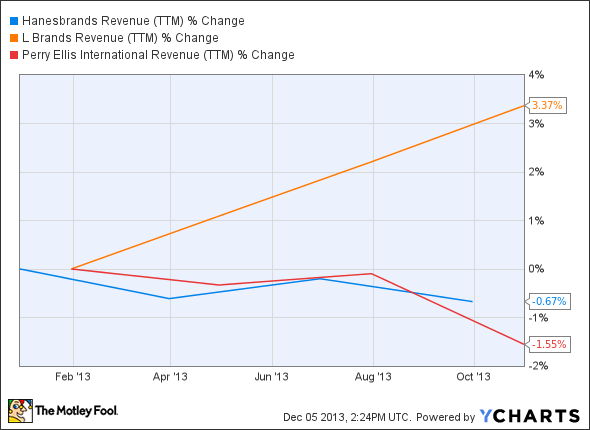 L Brands has also reported seeing recent increases in transactions at Bath & Body Works and Victoria's Secret. The company's November sales came in at $988.5 million versus $922 million in the year-ago quarter. Comps slid 5% for the month, which is surely a negative. On the other hand, for the 43 weeks ending Nov. 24, sales jumped 6%, with comps increasing 2%. Therefore, the big picture still looks good.

A comfortable investment?
Hanesbrands is a low-cost operation that continues to improve margins while increasing its top-line potential thanks to the Maidenform acquisition. On the other hand, demand hasn't been high as of late, and the company is sensitive to macroeconomic conditions.